Martin and Anna Arndorfer are open-minded, curious, and committed to nature: these qualities have established them as some of the most sensitive and forward-thinking of winemakers in northern Austria. Both Martin and Anna come from a long line of vignerons (Anna is from the Steininger family), and their travels before taking over Martin’s family winery were formative, introducing them to progressive ideas on farming and vinification. Their personal experiences and family backgrounds, paired with their strong and creative personalities, caused the duo to break sharply with Kamptal tradition when they returned home to forge their own path. Now, in a short span of years, Arndorfer is one of the brightest stars in the natural wine world and a reference point for the new generation of Austrian winemakers.

The winery’s ethos comes from the belief that profound wine must be a pleasure to drink and a pleasure to make, and it shows in the wines. You can tell they’re having fun, given the diversity of their offerings, the constant exploration and refining of their expressions of different sites and varieties. They aim to carry “the message from the vineyard” in its fullest form, and their path is minimalism in the cellar. Specifically, this means no sulfur added at crushing, no fining of the must, no adding yeast or even a ‘pied de cuve,’ no stopping malo, no cold stabilization, the very gentlest (if any) filtering, and no additions beyond small levels of sulfur at bottling.  Especially in Austria, which is still relatively conservative in winemaking overall, a lot of producers consider this very risky, but Martin & Anna aren’t concerned–they are confident their wines develop their own microbial stability through a lack of manipulation. 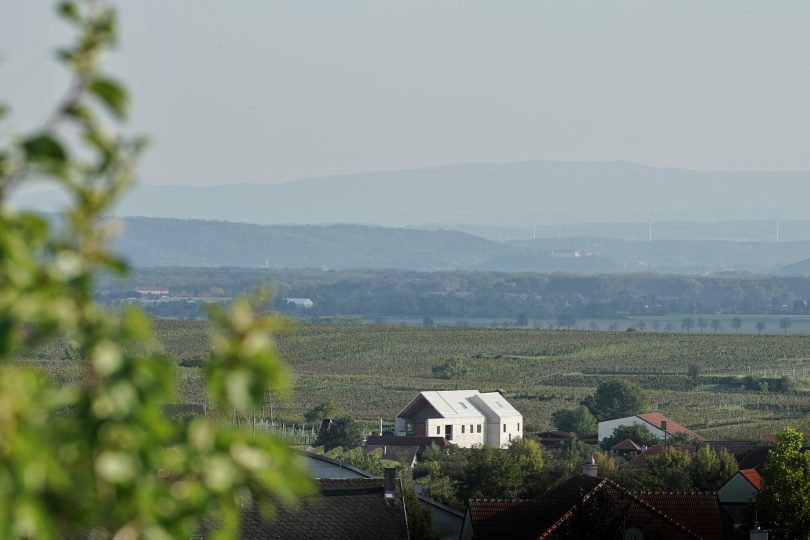 All the wines come from estate vineyards in the Kamptal, however, the Arndorfers have long since stopped caring if the wines are deemed “typical” enough to carry the appellation.  The Kamptal is a cool climate region, named after the Kamp river, which flows through the area before emptying into the Danube. Very high diurnal shifts create thick skins in fruit here, which leading to powerful aromas and strong acidity. Microclimates, however, change considerably from hillside to hillside, vineyard to vineyard; altitudes range from 200 to nearly 500m. Small valleys between the hills work like channels, where cold winds from the northern regions chill the vineyards during the night. The Arndorfer winery and vineyards are located in and around the village of Strass im Strassertale–an area with a special microclimate, the first south-facing slopes near the Danube flats. This whole area is defined by the unique combination of the very old mother rock of the Bohemian Massif and the particular, continental influence of the Pannonian climate.

As Anna and Martin eloquently put it, “Because of our experience that nature is the strongest force, we love to work with her. Because of the knowledge that soil is the most intelligent thing we deal with, we’ve decided to trust him. Because of our beliefs that plants nourish our soils, we let them grow. With these ideas and confidence, we don’t interact in the cellar, which lets our wines transport the natural taste of the grape. These decisions we make by ourselves, and we let our personalities speak in our wines. We think that winemakers are artisans, or even artists. Their work requires creativity, sensitivity and an enormous amount of personality. Everything you would attribute to an artist… We have made it our task to produce wines that unite origin and passion, wines that arouse curiosity in the wine world across the globe.”

The Arndorfers’ philosophy gets them into a bit of trouble with the establishment in Austria, but they’re so gracious and non-confrontational that it hasn’t been a huge setback; there are no big fights with the authorities about what goes on the label, and so on. They’ve long ago accepted that the Arndorfer style may not be adopted by the mainstream in the near future (or ever), and if that means they can’t put the appellation on the label in certain cases, so be it.  It is much more important to them to remain “free, creative, and independent” and to follow their ideas. Martin says, “For economics, it seems crazy and stupid. But so far the world has been big enough to find people interested in other styles.” 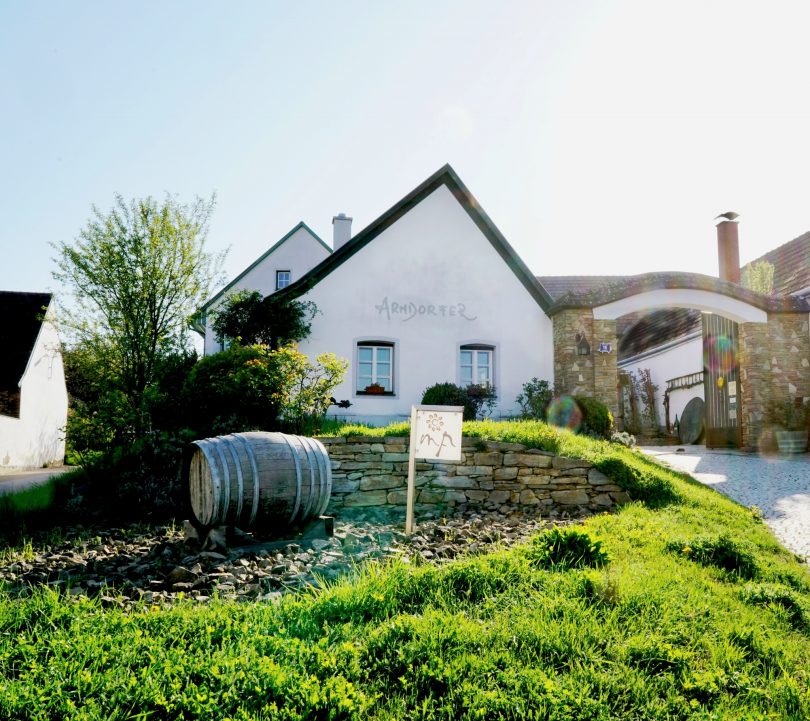 "Nature is the strongest force, we love to work with her. Because the knowledge that the soil is the most intelligent thing we deal with, we‘ve decided to trust him. Because the beliefs that the plants nourish our soils, we let them grow." - Anna and Martin Arndorfer 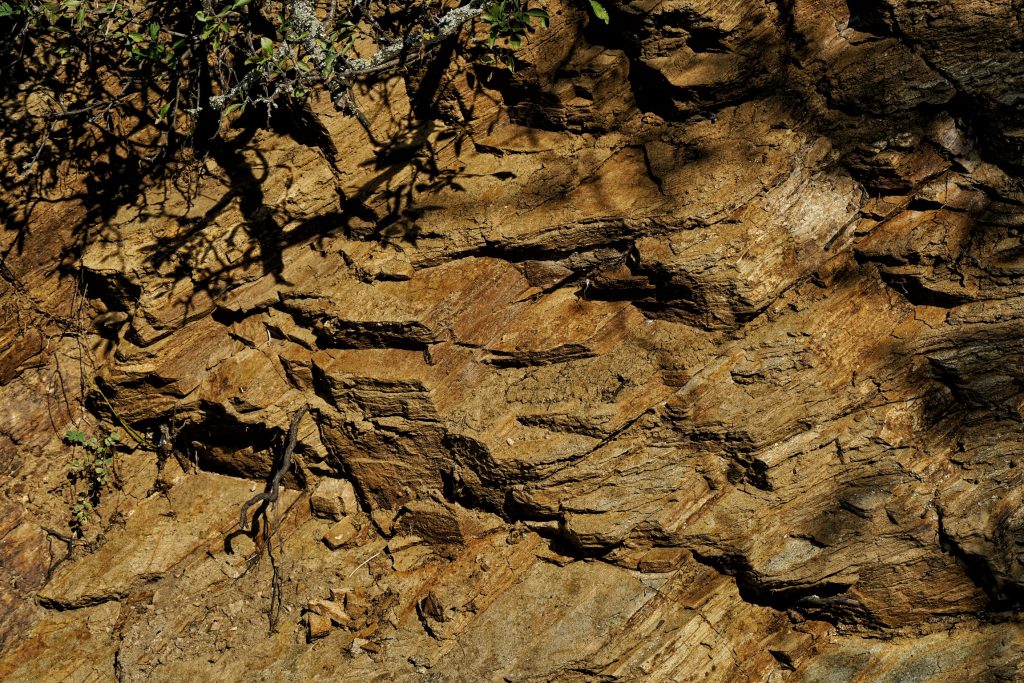 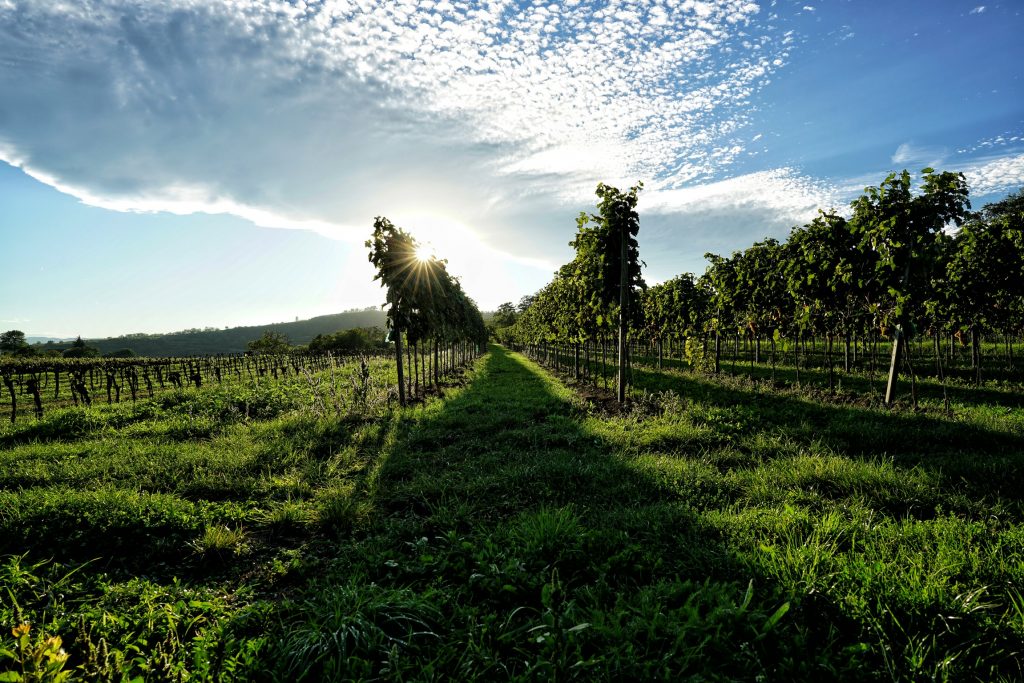 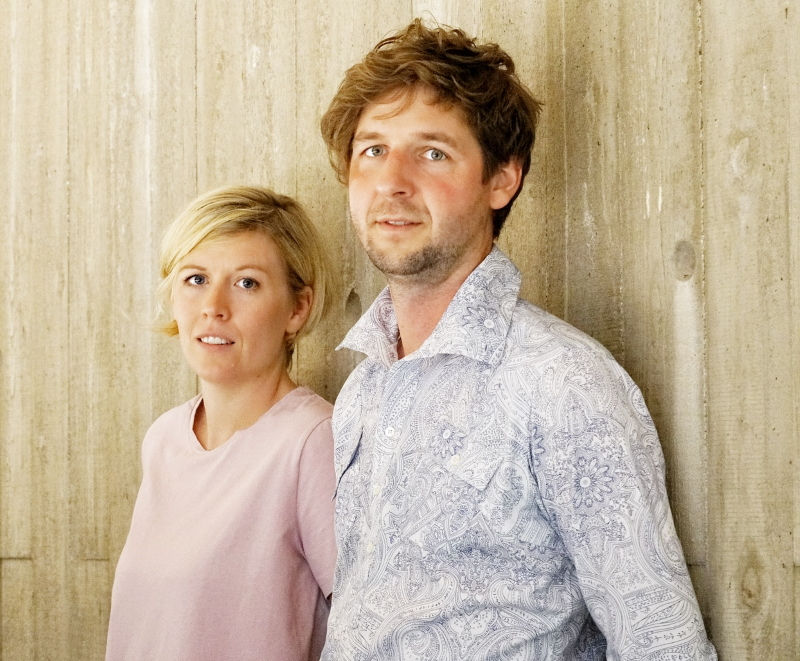 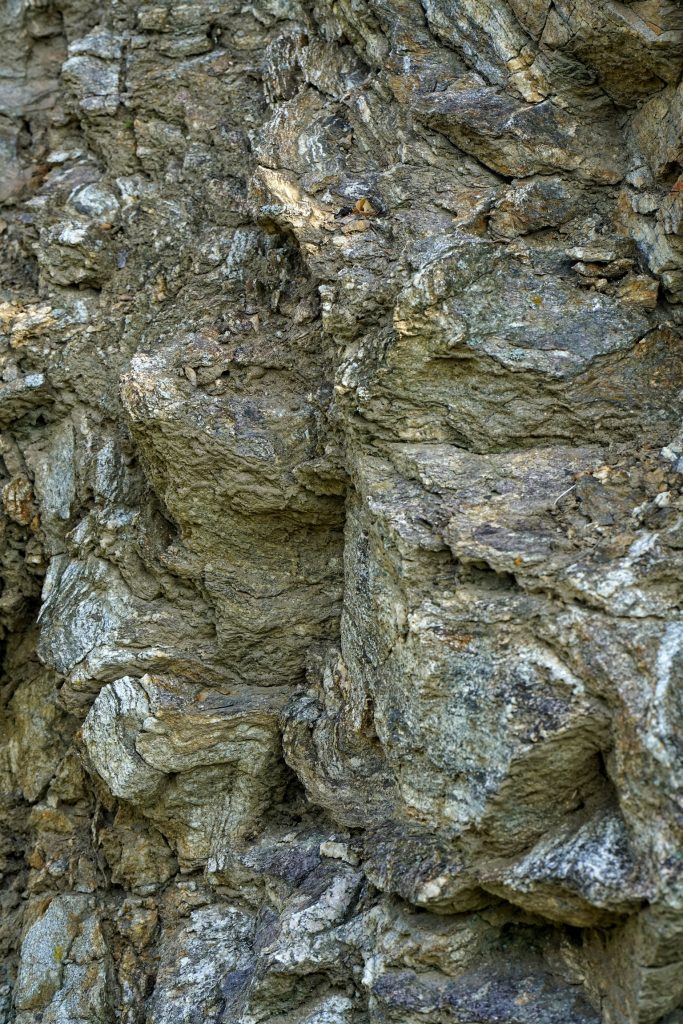 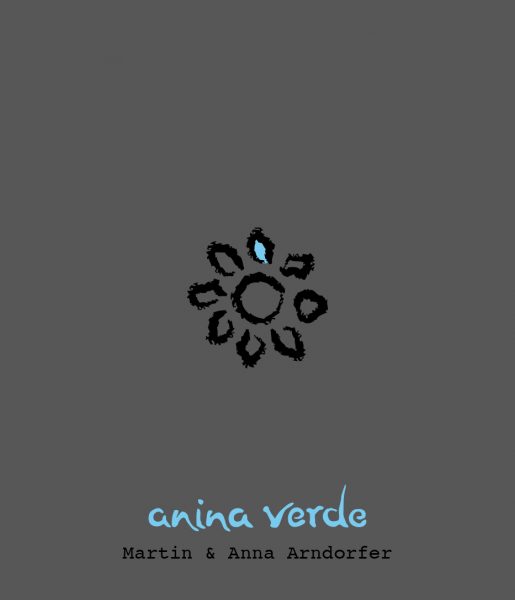 Certified Organic. Grüner Veltliner fermented on Riesling skins for ten days to gain more fruit expression and complexity. (To underline the labor-intensive quality of the way this wine is made: after the Riesling grapes are pressed whole-cluster, the Arndorfers take the pressed bunches out and separate the skins from the stems by hand.) Aged for four months in 2/3 stainless steel and 1/3 in used French oak barrels. 8 mg/l SO2 added before bottling. Unfined, unfiltered, and handled by gravity. One of three newer, experimental natural wines named after Martin’s three daughters, a way for him to continue pushing the limits of his winemaking. 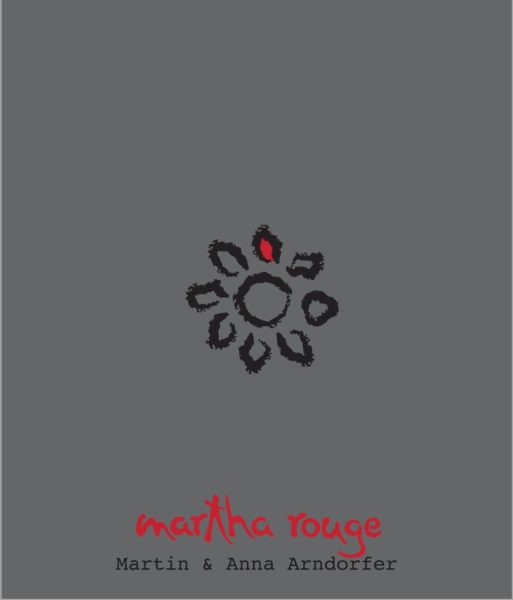 Certified Organic. Whole-cluster Zweigelt co-fermented with crushed Sauvignon Blanc.  Maceration on the Sauvignon Blanc and Zweigelt skins for fourteen days; then pressed off and aged for six months in used French oak. 8 mg/l SO2 added before bottling. Unfined, unfiltered, and handled by gravity. One of three newer, experimental natural wines named after Martin’s three daughters, a way for him to continue pushing the limits of his winemaking. 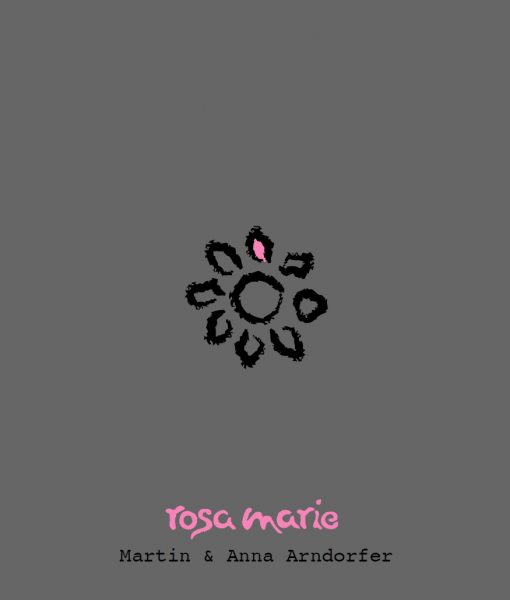 Certified Organic. Zweigelt macerated for around 14 hours on skins before direct pressing, then fermented crushed Grüner Veltliner grapes for 14 days in stainless steel–in other words, this is a rosé made like an ‘orange wine’ but with red fruit on white grape skins! During fermentation, the Grüner skins add spiciness and complexity to the black and purple fruit aromas of Zweigelt. To make things as hands-on as possible, all of the skins are hand-destemmed.  Aged for six months in 2/3 stainless steel and the rest in neutral French barriques. Bottled by gravity with no fining nor filtration. 8 mg/l SO2 added at bottling. The Rosa Marie is the second of three newer, experimental natural wines, named after Martin and Anna’s three daughters, as a way for them to continue pushing the limits of their winemaking. 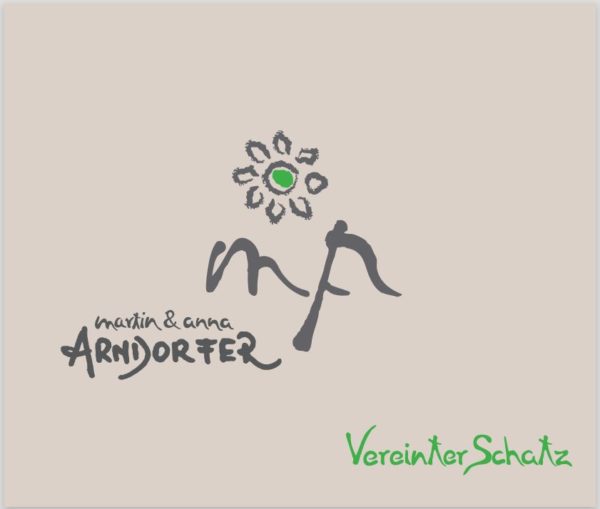 Certified Organic. 80% Zweigelt, 20% Pinot Noir, younger vine parcels planted on loam and gravel. ¾ of the fruit is kept whole-cluster, 10% destemmed but kept whole-berry, and the final 20% is destemmed and crushed. 10 days in wooden fermenters for before pressing, then aged for six months in a combinatino of 2000L neutral barrels, with the remaining 30% in neutral 228L barrels. Unfined, unfiltered, with 10 mg/liter SO2 added at bottling. An ideal example of what woodsy, lighter Austrian red wine can be. 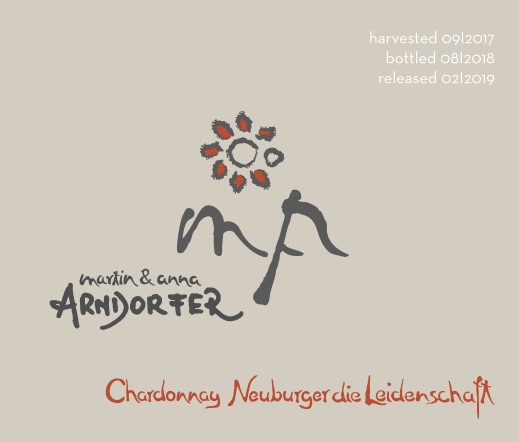 Certified Organic. 50% Chardonnay, 50% Neuburger, from two different vineyard sources on chalk and loess respectively.  Both vineyards are picked on the same day and pressed together; the Neuburger macerated for eight hours on skins before pressing; the Chardonnay was added whole-cluster to the Neuburger mash, then pressed immediately.  Aged for 10 months on the lees in neutral French oak barrels, no batonnage or racking. 20mg SO2 added at bottling. A striking wine: Arndorfer’s Kamptal answer to Burgundy, with the Neuberger adding something slightly tropical and herbal. The 2018 is the final vintage of this wine, as these varieties will be blended into a single-vineyard white blend, something of a Grand Cru bottling for the Arndorfers, in the coming years! 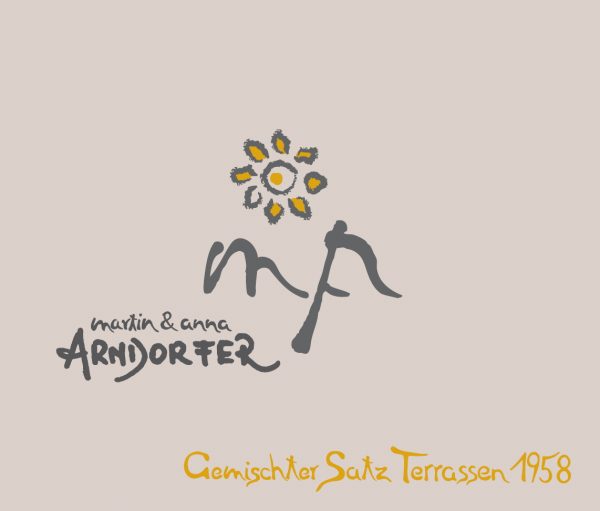 Certified Organic. A blend of 60% Neuburger, 25% Grüner and 15% Riesling, a traditional mix in this part of the Kamptal. It’s a single field-blend vineyard, planted in 1958 on loess soils. All grapes were macerated four hours on skins before pressing whole-cluster; fermented and aged in a mix of wood and steel. Martin bought this parcel on the Wechselberg from an older farmer in 2005: most of the terraces on this hill had been reworked and widened for tractors, but this little bit was the last piece with skinny terraces and old vines. Martin’s grandfather said that if Martin bought the parcel, he was going to lie to his friends at the café in town and say he knew nothing about it. Now, thankfully, we have this stunning old-vine Gemischter Satz, completely worked by hand. 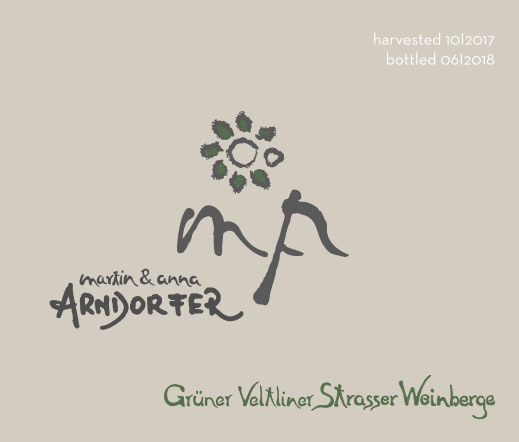 Certified Organic. 100% Gruner Veltliner. Sourced from 4 different vineyards: Gaisberg, on loess soil with primary rock subsoil; Wechselberg, on heavy dark clay with high amounts of chalk; Hasel on deep loess; and Stangl, also on deep loess. These are all south-facing terraces with altitudes between 200-330, planted between 1959 and 2000. Whole cluster pressed, with no maceration before. Fermented with native yeast and aged for 11 months, 80% in large neutral barrels and 20% in stainless steel. (Barrels are between 1200-1900L!) Sulfur added once (20 mg/l – just before bottling. ‘Strasser Weinberge’ is a protected name for more-or-less village wines for the Arndorfers, which show you all the faces of the variety and the village of Strass in general. Ethereal and powerful all at once: we wish every Kamptal Grüner had this much layering and soul. 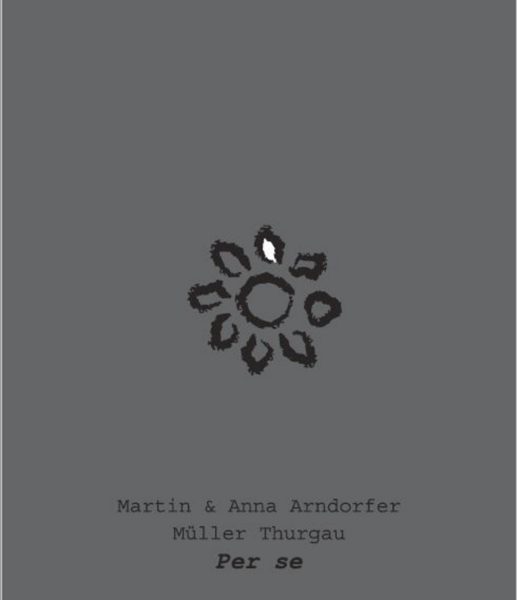 Certified Organic. The very first vintage of this particular wine. Martin loves Müller-Thurgau made with skin contact, and this special example of the style comes from a single vineyard called Merschein. The vineyard is located in a tiny little side valley behind the Gaisberg and Heiligenstein, with vines planted in 1976—it has a similar soil profile to the famous Heiligenstein: lots of primary rock and loess. The vineyard is also relatively chilly, which results in a long, slow growing season for Müller-Thurgau. The resultant wine is only around 10% ABV! Unfined and unfiltered, with a small amount of SO2 at bottling. An amazing example of a variety that’s too often considered humble or as only being floral and flabby. Refined, light, pithy and pretty. 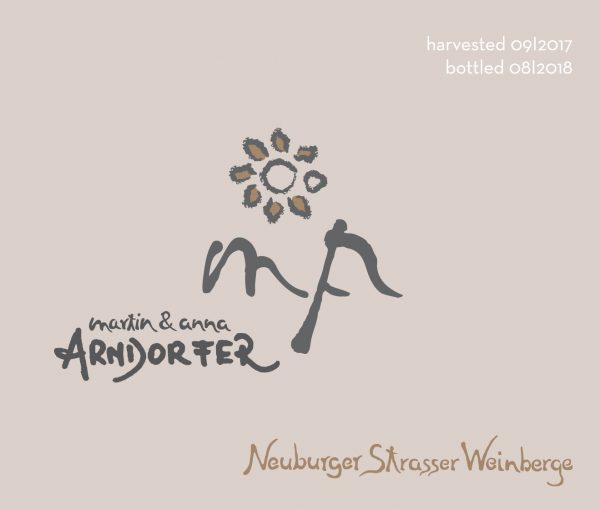 Certified Organic. 100% Neuburger, from 3 different high-quality vineyards. Plantings of this variety have decreased significantly in the past 20 years in Austria, due to the challenges of producing great wines with this grape that’s prone to botrytis; it’s easier for most growers to just plant some Grüner and call it a day. Martin describes their Neuberger as elegant and expressive, with earthy and nutty aromas, a long and persistent palate, and a very salty quality, due to the intensity and ubiquity of the primary rock on which their Neuberger parcels are planted. An excellent cousin of something like a savory, textural Chablis. 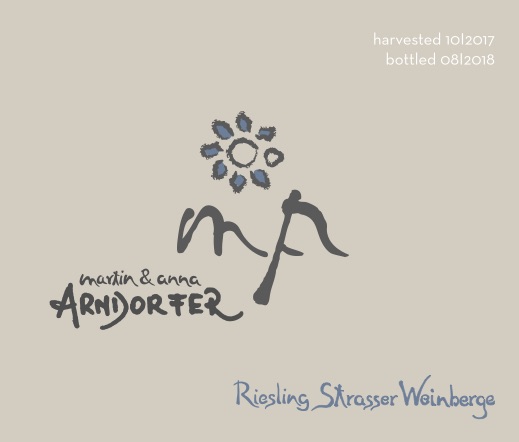 Certified Organic. 100% Riesling. ‘Strasser Weinberge’ more or less translates to ‘Strass Hills,’ i.e., something like a village level for how Martin ranks his vineyards. These Riesling vines come from a few vineyards in the immediate surroundings of Strass—altitudes between 230-360m, planted between 1986 and 2010, fermented & aged in a combination of large format neutral French oak and stainless steel barrels. Jasmine tea, peach and apricot: no petrol or odd earthiness on this Riesling with a bit of age—just elegance. A great, nimble response to the monolithic 14% Rieslings that garner all the scores and attention in the more classical wine circles of this region. 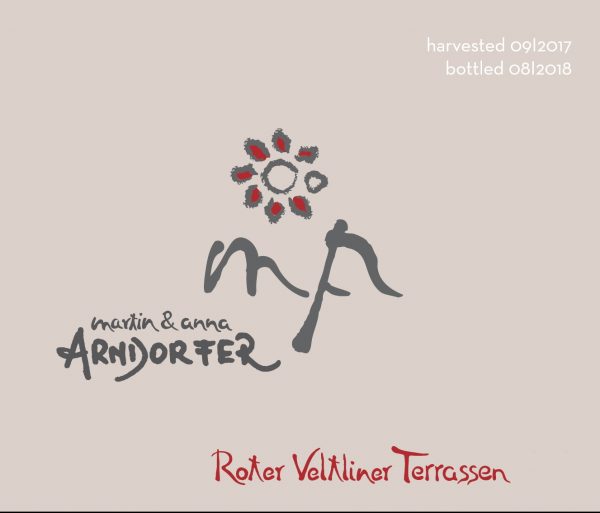 Certified Organic. This rare bird Roter Veltliner is sourced from a tiny vineyard called Zöbinger Gaisberg: south-facing terraces planted in 1979 on pure primary rock, in this case gneiss. Rarely does the much-maligned Roter get to inhabit such hallowed terroir as the upper altitudes of the Gaisberg; one generally only finds Riesling here. (It’s a bit like planting Aligoté in Perrières or Dolcetto in Cannubi). Martin purchased this site against the advice of his father in 2010, specifically because of the old-vine Roter and the opportunity to make a benchmark expression. Flashy, kaleidescopic, smelling of red peppercorn, dragonfruit, lemon verbena, Haribo sour candy. Crazy stuff, and no one else makes anything like it.