Aurélien Chatagnier created his own domaine in 2002 while he was just in his early 20s. He doesn’t come from a winemaking family, but as a teenager he worked in the vines for Domaine Jamet, where he became inspired to learn more about winemaking. He worked for several years with François Villard, who eventually pushed him to head out on his own. Starting with just over 1 hectare of rented vines, Aurélien has steadily built up a domaine of almost 10 hectares by purchasing, bartering, and replanting vineyards around the town of St-Pierre-de-Boeuf at the Northern extreme of the Saint Joseph appellation. The vineyards are predominantly granite and extremely steep. The house style runs towards a lean, pure style of winemaking, and shows the reason why some of the best producers in the area decided to pass the torch over to Aurélien as one of the best young winemakers in the region. Aurélien farms organically and employs a light touch in the cellar where he favors native yeasts, mostly used oak, limited extraction, and bottles without fining or filtration.

“One of the best young winemakers in the region” -Josh Adler, Paris Wine Company 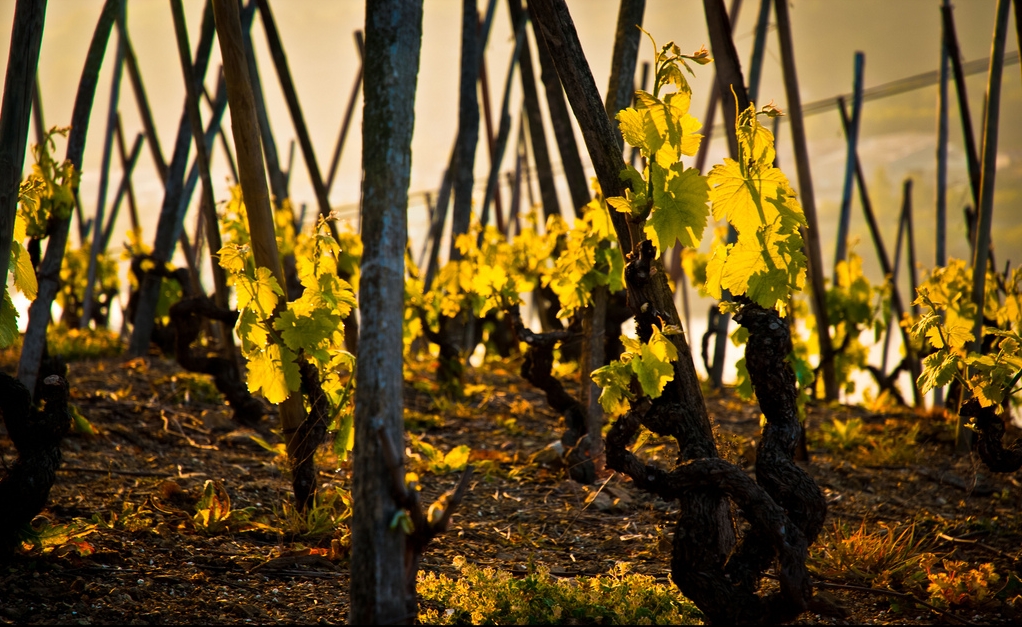 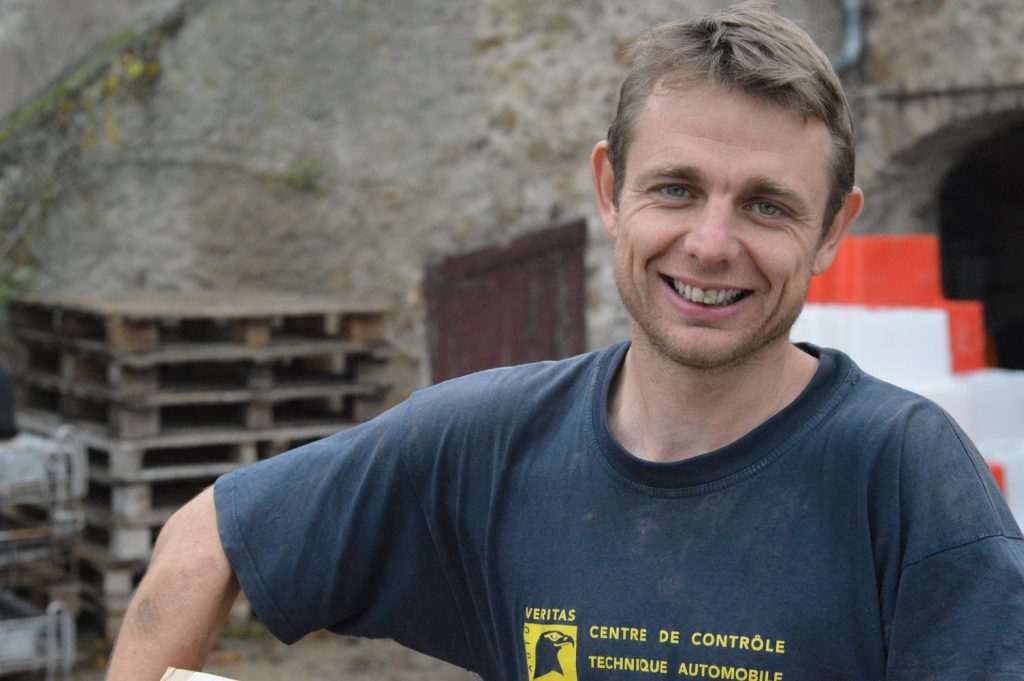 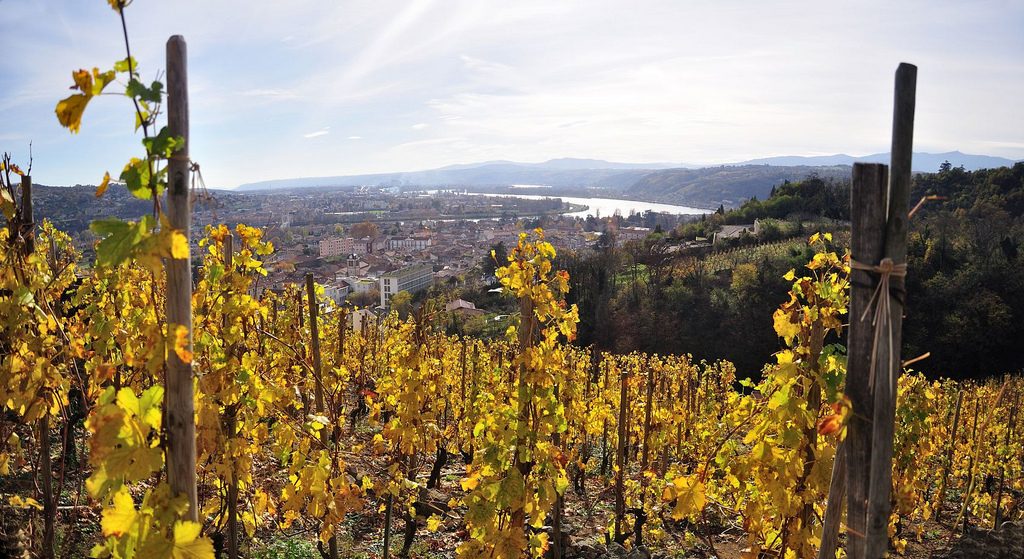 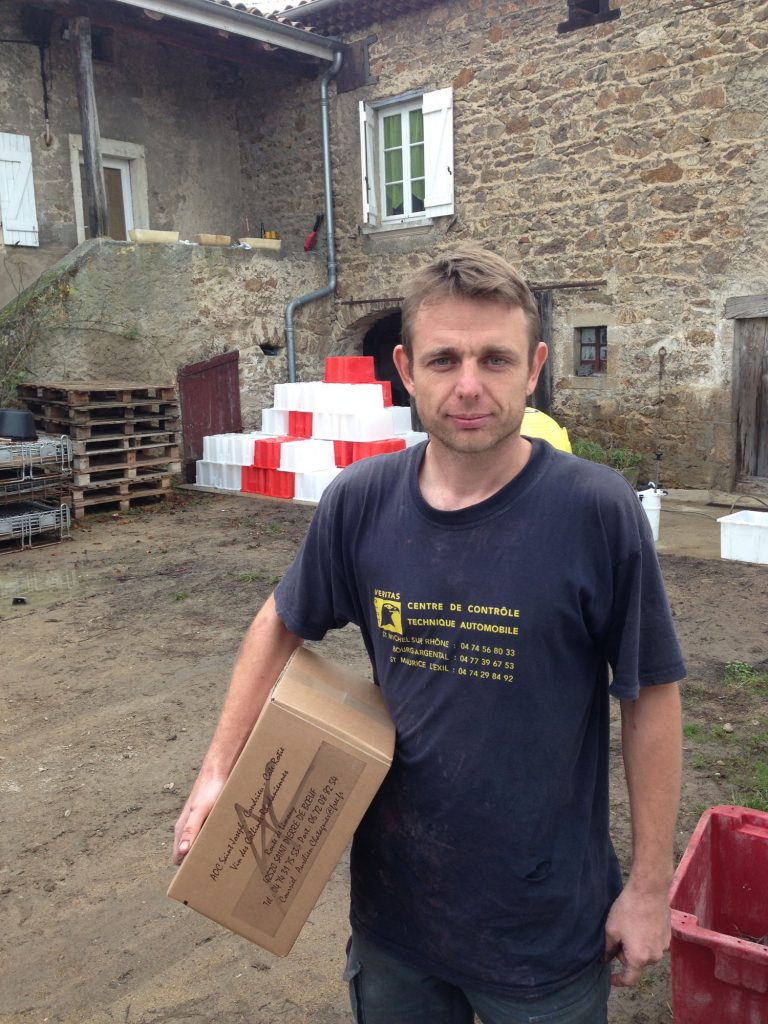 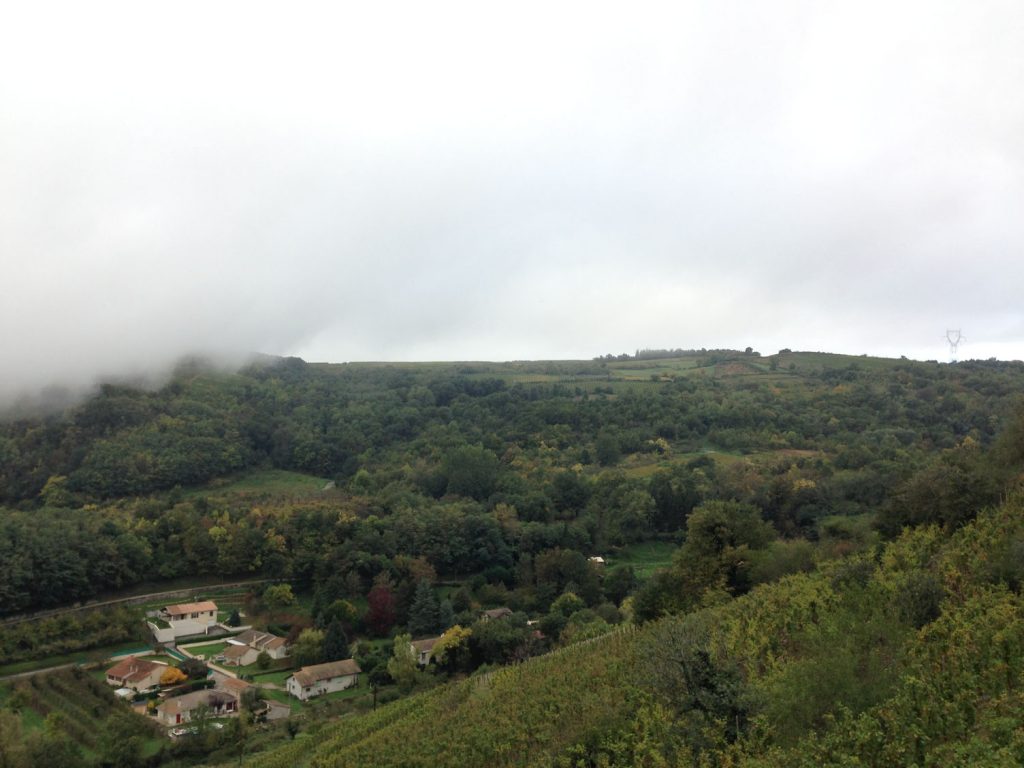 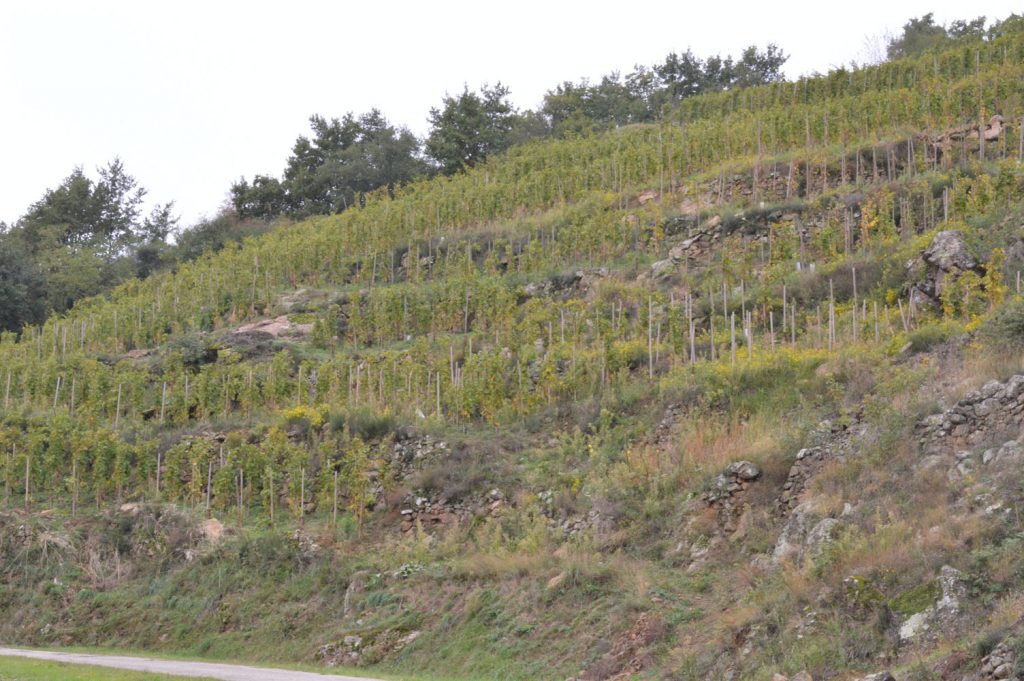 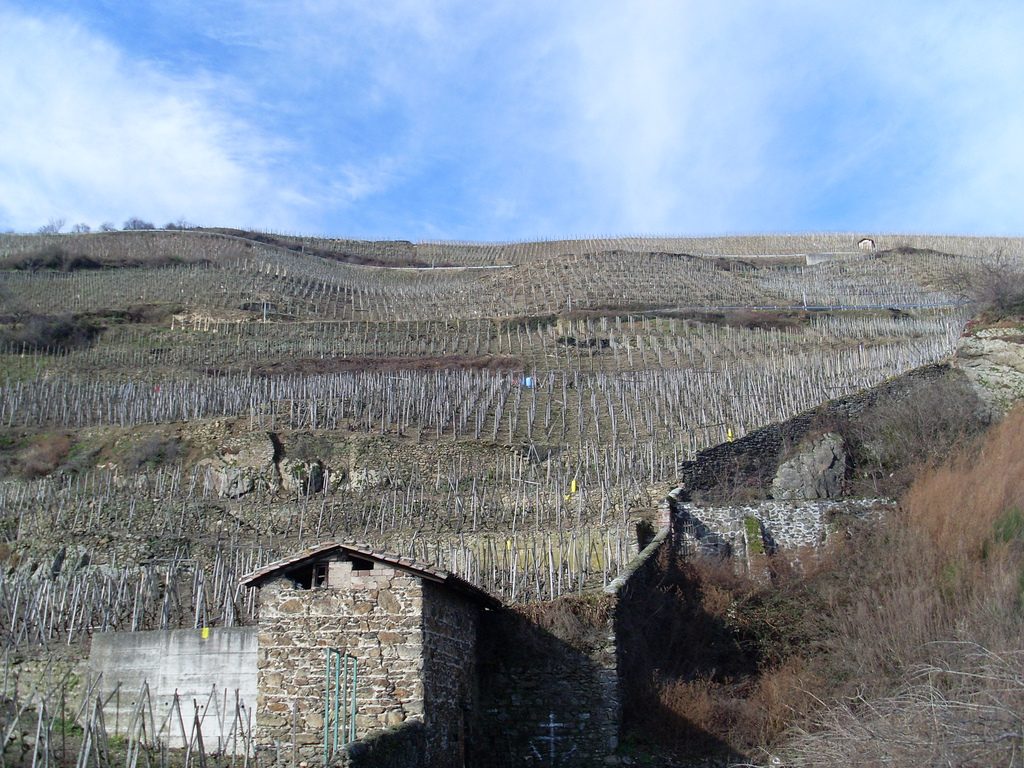 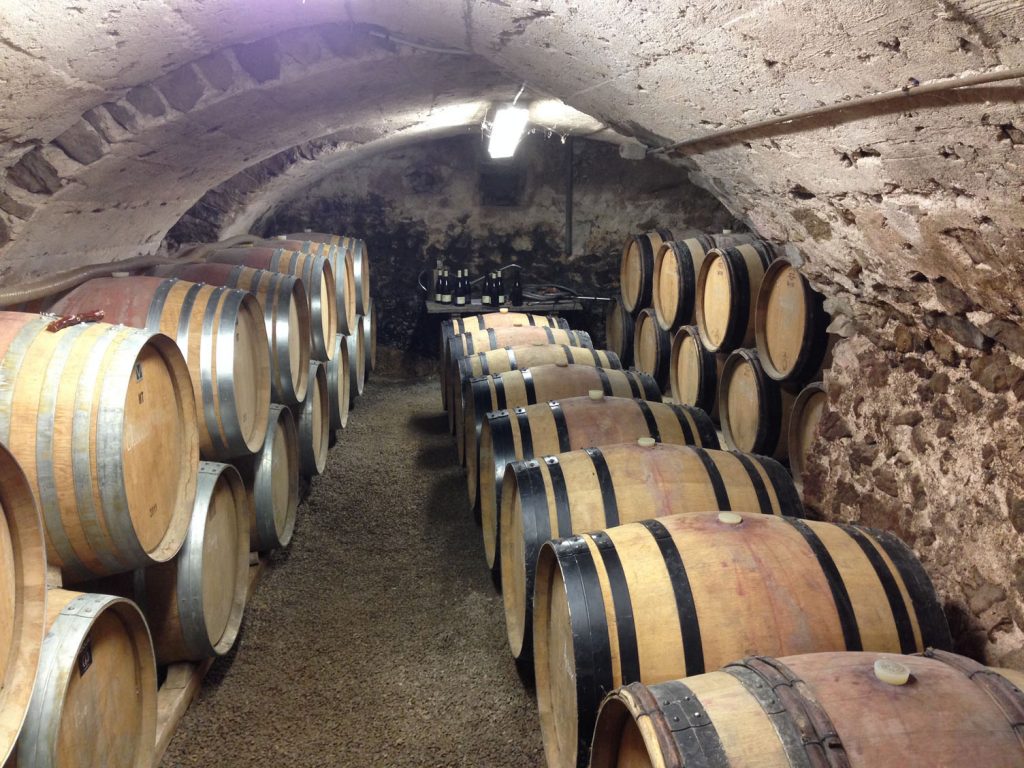 Organic. 100% Viognier. Assembly: 2 parcels located in the municipality of Limony. For one, facing south and granite soil with some clay (for richness). For the other, facing east and granitic soil (elegance and finesse). Vinification: Manual harvest, native yeast fermentation, temperature control fermentation between 15 to 20 ° C. Malolactic fermentation in barrels. Elevage of 8 to 9 months in barrels, 10% new. Approx annual production: 300 cs produced.

Organic. 100% Syrah. Sourced from a single vineyard in the appellation called Sauman, owned by a good friend of Aurelien’s, with whom he swaps Condrieu fruit for fruit from this site. .23ha planted in the 1990s. 00% destemmed. Natural yeast fermentation in fiberglass tanks, three pumpovers per day. 12-15 months in barrel (⅓ new).

Organic. 100% Syrah. Sourced from three parcels in above the village of Ampuis in the Cote Brune- Brocarde, Bonniviere, and Cote Rosier. Together they make only 0.2 ha. Schist soils with very steep slopes. 100% Destemmed, natural yeast fermentation in fiberglass tanks, 3 pump overs per day, then maceration a chaud (30-32ºC). Malo in barrel and aged in both new and used barriques. Annual production: approx 85 cs

Organic. 100% Gamay. From a lieu dit “Les Rotisses” on granite soils on a gentle plateau, the vines are average 30 years in age at 350 meters above sea level. Hand-harvested and destemmed. 4-5 days semi-carbonic maceration before press and goes through spontaneous fermentation. Aged 9 months in tank and bottled unfiltered. Approx. annual production: 200 cs.

Organic. 100% Syrah. A ‘Sybarite’ is a someone who is self-indulgent in their search for sensuous luxury. Chatagnier’s Sybarite is a blend of Syrah from 4 communes: Ardoix, Charnas, Malleval, and Limony, all hailing from granite soils and south-southeastern exposure. 3.5ha, all in Saint-Joseph, planted in the 1990s. The top wine at Chatagnier’s domaine.

Organic. Crêt Louison is a lieu dit located entirely within the AOC of St. Joseph. This single vineyard wine was planted in 2007, and while Aurélien considers it to be one of his best terroirs, it was never classified AOC Saint-Joseph because the owner had not planted vines there and was unable to request the appellation later. The DNA of the wine, however, is pure St. Joseph. The parcel is only 0.23 ha that sits on granite soils. Hand-harvested, destemmed, and fermented with native yeast. Very gentle punchdowns to limit extraction. Ageing in neutral oak for 12-15 months. Bottled without fining/filtering. Approx annual production: 100 cs