Growing up in Agrigento on Sicily’s southern coast, Filippo Mangione had winemaking in his blood. For generations his family tended vines and made wine in their palmento until his grandfather passed away in the sixties. The vineyards and building were sold off; leaving his family without an estate. After university, he dove headfirst into the world of wine: working as a waiter, sommelier, journalist, and sales/export in both the US and the UK. The more he worked selling other peoples’ wines, the more he felt the pull to revive his family’s legacy and re-establish an estate of his own. In 2011, after months of visiting and walking the slopes of Etna, Filippo happened to meet the old owner of a nearly abandoned vineyard in Calderara Sottana planted in the early 1900s behind a grove of chesnut trees. Too old to work the vineyards any longer, he was thrilled that Filippo wanted to continue his work, telling him “Take it. Don’t let this vineyard die.” Filippo spent his life savings to buy that vineyard and Ayunta was born.

The vineyards of Ayunta, now several parcels spread throughout the top terroirs (namely the contrada of Calderara Sottana) around Randazzo on northern Etna, total 2.8 ha. The vineyards are populated mainly by very old vines. Every vine is different which is why Filippo does all his farming either by hand or small machine. He doesn’t use any chemicals in his vineyards, preferring to allow the natural vitality of the soil shine through in the wines. Yields are quite low: in a very good year he may get 40 hl/ha. Due to the altitude, 600-700+ meters, the harvest is late with the whites in early October and the reds in late October. The vines are planted mainly to Nerello Mascalese but interspersed throughout those vines are Nerello Cappuccio, Carricante and Cataratto, as well as nearly extinct varieties such as Minnella Bianca and Minnella Nera. To make a white wine here is a Herculean effort. Vines of the white grapes are stray among the reds, and, as such, he has map out and track the development of many individual vines to pick at optimal ripeness early in the morning. The soil here is “ripiddu”, the local name for lapillus (a small black volcanic rock) and ash. Etna, a very active volcano, gives new soil during every eruption, a very rare occurrence that defines the unique minerality of Etna wines.

In the cellar, Filippo makes the wines very traditionally. The reds ferment spontaneously in an open-top concrete vat for about 3 weeks before pressing to mainly neutral barrels of larger sizes. The whites also ferment spontaneously but stainless steel is used for fermentation and ageing. No additives of any kind touch the wines during the elevage.

"My winemaking philosophy is very easy: only grapes, only time and a small amount of sulfites. No other additives." -Filippo Mangione 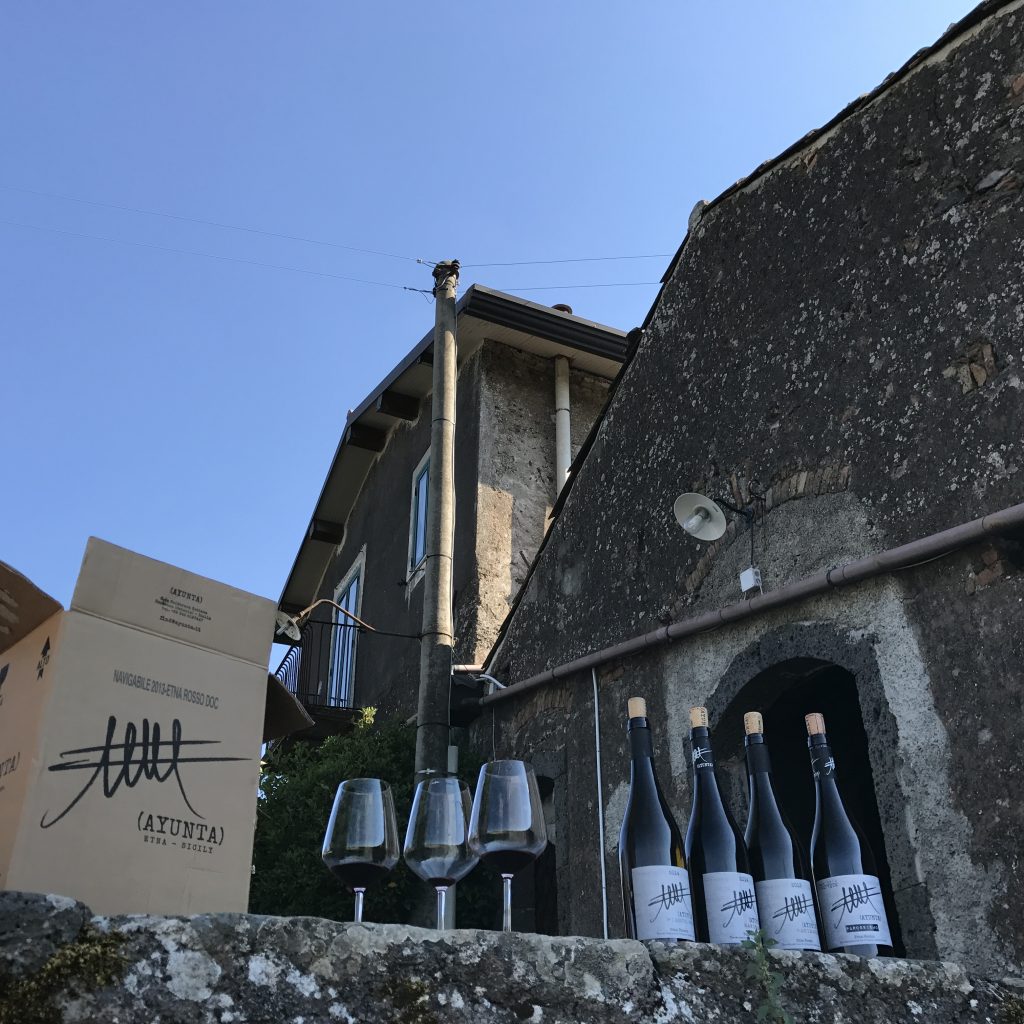 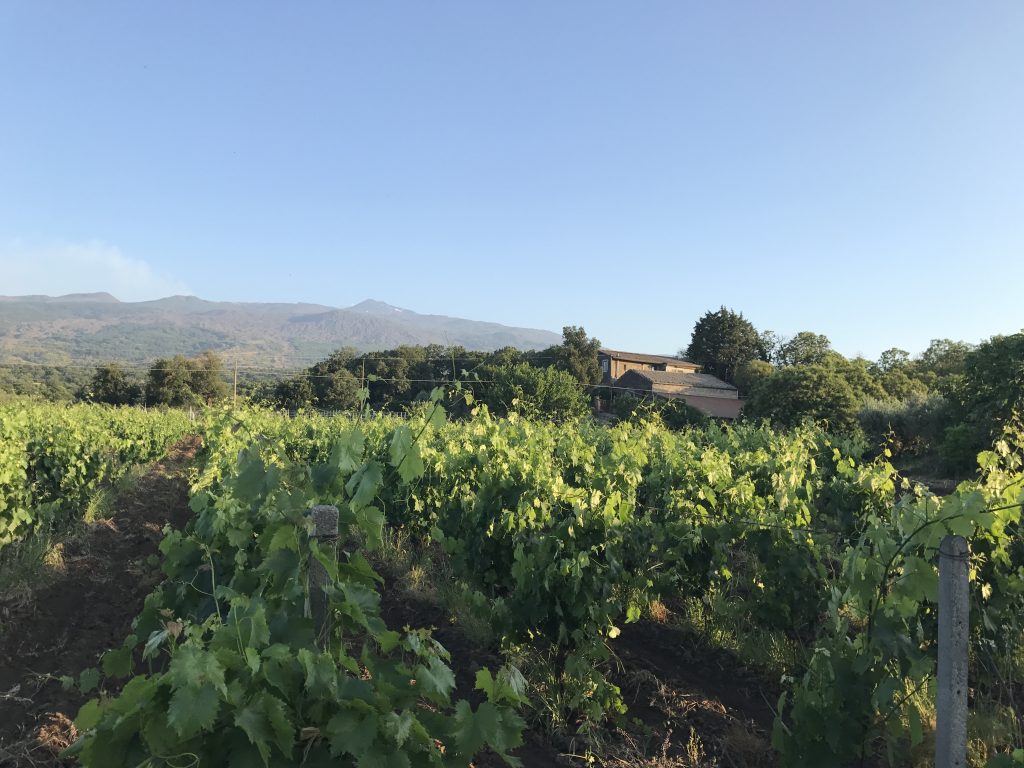 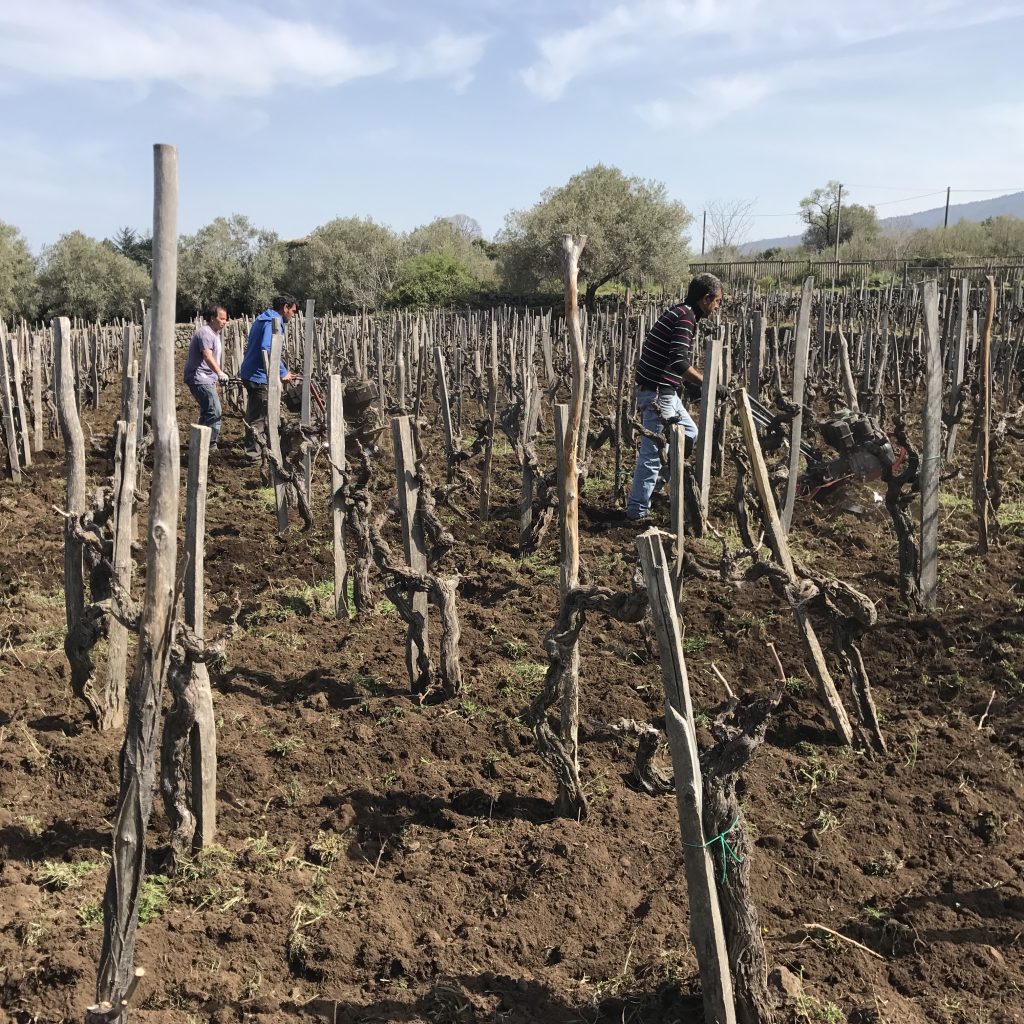 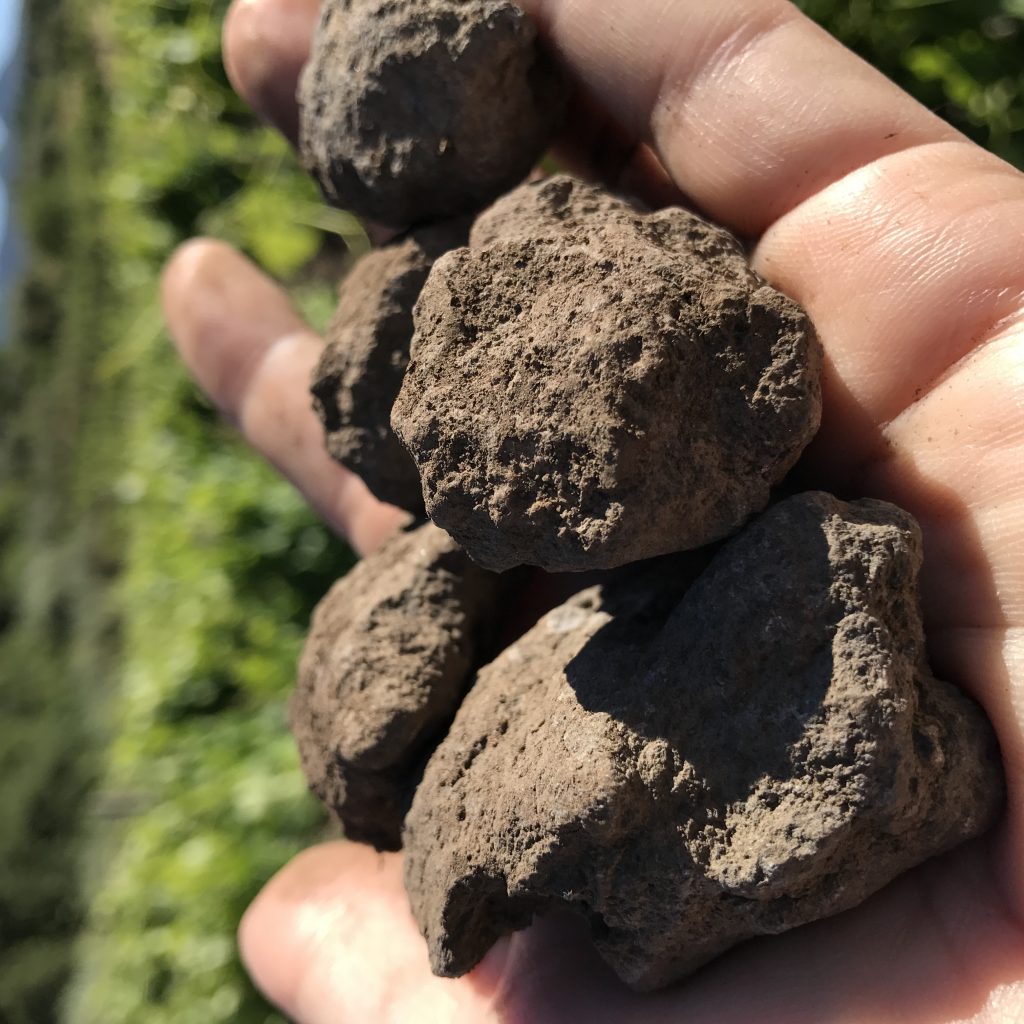 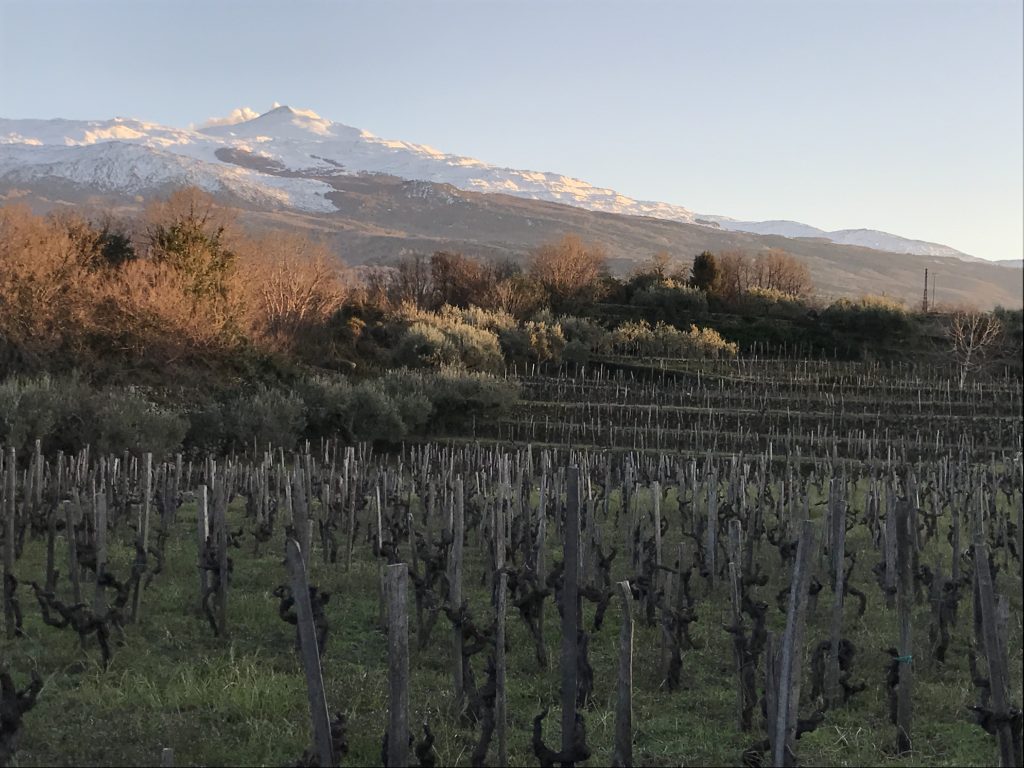 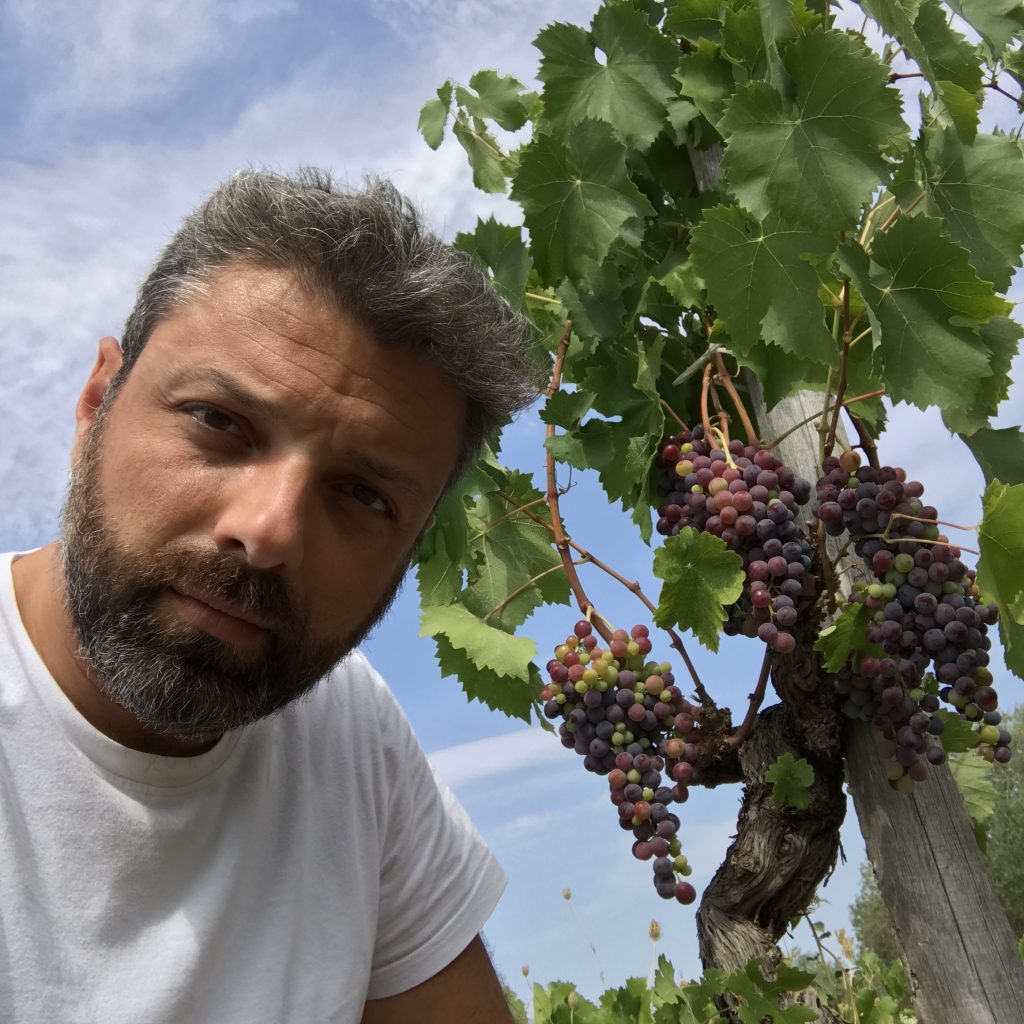 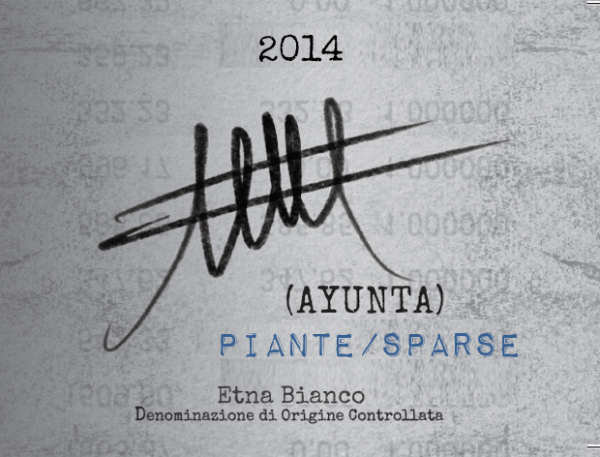 Organic. 90 % Carricante, 10% Catarratto and other indigenous varieties. Soil- volcanic. Altitude- 650 m average. Sourced from vineyards on the north slopes of Etna in and around Randazzo. . In Italian “PIANTE / SPARSE” literally means “stray-vines” . Ayunta doesn’t own a whole vineyards of white grapes, but in their old vineyards of red grapes there were traditionally planted some vines of white grapes. Over the years Ayunta has mapped these grapes and now farms them to be their own harvest. However, coordination ripening across this mixed back of vines is very difficult, so it is only produced in the best vintages when the grapes ripen just right. Hand-harvested, pressed, and spontaneously fermented in stainless steel. Aged in stainless steel on the lees before bottling. 330 cs produced. 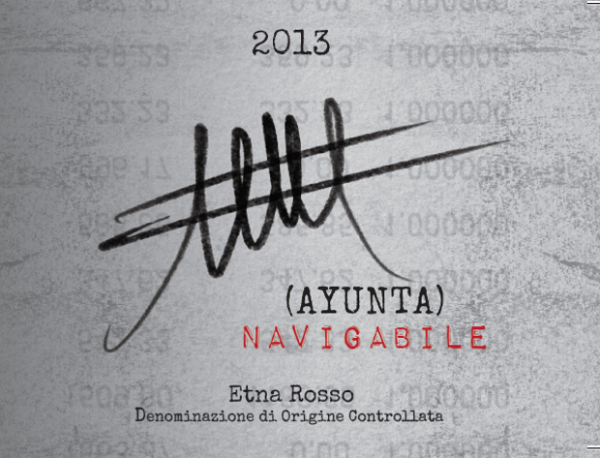 Organic. 90% nerello mascalese, 10% nerello cappuccio. Volcanic soils. Altitude- 650 m on average. Sourced from the northern slopes of Etna around the town of Randazzo. Open top fermentation with ambient yeast and macerated for 18 days. The wine is then aged in 5 to 10 hectoliter barrels, a mix of cherry and oak for 14 months before bottling. 330 cs produced. 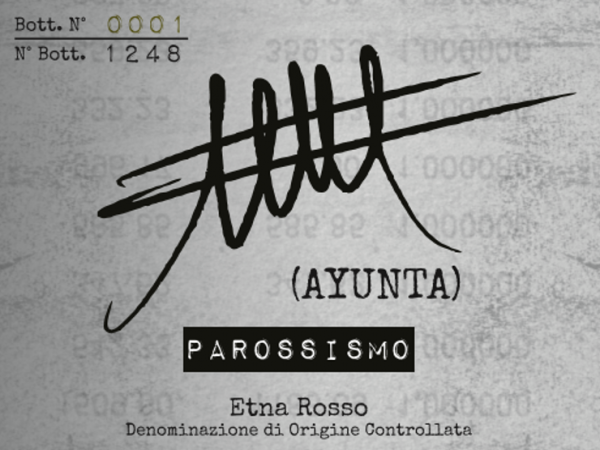 Organic. 100% Nerello Mascalese. Sourced entirely from the contrada of Calderara Sottana from vines over 60 years old. The soil here is very stony and composed of chunks of light weight, black volcanic pumice that hold the sun’s heat. 650 m altitude. All work in the vineyards is done by hand.
Traditional fermentation with wild yeasts in small wood open vat. and maceration is done for 21 days. Aged in netural 500 and 225 liter french barrels for no less than 24 months. 104 Cases Produced. PAROSSISMO (paros’sizmo), has two meanings :1) an outburst of a particular emotion, 2) the most violent eruption of the volcano. 125 cs produced. 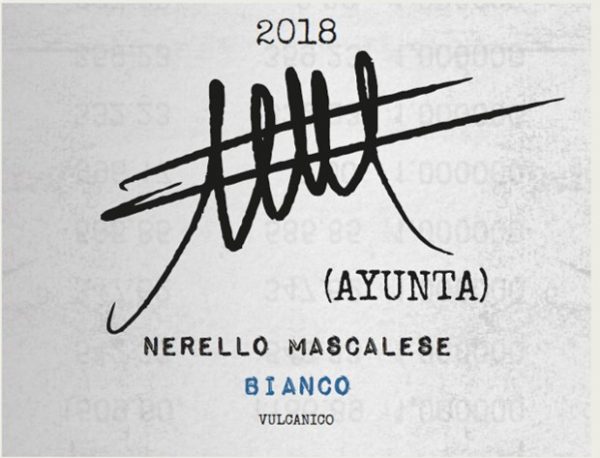 Organic. 100% Nerello Mascalese. Very unusual still white from Nerello Mascalese – to honor the local tradition to make white as a base for metodo classico wines. The vines are 50-100 year-old on Etna’s volcanic soils. Soft pressing followed by spontaneous fermentation in stainless steel and aged in cement tank for 7 months. 500 cs produced. 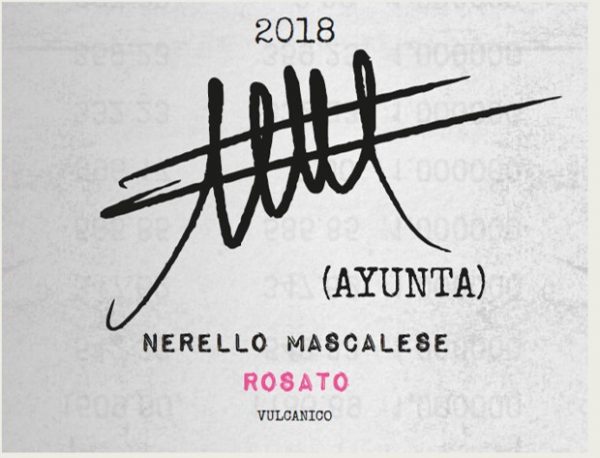 Organic. 100% Nerello Mascalese. Inspired by Provencal rose, fresh and briny Nerello Mascalese rose from Sicily. The vines are 50-100 year-old on Etna’s volcanic soils. Soft and gentle pressing in order to not extract too much coloring (no maceration), followed by spontaneous fermentation in stainless steel and aged in cement for 7 months. 500 cs produced 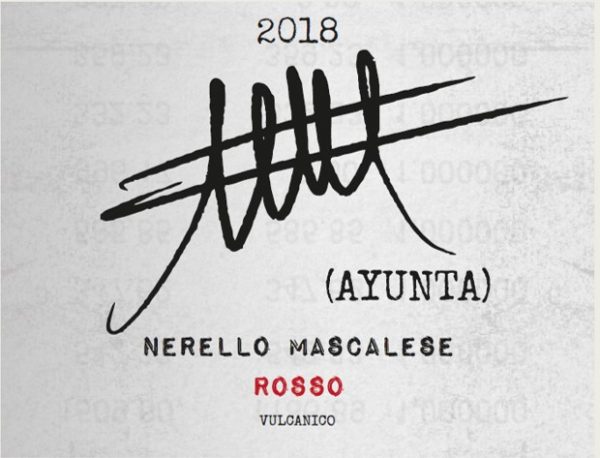 Organic. 100% Nerello Mascalese. Traditional yet easy-going style of red wine, that is once known and called “pista e’mmutta” (Meaning: press it and put in the barrel straight away). Gentl pressing with short marbonic maceration followed by fermentation in a cement vat. Aging in bottles. 500 cs produced