For anyone who is a fan of traditionally made Barolo, Brezza should be on the short list of classic producers. First started in 1885 and still family owned and operated, they’re a bastion of the old-school, graceful style that make no compromises with their adherence to the methods and philosophies of an older era. Today, Brezza is run by 4th generation owner and winemaker Enzo Brezza. Enzo’s first vintage was in 1989, and the quality of the estate has soared under his steady hand. This should come as little surprise given his training under his father Oreste and the influence of his uncle and godfather Bartolo Mascarello. While Enzo has remained unwavering in his commitment to a traditional style of winemaking, he has by no means been complacent with pushing the estate in terms of viticulture. Barolo has not always been at the forefront of organic viticulture, yet Enzo converted all their vineyards into being fully certified organic as of 2015 (conversion began in 2010). Composting, cover crops, and using small tractors are just some of the steps they’ve used to improve their vineyards’ health. In the cellar they’ve adopted spontaneous fermentations in the cellar for majority of their wines. They age their Barolo strictly in large cask, give the wines ample time during elevage, and bottle without filtering or clarification.

“Brezza remains one of Piedmont’s great undiscovered gems. The estate’s Barolos, made in a rigorously traditional style, show tons of vintage and vineyard character in the classic, mid-weight style that is the signature of traditionally- made Barolos.” –Antonio Galloni 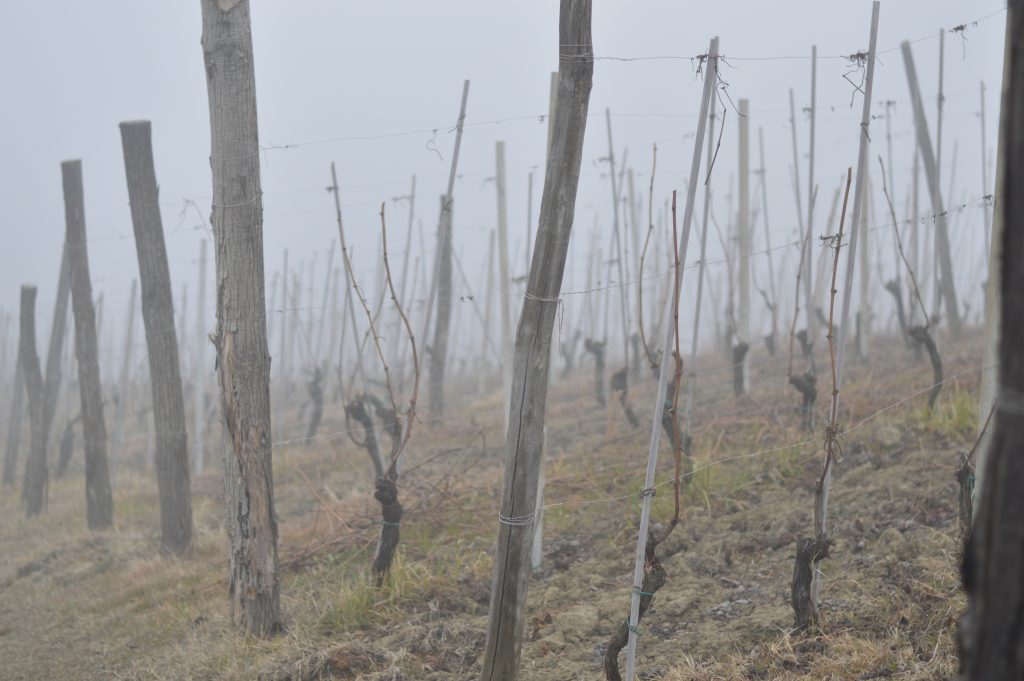 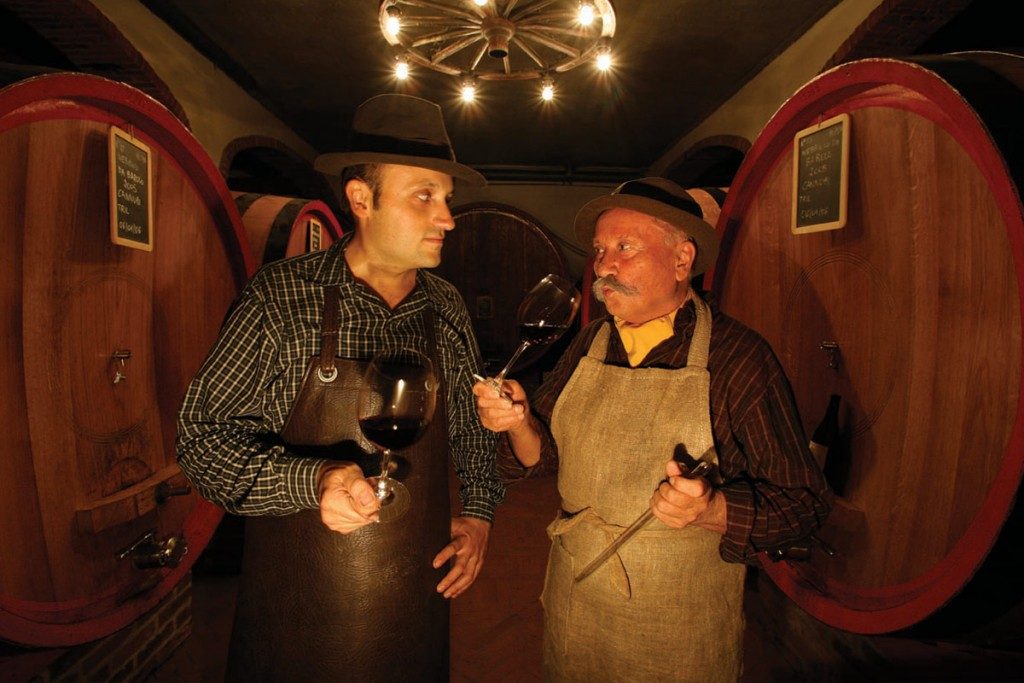 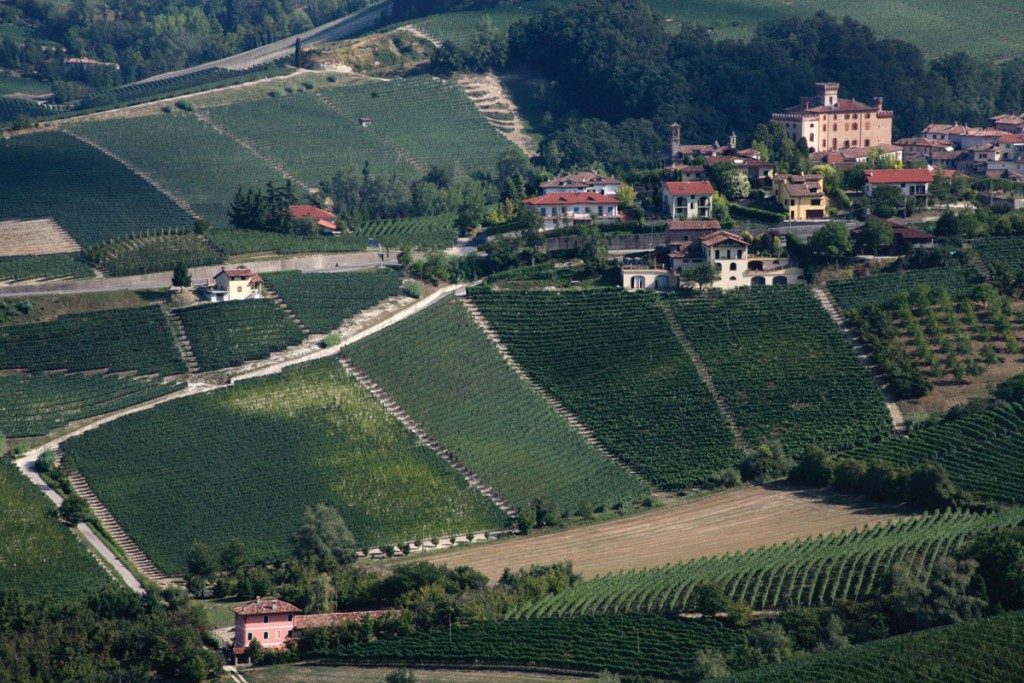 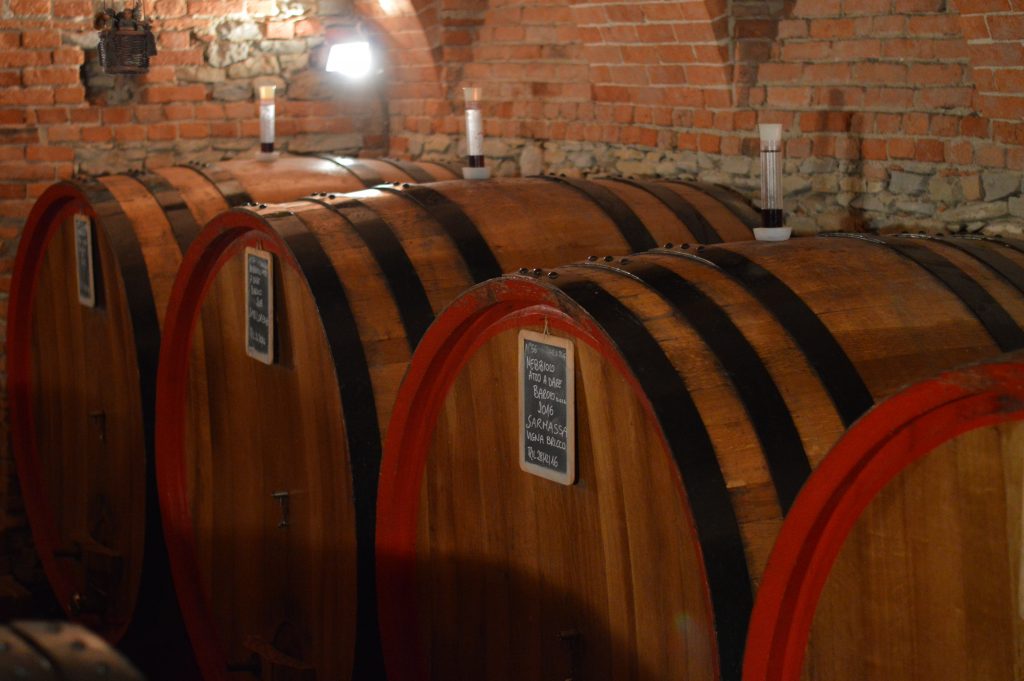 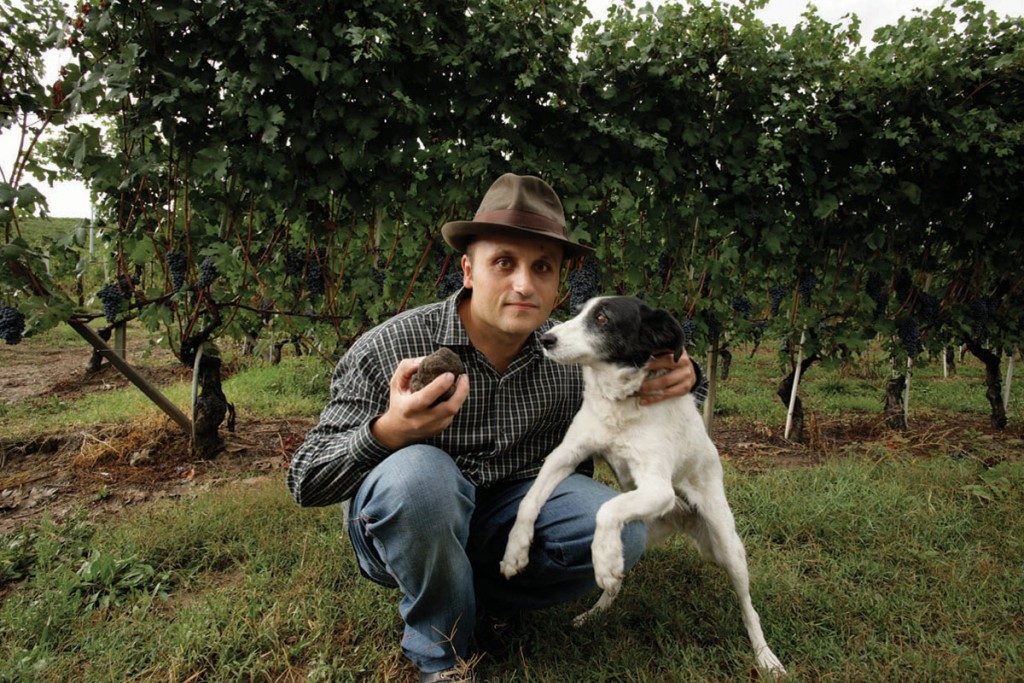 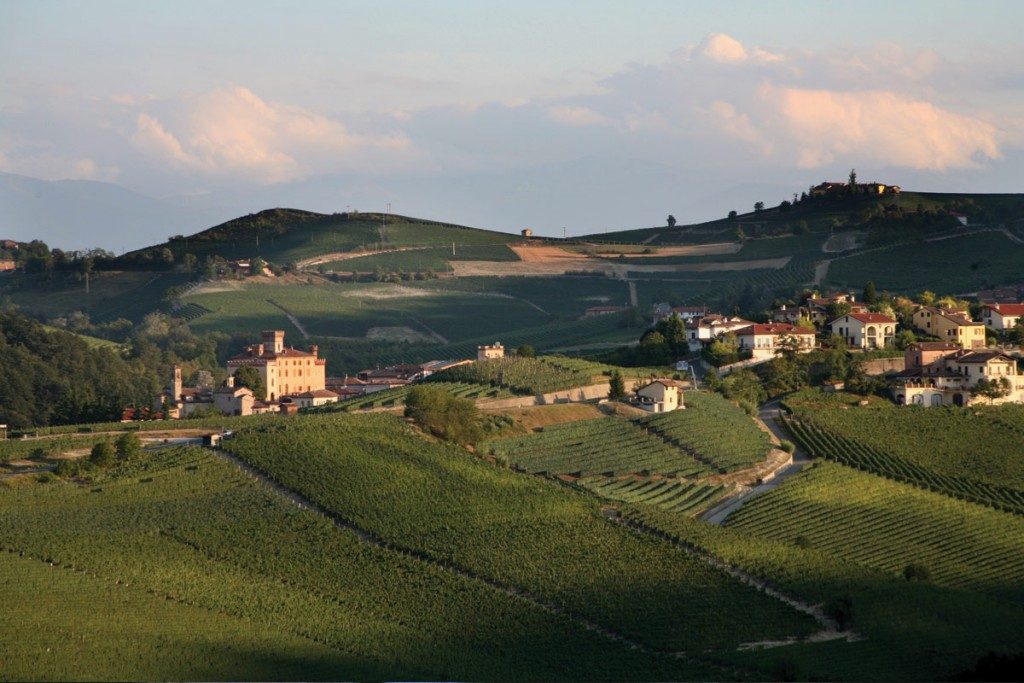 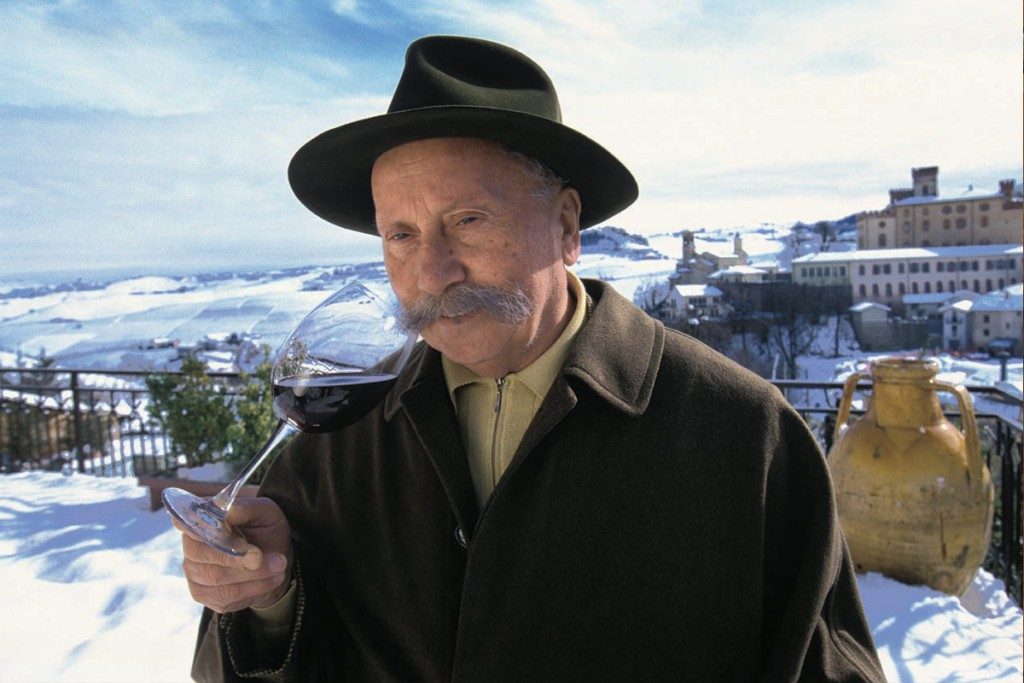 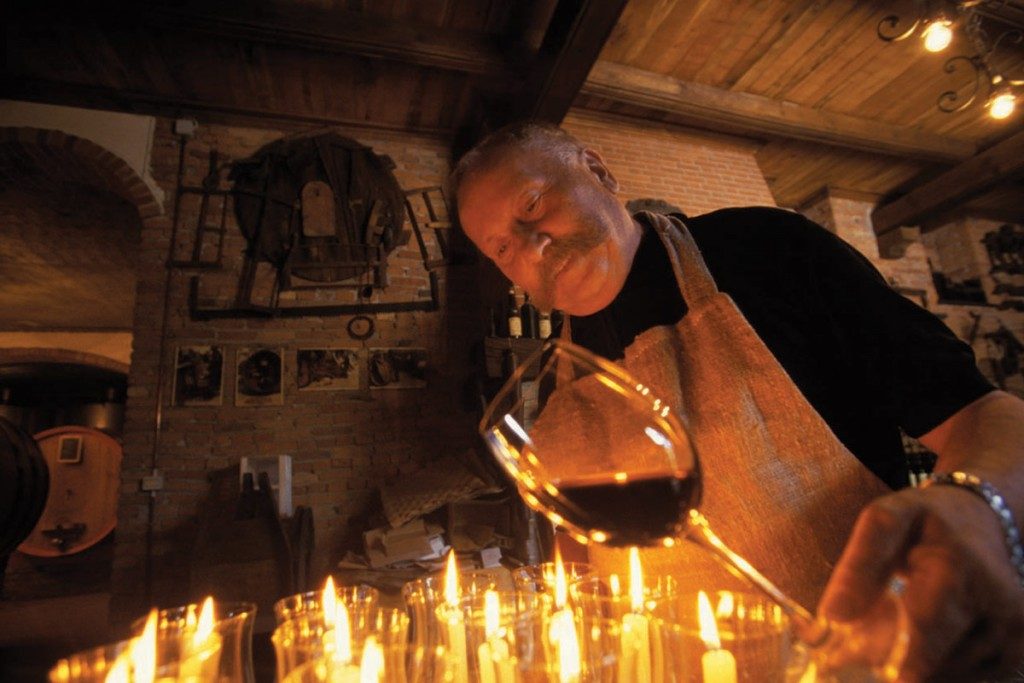 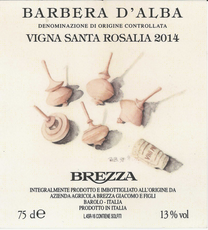 Certified Organic. Planted in 1952, Sant Rosalia is located on the border of Alba and Diano d’Alba. Vines are traditionals Guyot trellising with western exposure. Fermented and aged entirely in stainless steel, the wine is much more floral and elegant compared to Brezza’s superior barbera. This wine is always bottled under glass stopper. 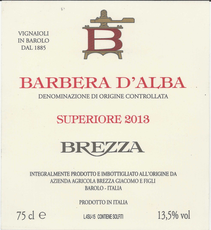 Certified Organic. This wine shows what Barbera is capable of. Only made in the best vintages and sourced entirely from a plot in Cannubi-Moscatel. Most producers would have grafted these vines to Nebbilo in order to sell the wines as Barolo for three times the price. With south-east exposer and sand-loam soils the wine has great depth. The grapes are destemmed and fermentation is typically 8 to 10 days. Maceration continues another 4-6 days depending on the vintage. Once malo is finished, the wine wines are aged in 1-3 year old Slavonian oak botte for 12 months. Wine spend another year in bottle before release. 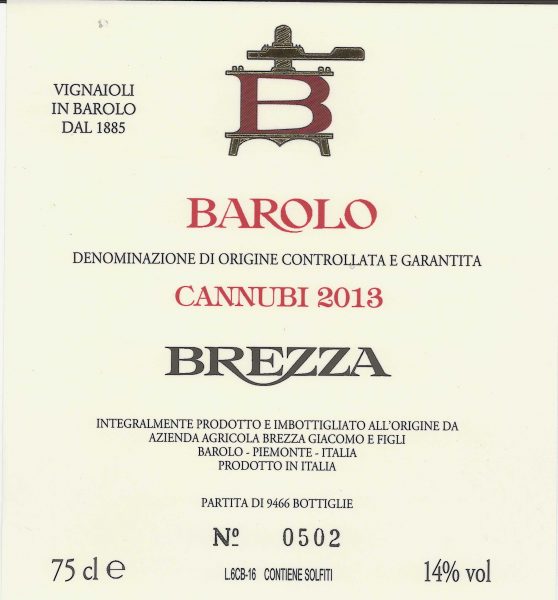 Certified Organic. The earliest mentions of Cannubi on a wine label in 1752, be a site recognize for its potential for over 250 years. Brezza’s portion (1.5 ha) lies in the original area of Cannubi and sits about at 250 meters with all South-East exposure. Soils are sand and clay. Vines planted in 1994 and 2001. Grapes are hand harvested and transported in small bins. Fermentation lasts for 7-8 days and maceration continues for another 30 days. During this time the cap is submerged and pump over is done several times a day. Malolactic takes place in cement vat before the wine ages two years in 30 hl Slavonian oak casks. The wine is transferred back to concrete for another 8 months and undergoes several rackings to allow bottling without fining or filtration. The wine ages another year in bottle before and is numbered before release. 9466 bottles produced (2013 vtg). 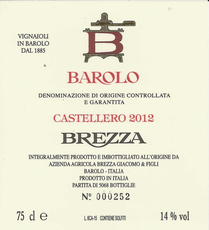 Certified Organic. Planted in 1970 this vineyard is characterized by the Diano sandstone. Sandier than even their plot in Cannubi, the wine is well-structured when young and has lifted aromatics. Castellero sits at the very top of a hill at 270 m and faces southwest. Fermentation lasts for 7-8 days and maceration continues for another 30 days. During this time the cap is submerged and pump over is done several times a day. Malolactic takes place in cement vat before the wine ages two years in 30 hl Slavonian oak casks. The wine is transferred back to concrete for another 8 months and undergoes several rackings to allow bottling without fining or filtration. The wine ages another year in bottle before and is numbered before release. 5,066 bottles produced (2013 vtg). 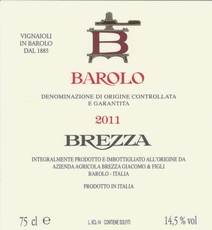 Certified Organic. The grapes for Brezza’s Classico are sourced from three communes: Barolo, Monforte d’Alba, and Novello, showcasing a cross section of the south-west portion of Barolo. Average vine age is 25 years old. Like their Cru Barolos, the grapes are hand harvest and transported in small bins. Maceration is shorter, about three weeks instead of a month, but it is still aged for two years in Slavonian oak casts from 1500 to 3000 liters. Bottled unfined and unfiltered. Wine then spends another year in bottle before release. 12,000 bottles produced (2013 vtg). 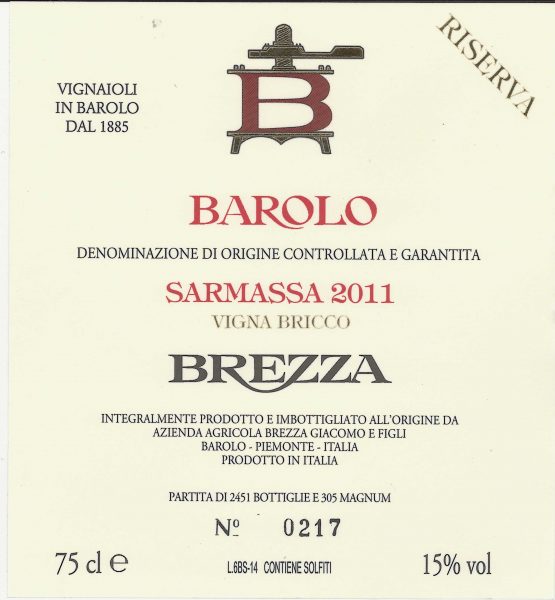 Organic. This is first time ever in the 130 year history of Brezza that they’ve decided to do a Riserva Barolo. Bricco Sarmassa is the very best parcel within the Sarmassa vineyard, located at the top of the hill where it receives the most sun. The Sarmassa vineyard, located in the commune of Barolo, has a southwestern exposure and a higher content of clay than Cannubi. The vines, planted in 1941, are Brezza’s oldest. This combination of afternoon sun, clay, and old vines creates Brezza’s most ageworthy wines. Historically Brezza released a Bricco Sarmassa bottling only in the very best vintages. However after the law changes in 2010 to promote the single vineyards of Barolo (Menzione Giografica Aggiuntiva or “MGA” Brezza was required to begin calling this wine Sarmassa “Vigna Bricco”. As this was already their top wine and so as to not create confusion by having two separate bottlings with Sarmassa in the name, Enzo opted to begin cellaring the Bricco for a longer period of time to be able to create a Riserva. The vinification was the same as with the regular cru Barolo bottlings: 3-4 weeks of fermentation on the skins with daily pumpovers followed by malo in concrete, 24 months ageing in large Slavonian casks, then returning the wine to concrete for another 8 months with several rackings to remove sediment so they can bottle unfined and unfiltered. The Riserva then spent an extra 18 months in bottle compared to the 2011 crus before its release in the summer of 2017. 2451 bottles and 305 magnums produced. 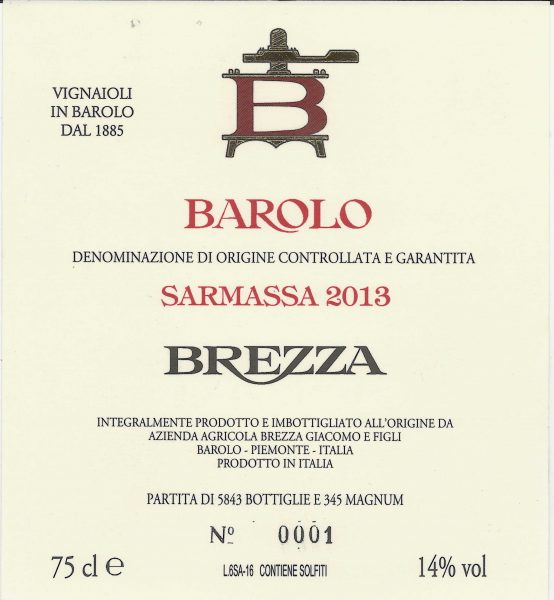 Certified Organic. In ancient times, this area was called Salmassa, a name that probably originates from a source of brackish water welling up in its vicinity. This is one of the smallest Crus in Barolo and Brezza only has one hectare, planted in 1941. The soil of this vineyard is typical to the town of Barolo, made mostly from Sant’agata fossil marne (clay and silt) The wines produced here are of greater quality in dry years. In fact, the higher percentage of clay and silt ensures a larger water retention. For example, the 2003 vintage, a vintage often seen as flabby and overblown for many producers is stunningly elegant from this vineyard. Grapes are hand harvested and transported in small bins. Fermentation lasts for 7-8 days and maceration continues for another 30 days. During this time the cap is submerged and pump over is done several times a day. Malolactic takes place in cement vat before the wine ages two years in 30 hl Slavonian oak casks. The wine is transferred back to concrete for another 8 months and undergoes several rackings to allow bottling without fining or filtration. The wine ages another year in bottle before and is numbered before release. 5843 bottles and 345 mags produced (2013 vtg). 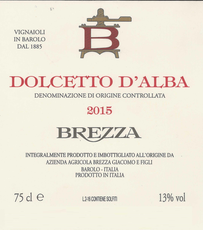 Certified Organic. Even more than Barbera, dolcetto tends to get planted in the worst spots in Barolo, giving preference to Nebbiolo for Barolo. However, this vineyard, planted in 1991 in Barolo is south-west facing allowing for good ripening and the very soft and sandy soils not only allow for great drainage but add more perfume and fruit to the wines. Grapes are destemmed and fermented on the skins for seven days before being transferred into concreate tank to age for 8 months. The wine is aged another 4-5 months in bottle before release. 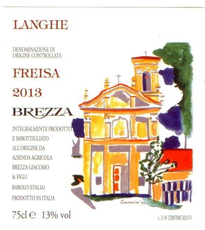 Certified Organic. Coming from 30+ year old vines in the Santa Rosalia vineyard in the commune of Alba, this Freisa is much more structured and concentrated than typical wines. Fermentation and maceration with the skins at 78°F for 6 days, all in cement. 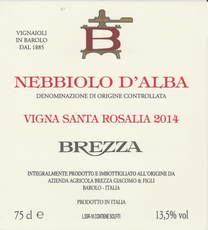 Certified Organic. Maceration lasts from 6 to 8 days. Sourced from the Santa Rosalia vineyard which sits between Alba and Diano d’Alba. 1.27 ha with clay/sand soils planted at 300 m. Hand-harvested and fermented in concrete. In December the wine is then moved into large Slovenian oak barrels to rest for one year. After about another year in bottle the perfumes and aromatics show and the wine is released. 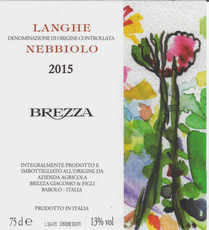 Certified Organic. This wine is made with freshness and elegance in mind. Maceration lasts from 6 to 8 days. Wine is done entirely in stainless steel and bottled in the spring. 25+ year old vines on western facing slopes all located in the commune of Barolo.