Since 1838, Gutierrez Colosia has been situated in the mouth of the river Guadalete in the town of El Puerto de Santa Maria.  The quality of the Gutiérrez Colosía wines is guaranteed by careful ageing through a process known as “criaderas y soleras”, following the region’s tradition. The Gutiérrez Colosía wines are produced in “bodegas”, or wine cellars, with an architectural style known as “Nave Cathedral” or cathedral like warehouse. These are buildings of significant height and numerous arcs which allow for a better exposure of the wines to the influence of the special climate of the Region. The Gutiérrez Colosía Bodegas are heirs to a long viticulture and wine producing tradition. Their first Bodega was built in 1838 and it has been preserved almost as such to this day. After different ownership, it was acquired by Mr. José Gutiérrez Dosal in the 1920s, the late great grandfather of this last generation of the Gutiérrez Colosía family. In 1969, the Gutiérrez Colosía family bought the ruins of the Palace of the Count of Cumbrehermosa -Cargador de Indias, which also included a wine cellar. Upon these ruins two additional cellars were built. In 1997, Gutierrez Colosia made the transition from almacenista to bottling their own sherries.

“In Sanlucar they talk about being close to the sea, but nobody is closer to the sea than we are.” - Juan Carlos Gutierrez 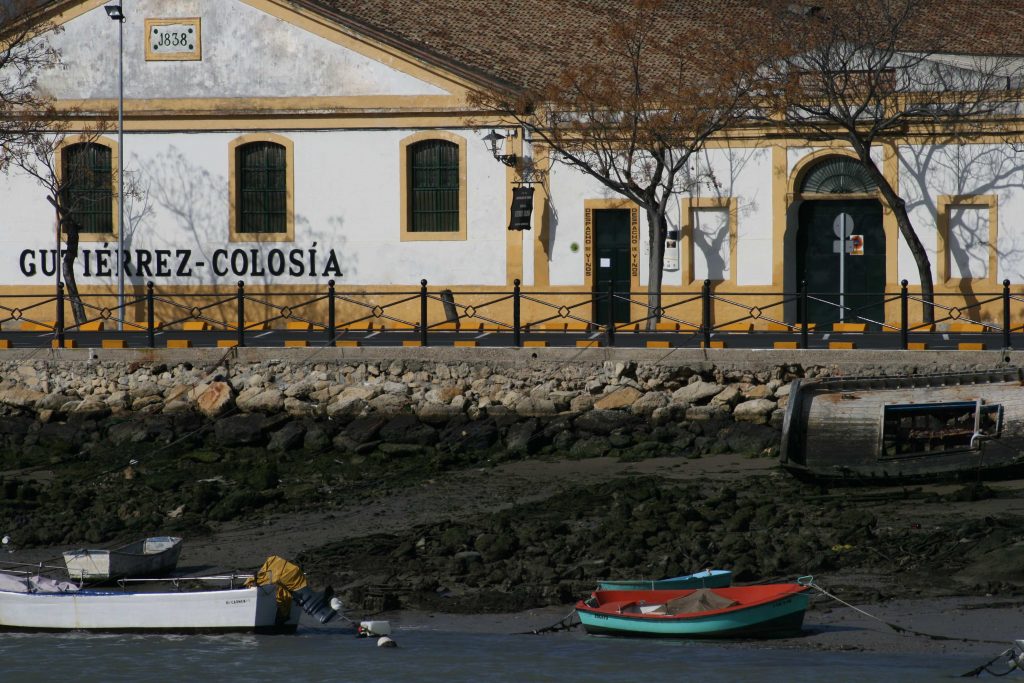 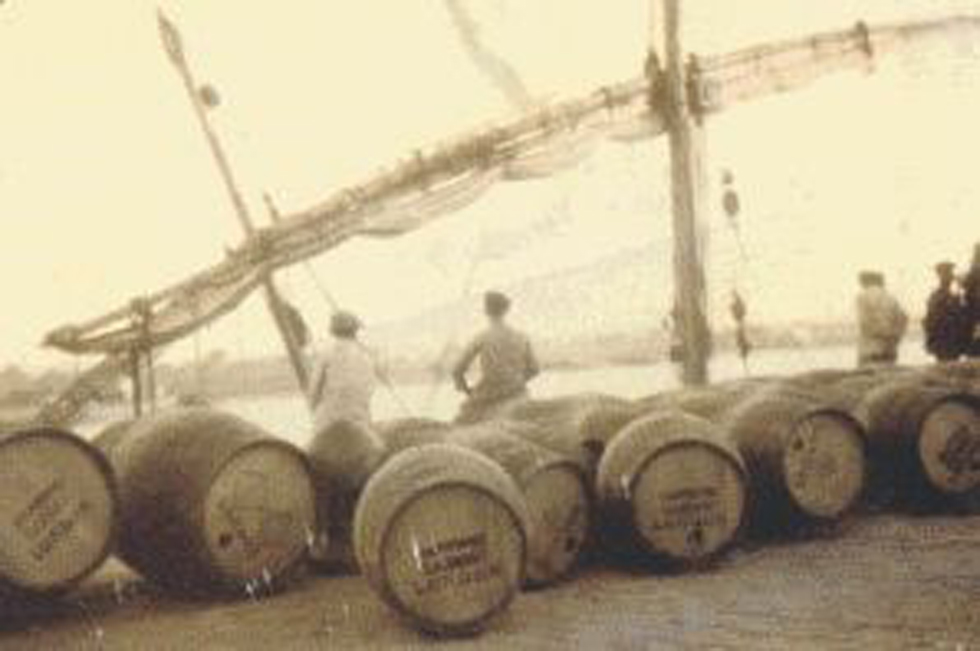 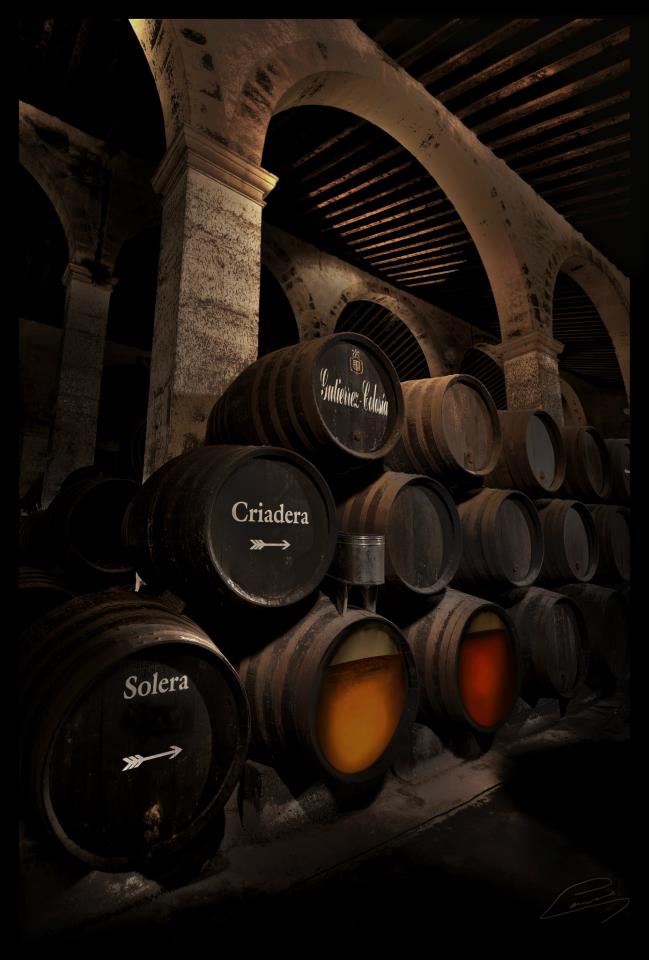 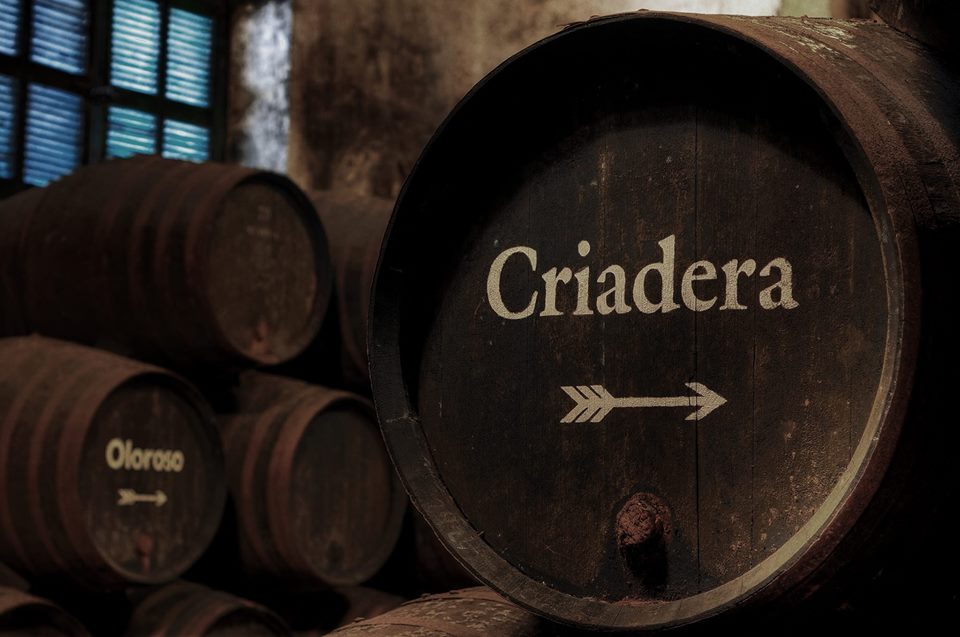 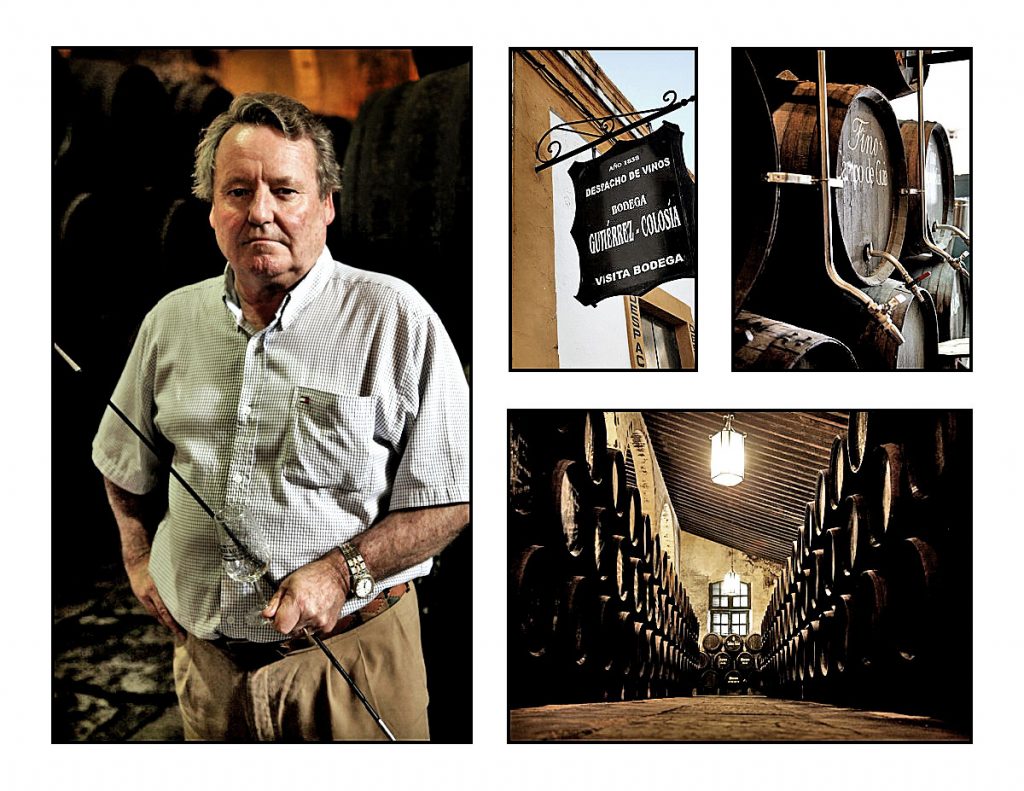 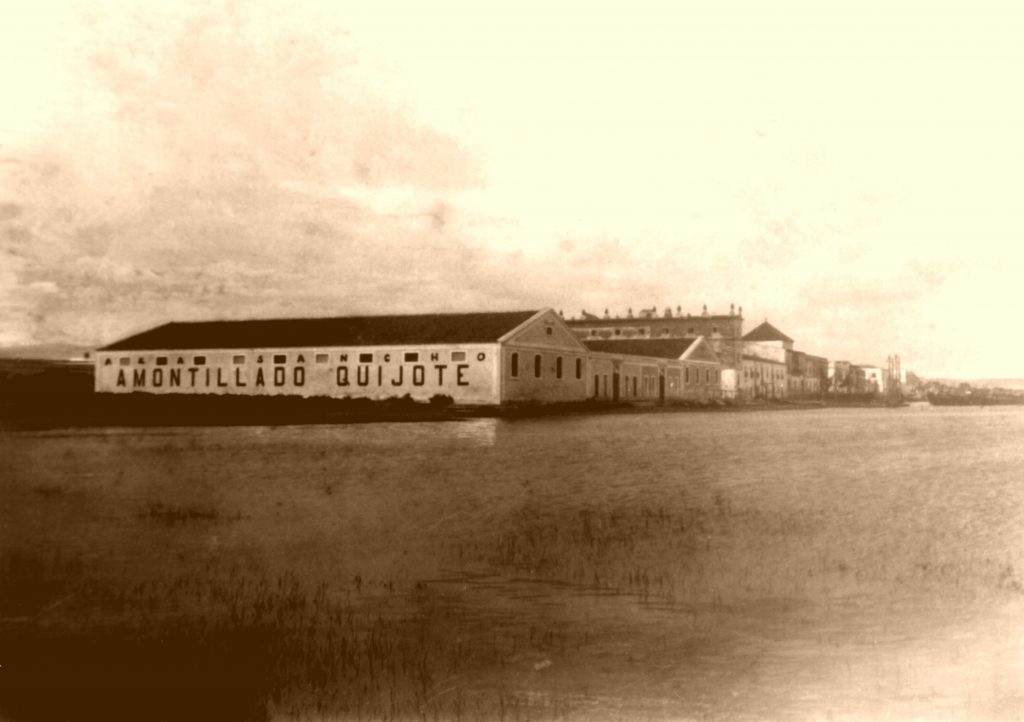 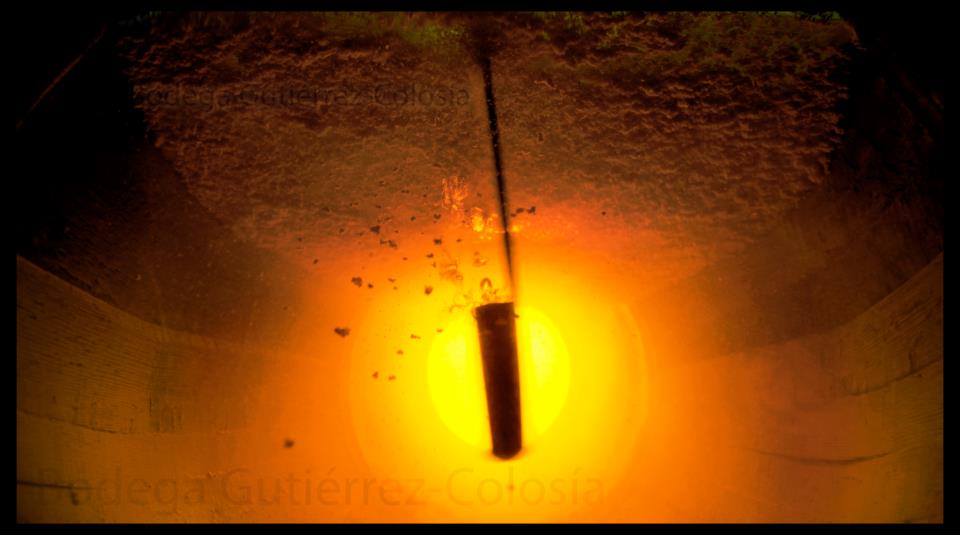 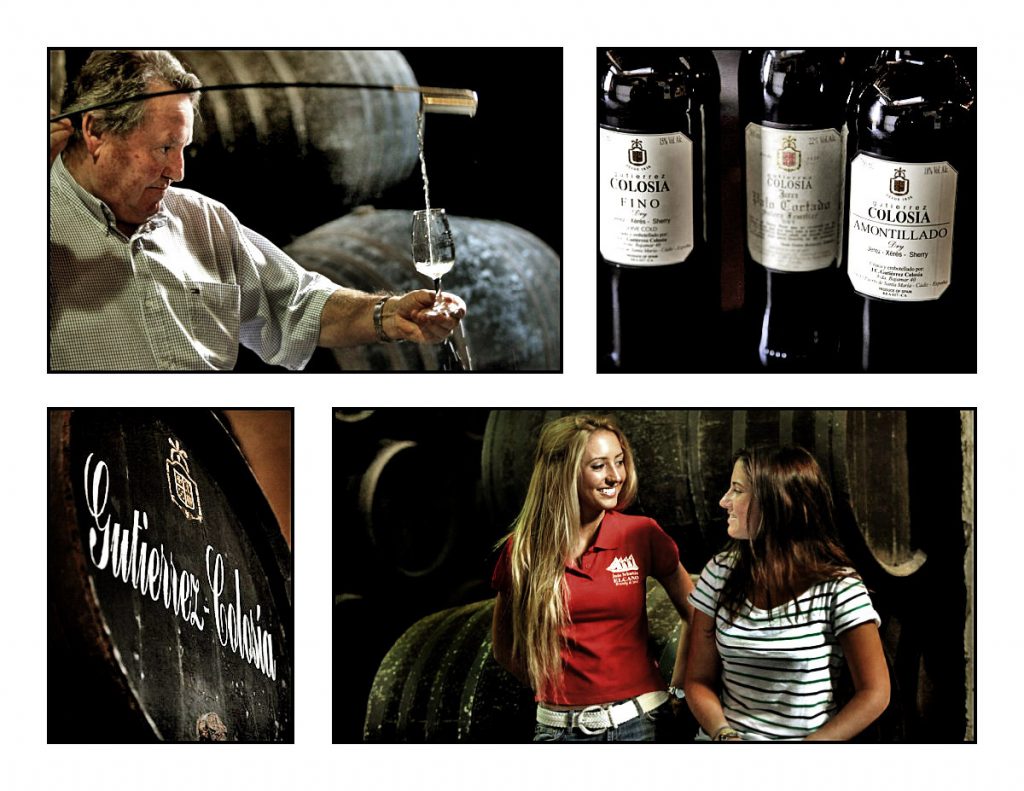 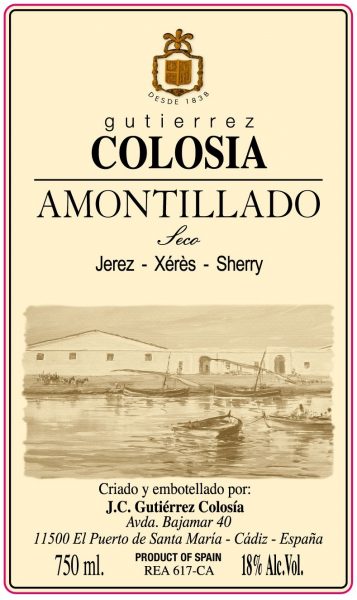 This is an old wine that has the particularity of having both aging processes (biological and oxidative). Aged for at least 8-9 years in solera (it spends three years as a Fino before losing its flor and then undergoes oxidation process for at least five years) 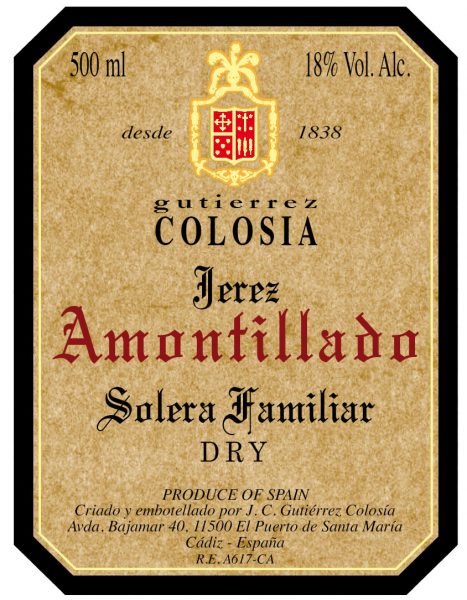 The Solera Familiars are Gutierrez Colosia’s version of a VORS. It comes from the oldest soleras at GC and is bottled in extremely small quantities each year. “the Amontillado, averaging over 50 years, possesses even more complexity, with a tense, racy structure and a striking intensity of flavor.”- Peter Liem 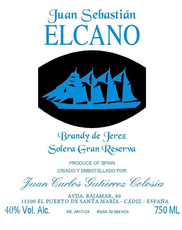 The average age here is well over 50 years, and possibly even older, but Juan Carlos isn’t too concerned with knowing the exact age. Suffice to say it’s really really old. The reason- during the lead up to the Spanish Civil War in 1936, soldiers looted this already existing solera and smashed most of the barrels. What was not destroyed was consolidated into a smaller solera where it was forgotten about for nearly 70 years. The “angel’s share” took quite a bit during this time, but what was left is truly one of the world’s most special brandies. This is what makes up the backbone of the ElCano. Only tiny amounts are bottled each year in order to keep the age and quality as high as it is. For anyone who is a serious spirits connoisseur, this is more than worth the price. 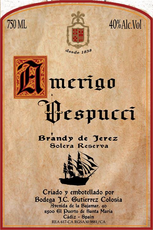 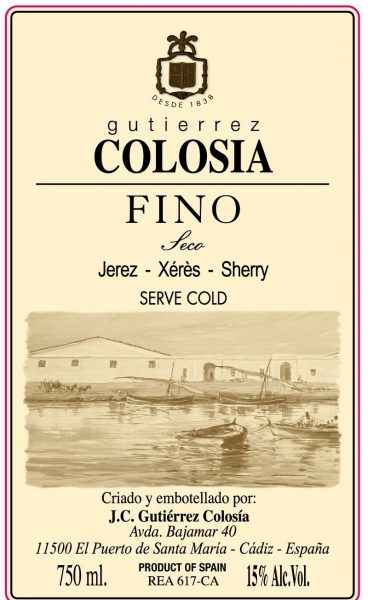 Owing to their bodega’s unique location directly on the Guadelete River, blocks from the ocean, in the town of El Puerto de Santa Maria, Gutierrez Colosia has extremely active flor year-round and a very pronounced saline character throughout their wines. The Fino is aged for a minimum of 3 years under the flor and is bottled to order by the estate, thus preserving freshness. 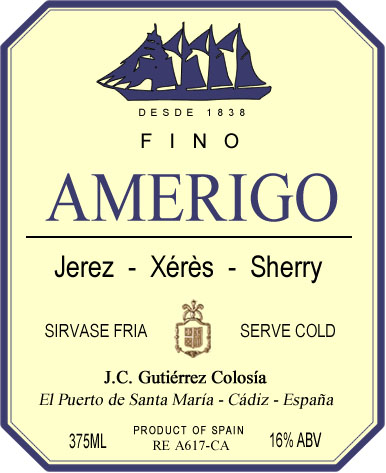 Aged under flor for 5 years with an alcohol level of 16%, the Fino Amerigo is a unique Sherry. Normally flor cannot survive above 15% alcohol, but Juan Carlos has painstakingly nurtured these few barrels where the flor endures at such a level. The extended time under flor adds considerable complexity. Very small quantities bottled yearly. 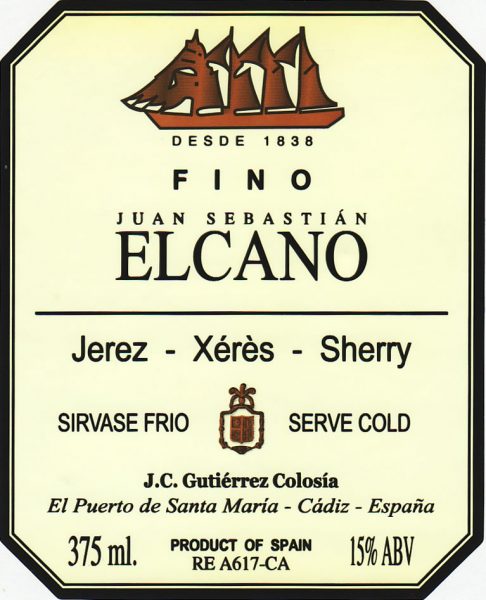 100% Palomino. Colosia’s En Rama Fino is a wine of stunning purity and beauty. They bottle only tiny quantities and only right before shipping. This ensures the purest and freshest Fino possible. Over the years, Juan Carlos has identified several butts within their Fino solera that produce particularly complex Finos. It is from these special casks that the En Rama comes from. On average the Fino En Rama is 3-4 years old. Every aspect of the En Rama is done by hand and literally nothing is added to the wine once it’s pulled from cask. Zero filtration (many other En Ramas are still passed through 1 micron filters). 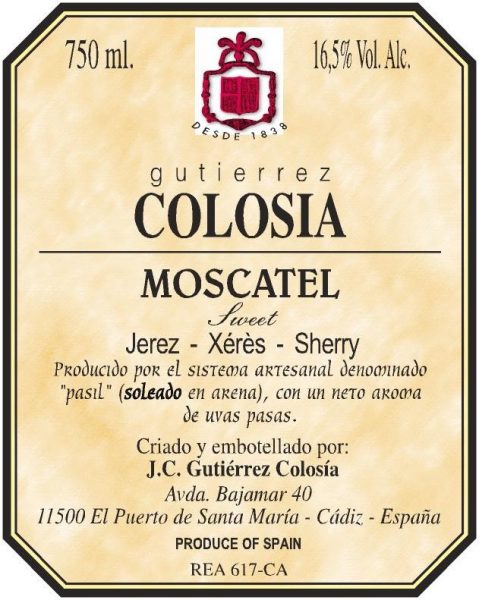 Made from sunned Moscatel grapes through the traditional system called ‘pasil’ (sunned on sand). High acidity lends balance to this sweet wine. Aged an average of 4 years in solera. Peter Liem on the Moscatel, “ honeyed and concentrated in aroma, it complements its opulence with a wonderful tension and clarity of flavor, finishing with excellent harmony and length.” 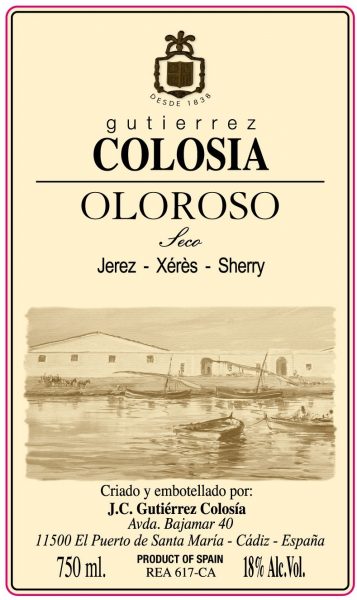 Aged for at least 8-9 years in solera, all of which are done without the presence of flor. Peter Liem on the Oloroso, “ a full-bodied yet sleekly shaped wine…Despite being aged without flor, it still shows a taut, linear structure reflecting its seaside origins, along with the petrol-like fragrance typical of El Puerto wines.” 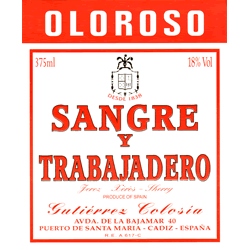 One of Sherry’s most iconic wines. Aged for an average of 12 years in the solera. The Sangre y Trabajadero solera began in the town of Jerez in the 1800s as the solera of a cooper whose trabajadero, a cooper’s yard where butts are constructed, was located on Calle Sangre, the street where the butchers were located. Named after this location, the oloroso was a favorite of the butchers and other Jerezanos alike. The solera was first sold to Bodega Lacave in Cadiz before being sold to Bodega Cuvillo in Puerto. After Cuvillo went bankrupt in 1982, Gutierrez Colosia purchased the solera. To this day, new ships built in the bay of Cadiz are ceremonially launched not with a bottle of Champagne, but with a bottle of Sangre y Trabajadero.

100% Palomino. Colosia’s Solera Familiar Oloroso averages a minimum of 35 years of age.  The Solera Familiar sherries represent the very oldest, and most limited, sherries produced by Gutierrez Colosia.  Only a few hundred bottles are bottled yearly to maintain the integrity of these soleras, which have existed continually since the mid 1800s.  “Dense notes of caramel and spice” – Peter Liem

The Solera Familiar is Gutierrez Colosia’s version of a VORS. It comes from the oldest soleras at GC and is bottled in extremely small quantities each year. From a solera so old Juan Carlos Gutierrez doesn’t know the exact year it began. It’s a minimum of over 50 years old and quite likely more than 60 years old. Peter Liem on the Palo Cortado Solera Familiar “potentially Gutierrez’s finest wine: demanding in its concentration and grip, it shows a flor-derived complexity under its pronounced notes of oxidative aging, finishing with long, incisive aromas”

The richest, most concentrated of their sweet sherries. Made from the partially fermented must of sun-dried Pedro Ximénez grapes. Aged an average of 4 years in solera. Peter Liem on the PX, “vibrant and suave under its dense flavors.” 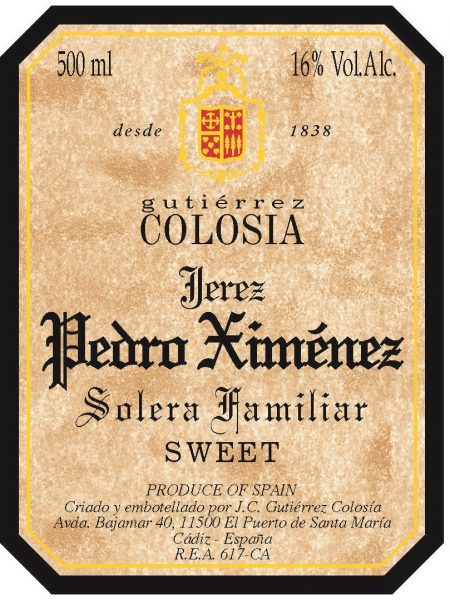 This is a PX that Juan Carlos’ grandfather found when he purchased the bodega 100 year ago. It had already been there for years however Gutierrez Colosia never commercially sold any until the mid-200s. In order to maintain the integrity of this ancient solera they draw at most 900 bottles per year. The average age, while somewhat of a mystery, is at least over 80 years old on average and likely over 100 years.