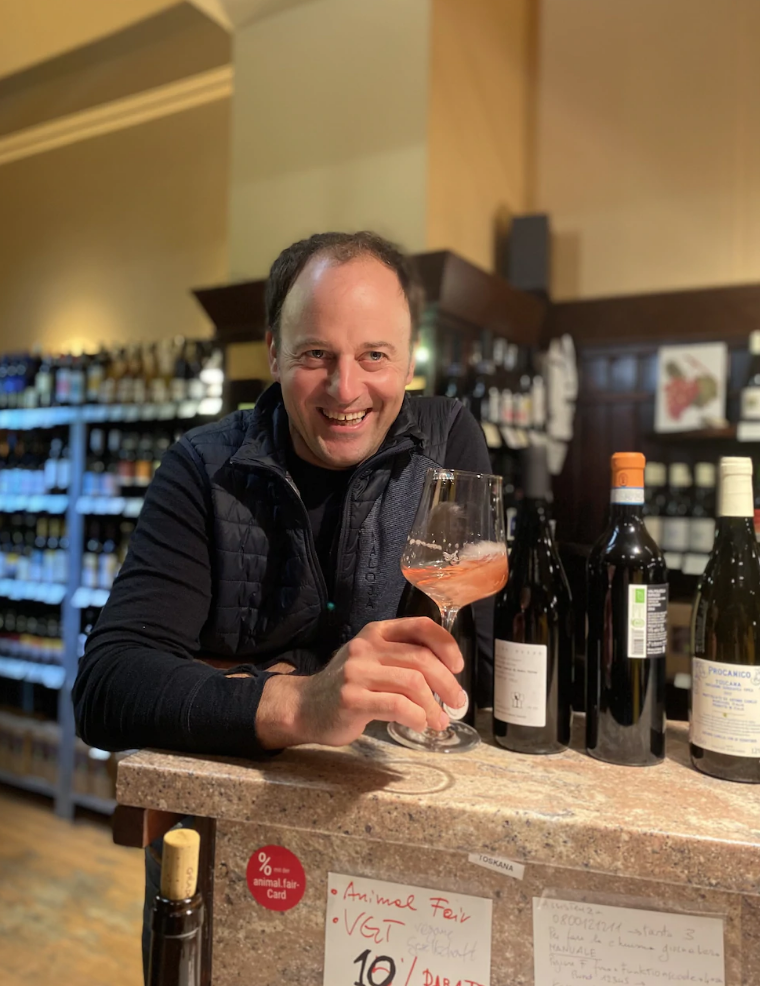 Josef Totter was born on a farm in Vulkenland, Styria, a wine appellation inside the Steiermark with a particular character: famed for vineyards atop the hillsides of extinct volcanoes; situated between the hot, dry Pannonian climate to the north and east, and the humid, warm Ilyrian Mediterranean climate to the south. Totter was raised here with viticulture—his family owned a bit of vineyard, made wine, and had a Buschenschank, the traditional family-owned wine taverns common in the Steiermark. But in truth, it was time in Italy that flipped a switch for Totter’s vision of farming and making wine. 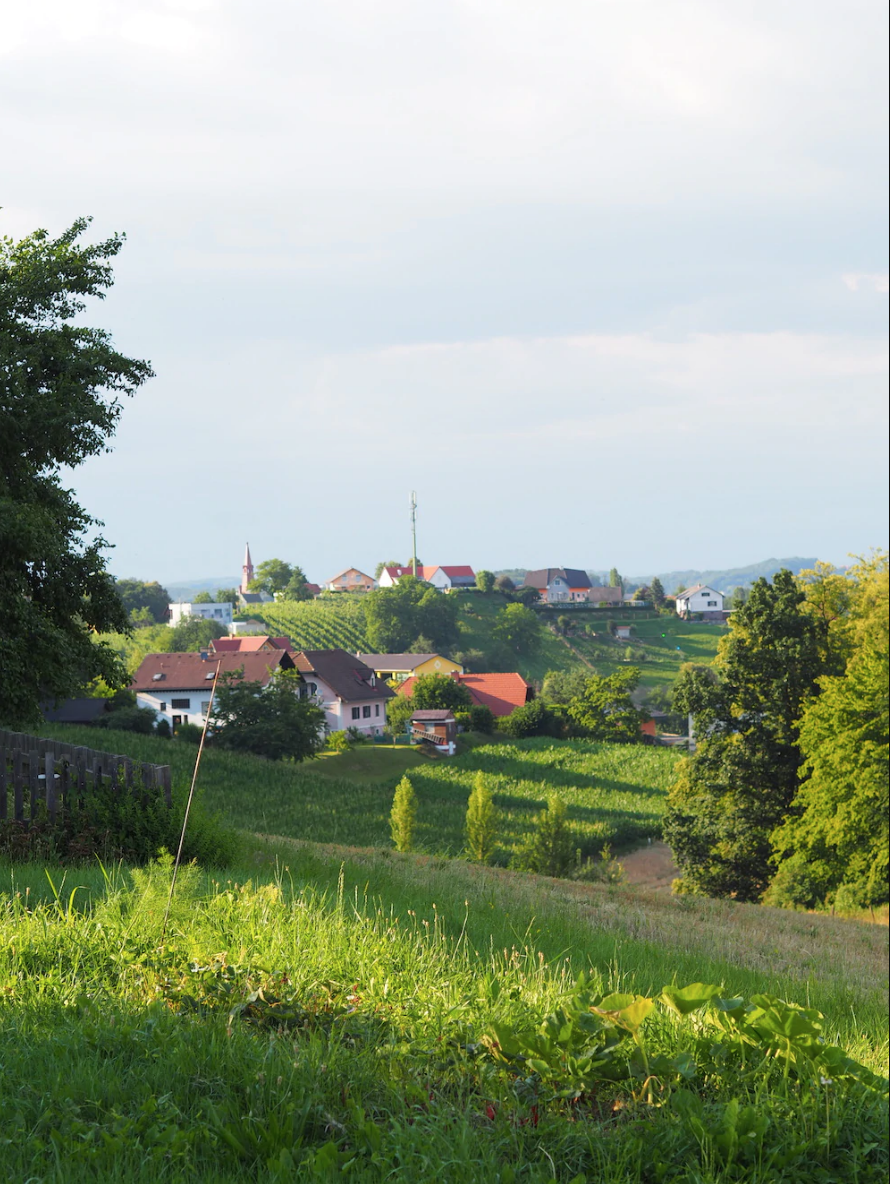 Totter studied at viticultural school as a teenager and graduated to master’s work in engineering after; he went on to design motorcycle engines for the well-known Austrian company KTM. A following stint of years at Betamotor in Florence meant Josef was splitting his time between Vulkanland and Italy, producing his own wine at home in the meantime—but conventionally, per his student learning. Over Totter’s five years in Italy, he was put more and more in contact with natural wine—he counts among his personal friends Gianfranco Soldera—and, as he puts it, “it was then I found my love in wine.”

In 2011, Totter and his wife Helga arrived at some difficult decisions: return home permanently and do something real with the family farm: the pigs, woods, vines, the orchards? Or abandon winemaking altogether, stay in Italy, and keep the engineering work for moto companies? In 2012, the decision to the Totters became clear: change their lives, move home, make natural wine.

On the Jägerberg, the particular village from which Totter hails, there’s a big diurnal shift between day and night, as well as a huge swing in temperatures between the seasons (95° F in summer and 5° F in winter). In this area, rainfall is 36 inches per year; there’s a lot of fungus pressure, perenospera in particular. It meant, when Josef was making wine with the previously existing varieties—Müller-Thurgau, Welschriesling, and Zweigelt—he was extensively treating with copper, sulfur, and more to combat mildew and fungus. He says he grew sick of this, wanting to make wine “without being addicted to industry,” a situation of reliance on chemicals and heavy metals that increasingly disturbed him.

A series of conversations with a few progressive farmer friends led Totter in that pivotal year to rip up his family’s old, struggling vines and replant with something completely new: two PiWi varieties, which are different from the standard hybrids the world currently knows best. These newer varieties are made by crossing vinifera with the more common hybrids, leading to the end genetic material being around 75-80% vinifera. The two varieties Totter put down, on his family’s original 2ha of vineyard plots, are Muscaris (Muskateller x Solaris) and Souvignier Gris (Cabernet Sauvignon x Bronner). 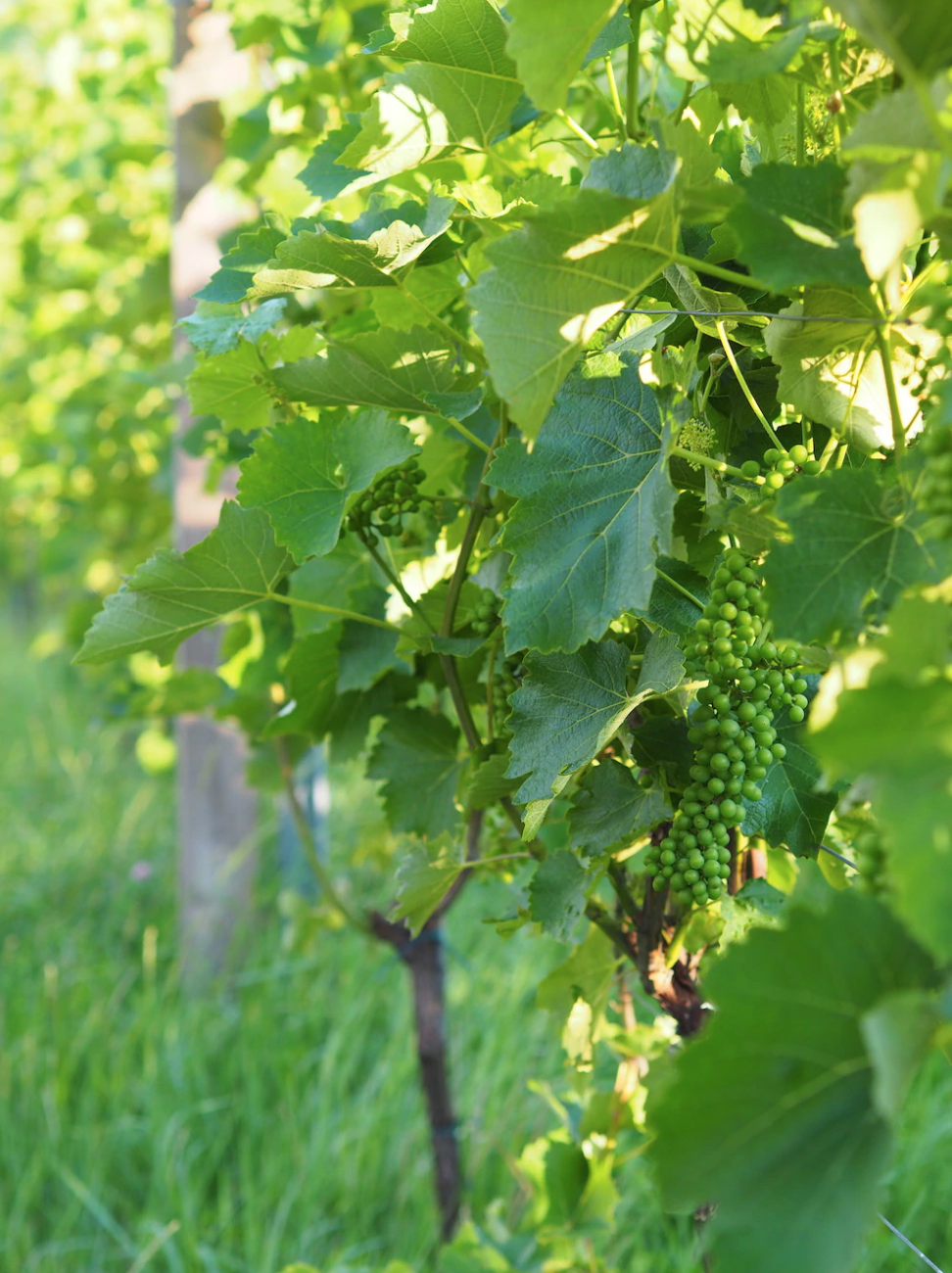 Totter says the change was drastic and overnight. He was able to implement biodynamic farming immediately and has needed to spray his vines with copper or sulfur maybe once every few years since 2012—this after he averaged some two dozen treatments per year. Natural ferments are strong each fall and require fewer and fewer sulfites for cleanliness and stability. (Some cuvées now have none.) Perenospera is almost nonexistent. Totter is very proud of this accomplishment in just a decade—all of which would be interesting only if the wines weren’t good. But they’re excellent.

The combination of Pannonian and pre-Mediterranean climates in Vulkanland is neatly represented in the two soil types on which Josef works: volcanic clay and shell limestone; the Muscaris and Souvignier Gris seem suited to them. All the fruit is hand-harvested, then the very best grapes are removed to terra cotta amphora—crafted in Tuscany by friends—for fermentation and aging, while the standard grapes for the vintage are fermented and aged in big old 750L botti. Totter makes three wines with each variety: a direct-press white, a skin-macerated white, and a sparkling; the wines have all the roaring acidity of their famous south Styrian neighbors, with a beguiling texture and fruit that gives them balance and shape.

We’re amazed at how accomplished these wines are—we’ve been saying that were we to give these wines to friends blind, it’s impossible anyone would know they aren’t fully vinifera. In the case of the top cuvée ‘Salon Helga,’ we’re certain most wouldn’t guess anything but Champagne. We’re so happy to represent Josef Totter’s brilliant and forward-thinking wines from PiWi grapes, and we hope he’ll be a sign of what’s possible in viticulture for many other regions and vignerons.

"To make wine without being addicted to industrial products is really nice. 😊" - Josef Totter 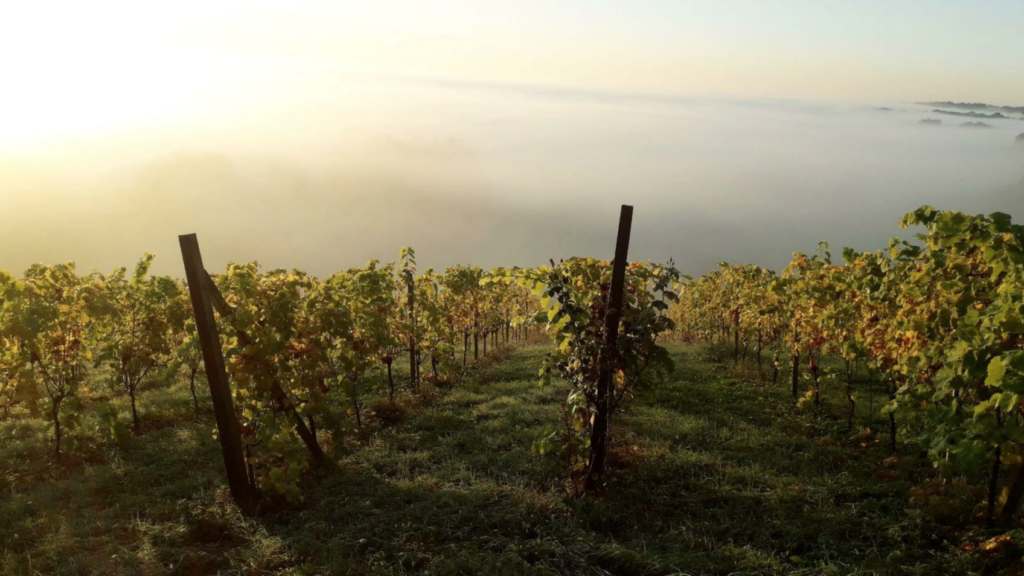 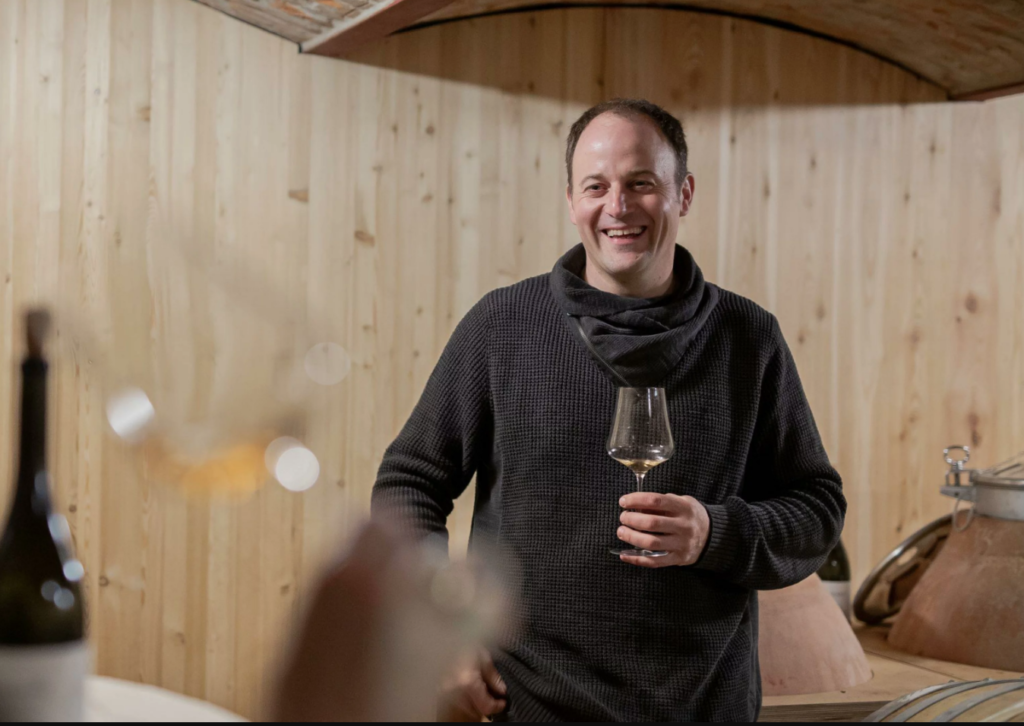 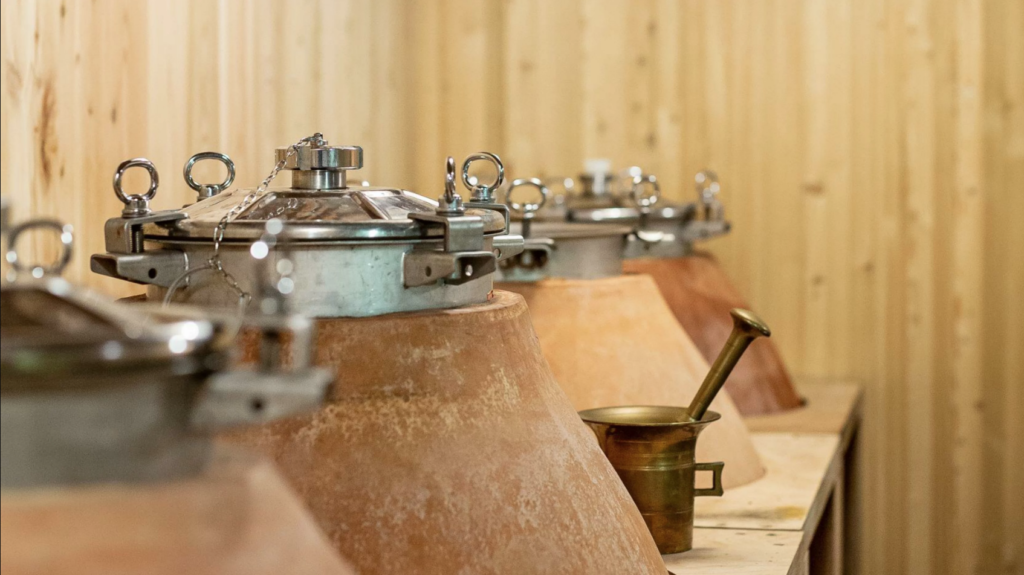 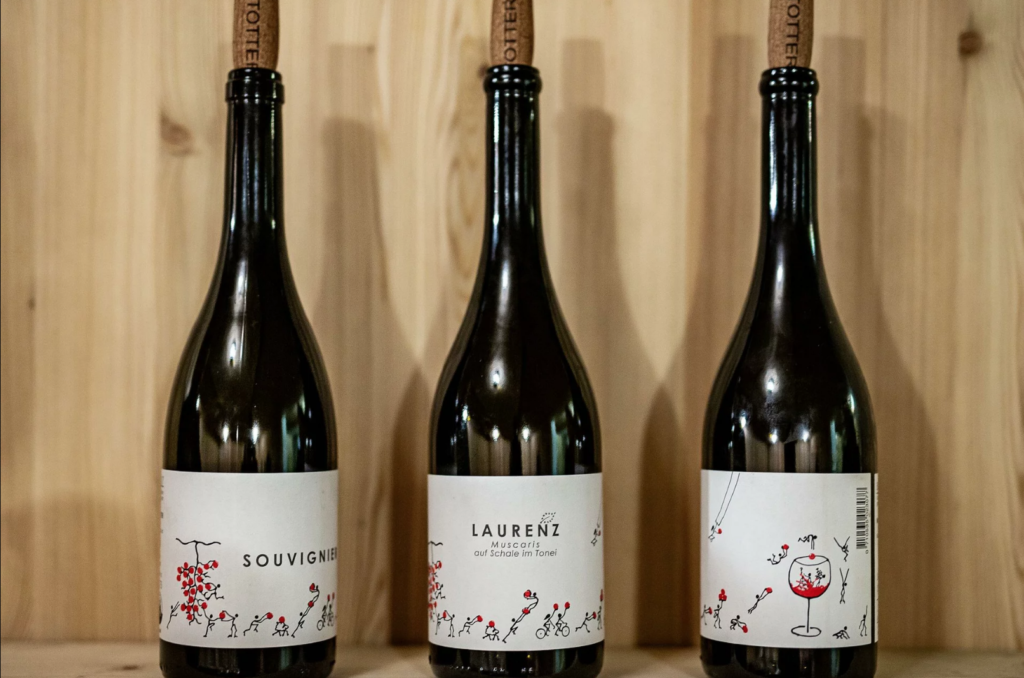 100% Souvignier Gris (PiWi variety, a cross of Cabernet Sauvignon and Bronner). Base wine is 2018, fermented in 300L barrels, aged for one year on lees. Newly fermenting juice from the ‘19 harvest was added, then the wine was bottled to obtain natural bubble. Aged on lees for two years; disgorged fall ‘21. Zero added SO2. ‘Helga’ is Totter’s wife. Josef says he made this wine because ‘we love to drink Champagne, but it’s too expensive.’

100% Muscaris (PiWi variety, a cross of Muskateller and Solaris). Direct pressed, fermentation begins in stainless, then he immediately moves the wine into bottle to complete fermentation (méthode ancestrale). Disgorged after 9-10 mos’ aging on lees. The most fiery, lean, acidic number we’ve maybe ever seen in a pét-nat.

100% Muscaris (PiWi variety, a cross of Muskateller and Solaris). Direct pressed and fermented in 750L used botti. Nearly one year in barrel before bottling. Aromatic, bright, dry, with volcanic minerality as the baseline.

100% Muscaris. Hand-harvested, fermented on the skins in Tuscan terra cotta amphorae for three weeks. Pressed off afterward and moved to 750L used barrels for 11 months. Zero added SO2. ‘Laurenz’ is always taken from the best Muscaris grapes of the harvest; it’s the name of the Totters’ firstborn son.

100% Souvignier Gris (PiWi variety, a cross of Cabernet Sauvignon and Bronner). Direct pressed and fermented in 600L botti, aged for 11 months. Savory, ripe, and herbal, with searing acidity and a volcanic fingerprint.

Organic, Biodynamic. 100% Muscaris (PiWi variety, a cross of Muskateller and Solaris). Direct pressed and fermented in 750L used botti. Nearly one year in barrel before bottling, 30mg/l SO2 added just before bottling. Unfined, unfiltered. Aromatic, bright, dry, with volcanic minerality as the baseline.

Organic, Biodynamic. 100% Muscaris (PiWi variety, a cross of Muskateller and Solaris). Hand-harvested, fermented on the skins in terra cotta amphorae for three weeks. Pressed off afterward and moved to 750L used barrels until bottling in August, around 11 months later. Unfined, unfiltered, zero added SO2. ‘Laurenz’ is always taken from the best Muscaris grapes of the harvest; it’s the name of the Totters’ firstborn son.

Organic, Biodynamic. 100% Souvignier Gris (PiWi variety, a cross of Cabernet Sauvignon and Bronner). Direct pressed and fermented in 600L botti, aged for 11 months. Bottled in August, with 20mg/l SO2 added just before bottling. Unfined, unfiltered. Savory, ripe, and herbal, with searing acidity and a volcanic fingerprint.

Organic, Biodynamic. 100% Souvignier Gris (PiWi variety, a cross of Cabernet Sauvignon and Bronner). The base wine is 2018, which was direct pressed, fermented in 300L barrels, then aged there for one year. Newly fermenting juice from the 2019 harvest (30%) was added to the base wine, then bottled to obtain natural bubbles. Aged on the lees for two years; disgorged fall 2021. Unfined, unfiltered, zero added SO2. ‘Helga’ is Totter’s wife.