Originally from the Jura, Nicolas Jacob worked on several local organic vegetable farms before developing an interest in wine. During this time, Nicolas established an admirable knack for searching out the best mentors in the area. After spending time with Laurent Macle at Domaine Macle in Château Chalon, where he learned how to craft some of the finest traditional oxidative Jura wines, Nicolas found work in the vineyards with Jean-François Ganevat, where he eventually became the right-hand man at the domaine. Here, Nicolas perfected his skills across all aspects of the domaine, from vineyard work to vinification.

In 2015, Jacob purchased just over 1 hectare of vines in L’Etoile, planted to Chardonnay, Pinot Noir, and bit of Savagnin, and began to develop his own style (which is clearly inspired by his time chez Ganevat). As expected, the norm is natural fermentation, absolute minimal use of SO2, long aging, and a slightly confounding preference for a multitude of exceptional micro-cuvées based on variations in the terroir.

In 2019, Jacob fully ventured out on his own and acquired a small winery in Cesancey, as well as 5+ hectares of vines in the surrounding area, including a 3.5-hectare block in Augea and one hectare in Rotalier. 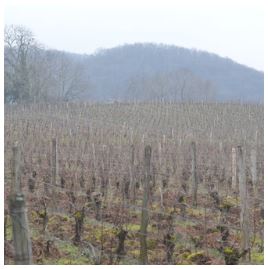 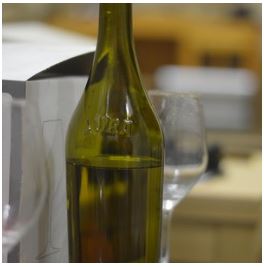 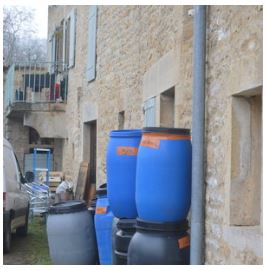 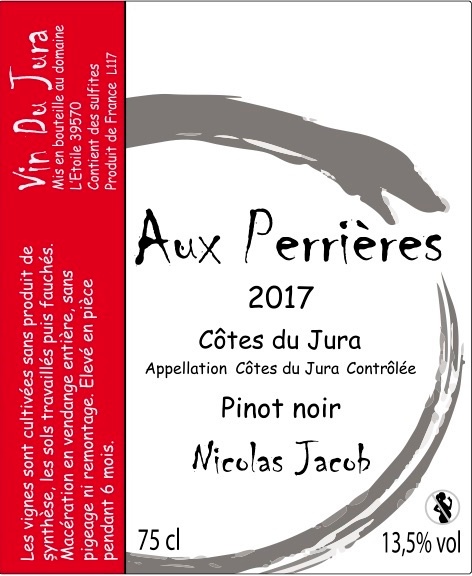 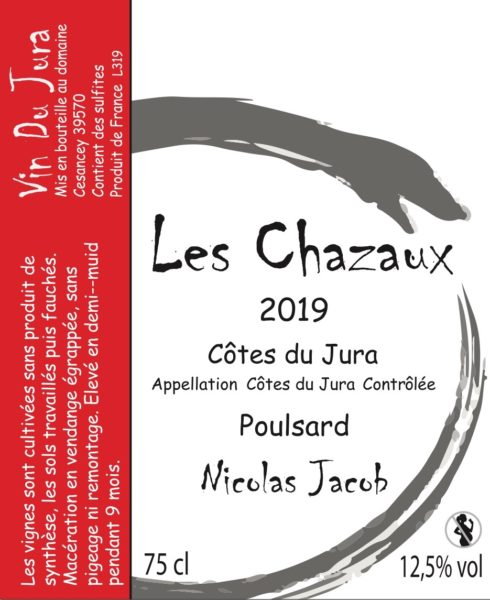 Organic. 2019 was Jacob’s first harvest of his newly reclaimed vines in Augea, a village near Revermont in the southern part of the Jura. The parcel is 3.5 hectares total, with 0.60 ha planted to Poulsard. The vines were planted 1975-83 and located at 275-meter altitude. Hand harvested and 100% destemmed. Spontaneous fermentation in fiberglass tank and aged for 9 months in used barrels. No additions of any kind including SO2. 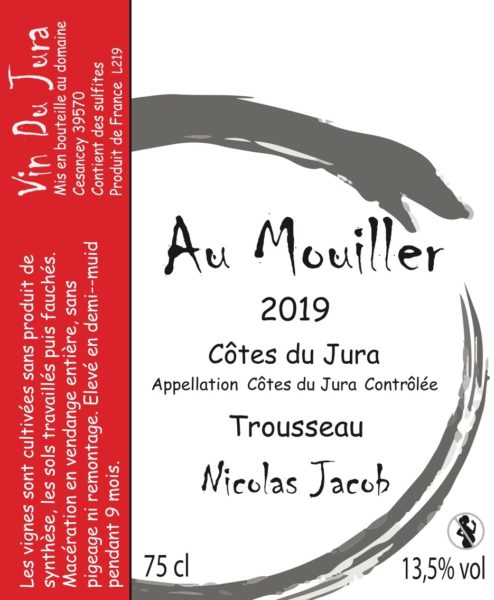 Organic. 100% Trousseau. 2019 was Jacob’s first harvest of his newly reclaimed vines in Augea, a village near Revermont in the southern part of the Jura. The Trousseau “Au Mouiller” comes from two tiny parcels around Augea. 50% is from limestone soils in Au Mouiller and 50% is from the marl terroir in Les Chazaux. Because he will have several other cuvées from Chazaux he kept the name Au Mouiller for the Trousseau. The vines were planted 1975-83 and located at 275-meter altitude. Hand harvested and 100% destemmed. Spontaneous fermentation in fiberglass tank and aged for 9 months in used barrels. No additions of any kind including SO2. 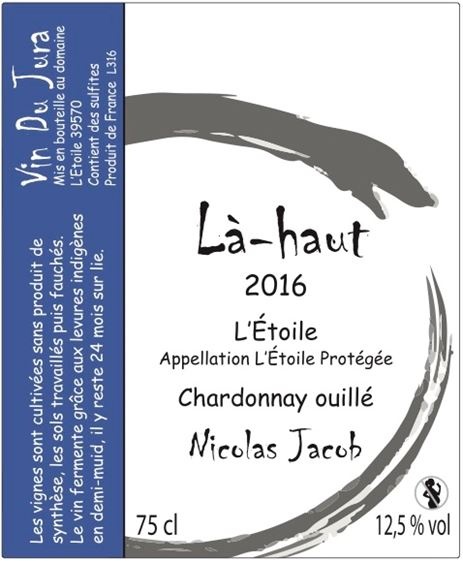 Organic. 100% Chardonnay. Vineyards: ‘Là-Haut comes from the upper part of Nicolas’ vineyard in L’Etoile. Vine Age: planted 1953. Size: 0.70 hectares (total vineyard size of Là-haut and Là-bas). Terroir: marl. Vinification: settling for 12h after manual harvest. Alcoholic fermentation in 228L barrels. Elevage: 18-24 months in demi-muid. Vinifcation is ‘ouillé’ (topped-up barrels) to prevent oxidation. ‘Là-haut’ is typically aged longer than ‘Là-bas,’ but the ultimate decision on bottling is based on tasting. No additions of any kind including SO2. 650 bottles produced. 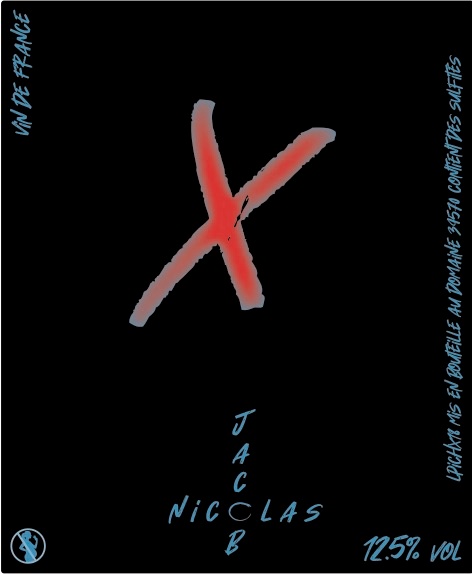 Organic. Blend of various unidentified old vines of red grapes from a vineyard near Lons-le-Saunier et Augea. Vine Age: unknown age, but certainly planted before WWII. Size: 0.10 ha Terroir: trias marl. Vinifcation: direct press (no maceration). Elevage: 8-9 months in fiberglass tank. No additions beyond 15 mg SO2 added after malo completed. 300 bottles produced. Jacob’s “X” Vin de France comes from a sliver of hybrid “tenturier” vines that were planted sometime before 1940. A “tenturier” is a clothes dyer, and the name comes from the dark color of the juice. Hybrids are naturally resistant to disease, but were phased out because they were considered to produce inferior quality wine. Nicolas has an alternative hypothesis whereby synthetic chemical companies promoted this rumor so that these resistant grapes would be replanted with vinifera grapes that “required” more chemical treatments. 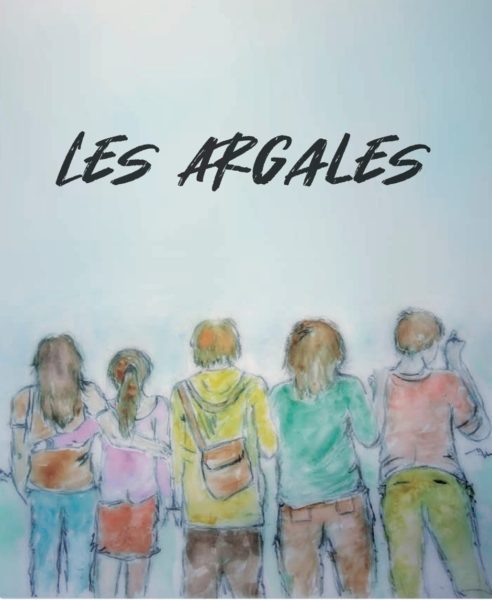 Organic. 80% Chardonnay and 20% Savagnin. Les Argales is a blend of Chardonnay from Jacob’s “Là-bas” vineyard and Savagnin from “Aux Perrières” in L’Etoile. Yields in 2018 were unusually high, but fermentation was difficult, so the two varietals were blended together. Fermentation eventually finished after adding the actively fermenting lees from the 2019 Savagnin, and Nicolas is pleased with the result (though not planning to repeat the process). “Argale” is a local term for a ne’er-do-well, someone who is good for nothing and constantly strays from the right path. It’s usually used endearingly, and has a comical implication. Nicolas thought the word aptly describes this wine, and it’s also a term that his friend’s father used to describe his band of buddies growing up. The vines were planted 1983. Hand harvested and settled for 12 hours. Spontaneous fermentation in 228 L barrels. No intervention until bottling. No additions of any kind including SO2. Aged for 12 months in used barrels.