Since his inaugural release of only 2000 bottles in 2005, Olek Bondonio has quietly been making a name for himself as a star on the rise in Barbaresco. While he’s not yet a household name, that is changing rapidly. His Barbarescos have begun to acquire a very strong following amongst Piedmont collectors in the know across the globe (his wines have a strong following in Scandinavia and Japan, places that are often far ahead of the curve on discovering the next star producer) who snap up his tiny production wines upon release. His disinterest in submitting wines for review along with his tiny production and preference for being in the vines are the only reasons he’s not already a star in the US. Olek’s wines, much like Olek himself, are honest, soulful and transparent. He’s much more likely to be found in his vines than actively selling or promoting his wines (as of writing this he still doesn’t have a website). His is a quiet confidence of someone who knows what he’s doing and is happy to let the recognition come to him rather than chase after it.

Saying Barbaresco is in Olek Bondonio’s blood wouldn’t be too far from the truth. His ancestors have been in the Barbaresco area for centuries years and were instrumental in the creation of the Barbaresco region itself. In 1894, Olek’s great-great-great grandfather, Guglielmo Como, was one of the founding members of the Barbaresco Cantina Sociale, better known today as Produttori del Barbaresco. Olek grew up in Torino and spent summers at his familial home, La Berchialla, which has been in his family’s hands for over 200 years. Here he was introduced to vineyard work and winemaking. La Berchialla, though, is not your typical old Italian farmhouse. It’s blessed with an ideal location sitting at the top of the Roncagliette cru, one of Barbaresco’s top sites. Made famous by Olek’s next door neighbor, Angelo Gaja (who bottles the vineyard under the Sori Tildin name), Roncagliette is a steep, southwest-facing ampitheatre of vines. After a decorated career in snowboarding, Olek felt the pull of the vines and shifted his focus to wine. He spent time in Bordeaux, Australia, and New Zealand, before returning to take over La Berchialla and his family’s 3 hectares of old vines in Barbaresco.

Olek’s approach is as hands-on as one can get. He prefers to do all of the work himself, both in the vineyard and in the winery. Working organically (certified in 2018) while using biodynamic principles, Olek focuses on growing healthy, balanced fruit in his two plots in Barbaresco- Roncagliette and Starderi, as well as his other plot Altavilla (Langhe). The majority of his grapes are Nebbiolo, but he does grow Barbera, Dolcetto as well as 4 rows of heirloom Piedmontese varietal Pelaverga which grow in the Roncagliette vineyard. While Olek is a supremely talented winemaker as well, he’ll be the first to say the quality from his wines comes from the incredible time spent in his vineyard.

In his cellar at La Bercialla, Olek prefers traditional winemaking techniques of using a basket press, spontaneous fermentations in concrete, extended macerations of up to two months on the skins, and extending ageing in Slavonian botti grande before bottling. He also brings a natural winemaker’s sensibility to the wines, preferring to do as little as possible to the wine during this time. Little to no sulfur is added during ageing and the wines are bottled without fining or filtration. This approach creates wines that have a haunting, unadultered beauty and depth to them. 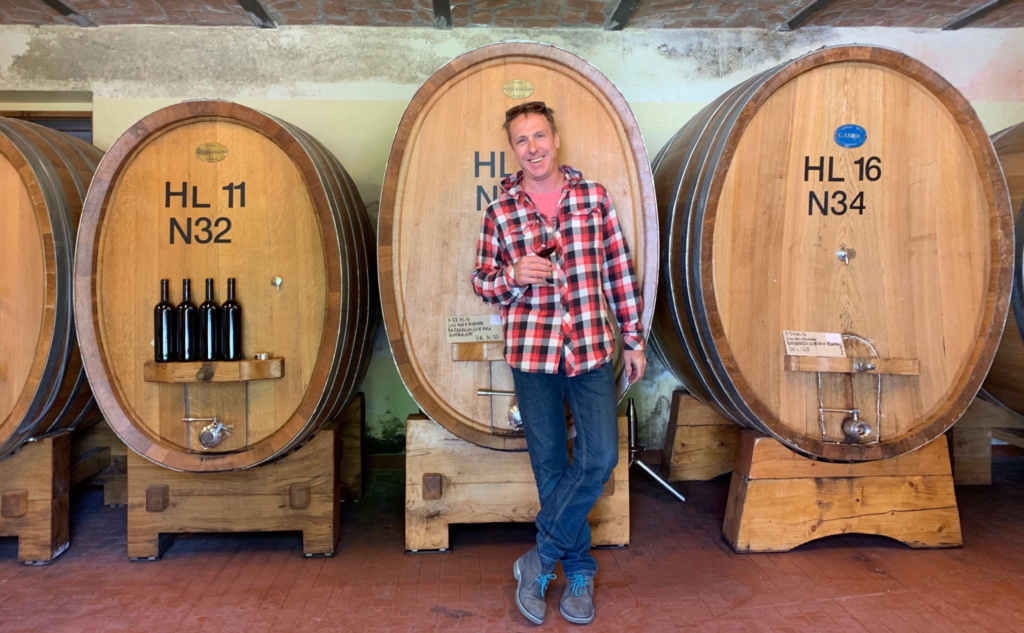 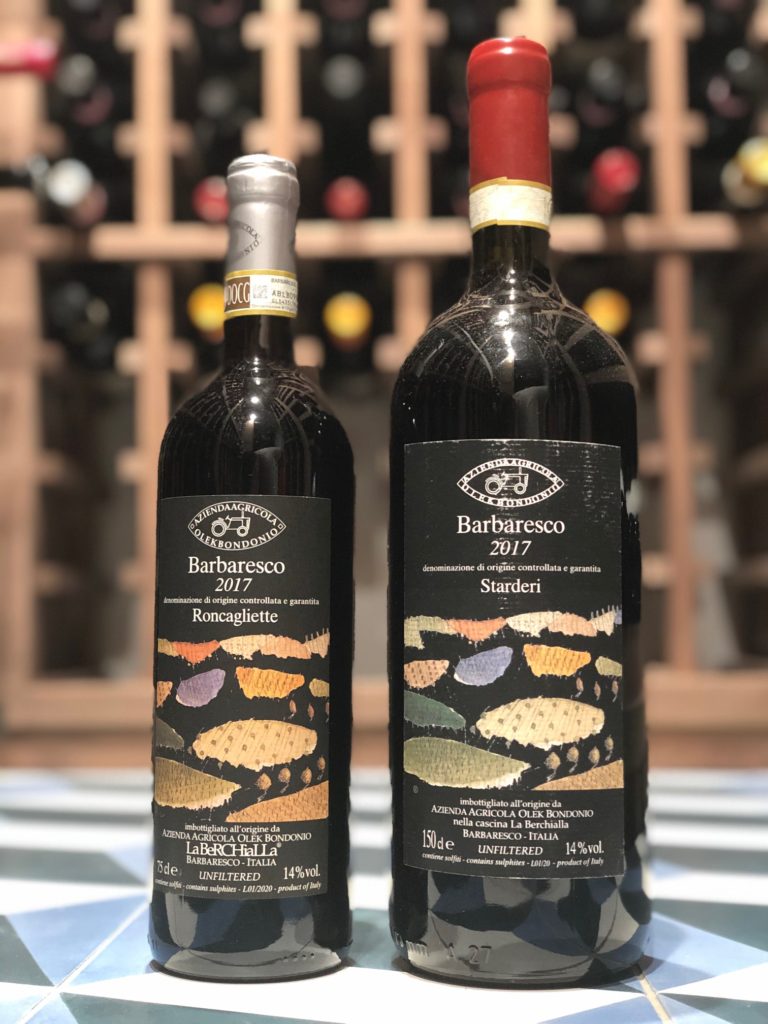 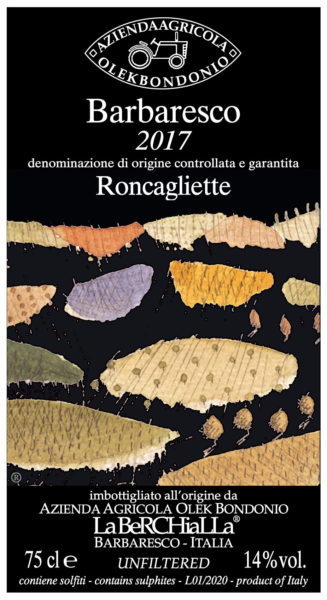 Practicing Biodynamic & Certified Organic. 100% Nebbiolo. Nebbiolo made from grapes grown in Olek’s front yard, a small parcel his family planted around fifty years ago in one of Barbaresco’s most famous crus, Roncagliette. This is the same vineyard that Olek’s close neighbor, Gaja, bottles under the Sori Tildin cru which sells for $500+/btl upon release. Heavy blue clay atop limestone at 350 meters. The site sits at the top of a hill shaped in an ampitheatre. It’s quite windy and further from the river so it’s a dry, warm microclimate that is fully exposed to the south with firm clay-limestone soils which have a lot of compacted sandy soil that’s filled with minerals like magnesium (which gives a saltiness to the wine) that lend the Nebbiolo from here both power and finesse. Hand-harvested, basket-pressed, spontaneously fermented and macerated on the skins for two months (with a submerged cap) in concrete before being pressed off to old botti (Slavonian- Gamba and Austrian- Stockinger) for a couple of years. Bottled unfined and unfiltered. This is old-school Nebbiolo with a natural winemaker’s sensibilities. A wine of incredible complexity, power and poise where every little thing is perfectly in place. 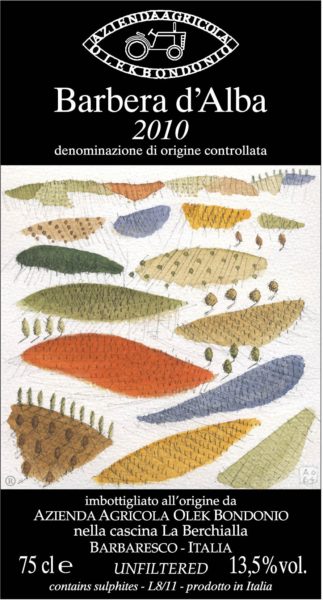 Practicing Biodynamic & Certified Organic. 100% Barbera. Vineyard: Altavilla. This vineyard sits high in the hills east above the city of Alba in the direction of Barbaresco. The exposition ranges from east-facing at the top of the hill, south-facing in the middle, and to west-facing at the bottom of the hill which allows for sun exposure all day long. The top of the hill receives morning sun and maintains sun in afternoon at the bottom of the hill. Producers including Gaja, Giacosa, and Ceretto all work in this vineyard as well. The average vine age here is 40+ years with most vines planted 45 years ago and some planted 5 years ago. The soil is compact clay. Native fermentation in temperature controlled stainless steel (Barbera tends to ferment quite hot so Olek likes temp control for Barbera) with some punchdowns/pumpovers for anywhere from 10-16 days until fermented dry. Basket-pressed very lightly then free-run and pressed juice go together into stainless steel for malo. Once malo is done, the wine is moved by gravity into 1600 liter oak botti for elevage which lasts 8-10 months. Bottled by gravity with no fining or filtration of any kind and only a tiny addition of SO2 (22 mg free).