Valfaccenda, founded in 2010 by the husband and wife team of Luca Faccenda and Carolina Roggero, is focused exclusively on the Roero.  Here, in the high-altitude, steep, sandy slopes on the north side of the Tanaro River, they are laser focused on vinifying the terroir of their home through the lens of just two grapes: Nebbiolo and Arneis.

Luca and Carolina first met in 2004 when she was a graphic designer and he was an oenologist.  Luca’s family has a long history in the Roero, with their family name first being noted on a map from 1749 that lists the name of a valley in the heart of the Roero as Valle Faccenda.  This is where Luca’s family has lived for hundreds of years and where his family still resides.  When he was able to reclaim an expired grape contract for his family’s vines, they started Valfaccenda.  Immediately they set to converting the vines to certified organic viticulture and renovating the century old family farmhouse. “We practice organics for ourselves and for our land expression. It’s important for us to work in a manner that if our children want to carry on the work, they can” says Luca.

Talking with Luca and Carolina, it becomes abundantly clear just how passionate and focused they are on charting their own course to shine the spotlight on the Roero.  They have the iconoclastic mindset where everything they are doing is part of a vision for what the wines of the Roero can and should be- there’s no imitation of the famous surrounding regions- just innovation that is showing exactly what is possible in the Roero.  In their own words “We strongly believe that a wine may exist only as a natural consequence of a territory and as a result of a pondered approach both in vineyard and in cellar.  We make authentic wines that are strongly characterized by Piedmont and Roero taste. Our wines should transfer its origin to the drinker: the scents of the vines and the taste of the grape, the health of the plant and the gurgling of the barrel. We work in the same way both in the cellar and in the vineyard: our wines are the result of a vinification that do not take away or add anything to the natural transformation of the grapes, since we believe in a conservative enology.

Most of their vineyards lie close to the cascina, mostly in Valfaccenda, in Canale on the hills which line Le Rocche – a proper landmark in Roero – with few old plots rented in Valmaggiore in Vezza, Madonna di Loreto in Canale and San Grato in Santo Stefano Roero. In total they now farm 3.5 ha of vines.  The soils of Roero are made of sand – precisely called ‘sabbie astiane’ – that anciently formed the sea bed of Padania gulf, mixed with older clay sheets and small quantities of silt.  The vineyards, most of which sit between 260-400 meters altitude, are incredibly steep, and the majority of the work, including all harvesting, is done manually.  Here, the two most iconic grapes are Arneis and Nebbiolo.  From the start Valfaccenda has focused exclusively on these varieties, conscious that only using the most deep-rooted grapes can they truly vinify a territory. “This terroir helps us to make salty, juicy and chewy wines: this is our natural identity, this is our Roero.” says Luca.

In the cellar, a traditional yet natural approach is taken: strictly indigenous yeasts, long maceration with some whole cluster (reds), extended ageing on the lees (whites), using a basket press, naturally occurring malo, ageing in old wood and cement, bottling without fining or filtering and no additions beyond sulfur at bottling.

“In our wines we try to faithfully translate the vineyards we work, seeking the elegance of the sand and avoiding the unnecessary…” – Luca Faccenda 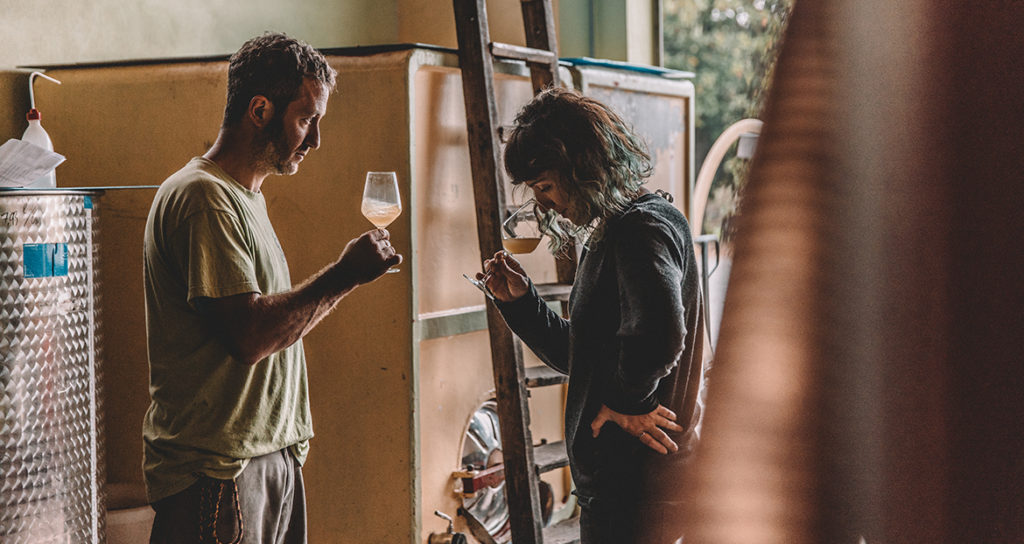 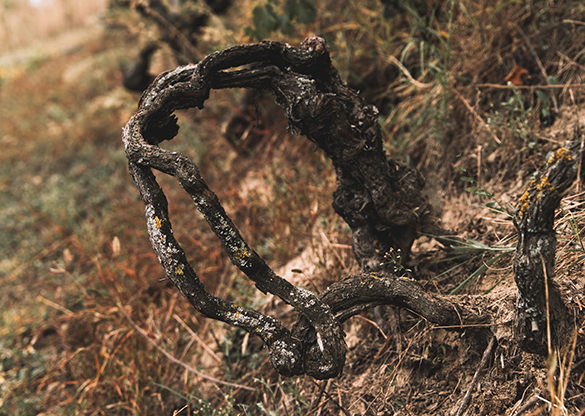 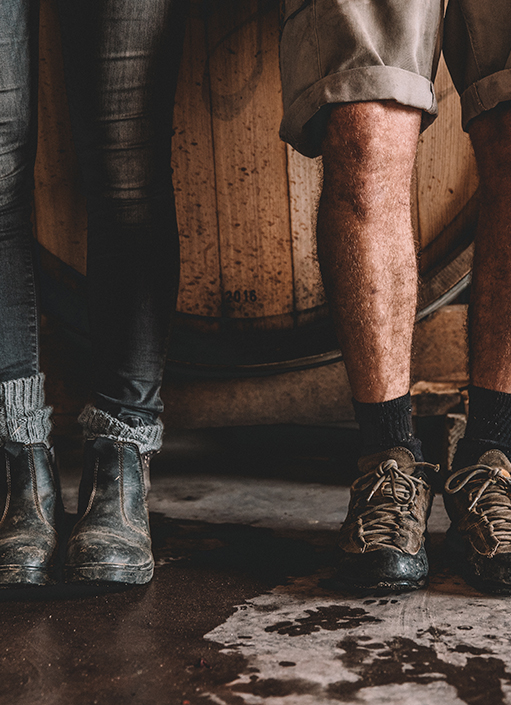 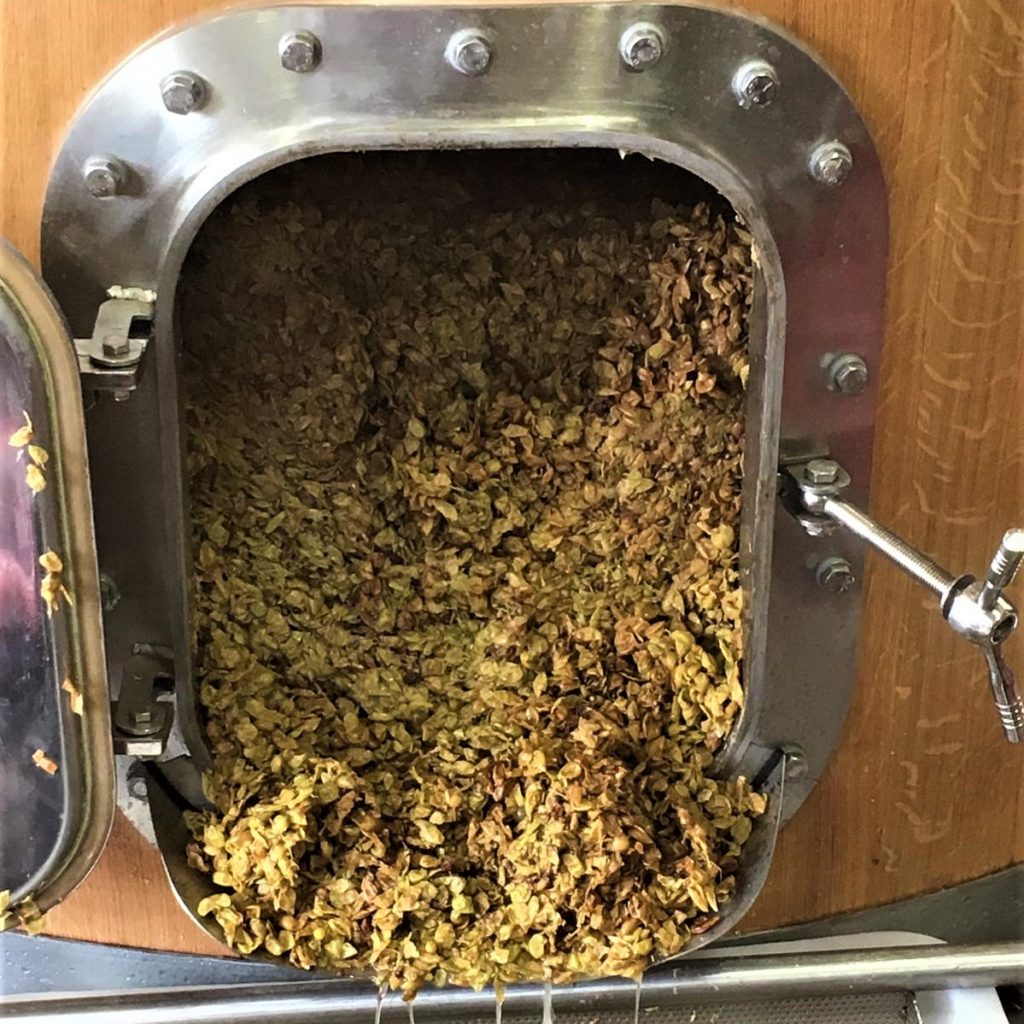 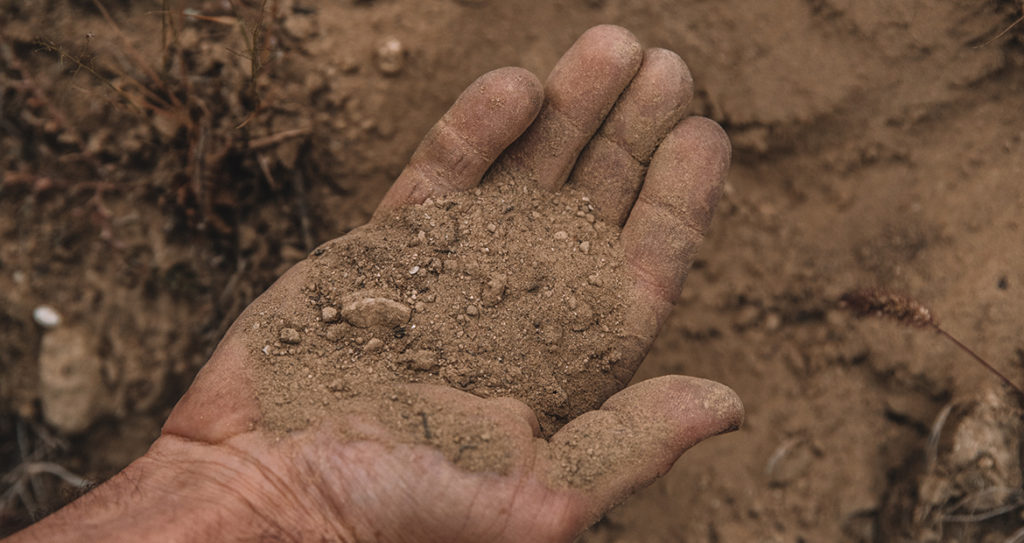 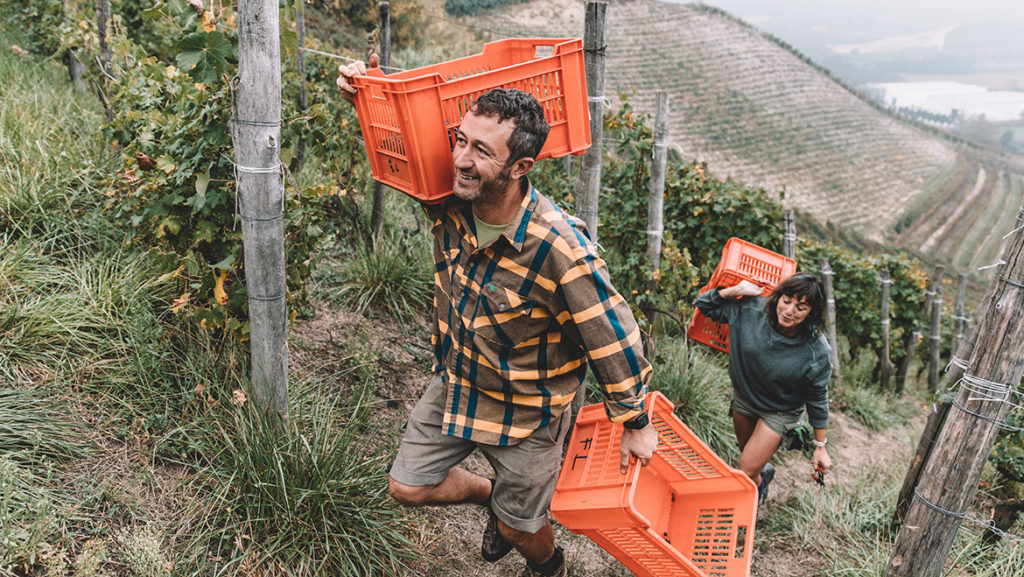 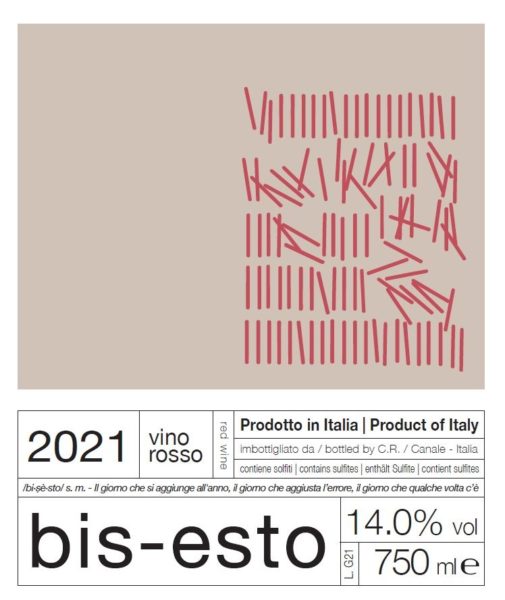 Certified Organic. 100% Grignolino. In 2020, Valfaccenda finally had enough time and resources as they’ve grown as a winery to take on a new little side project about which Luca Roggero has been curious for a long time: the terroir of new appellation for the duo: in this case, Monferrato. This is Grignolino from Monferrato, a native Piemontese variety which doesn’t occur in the sandy soils of their home Roero. Sourced from an organic grower of a vineyard of 25 year-old vines who’s a friend to the family, the fruit was macerated for 15 days, fermented in steel, and aged for six months in wood of various sizes (228, 300, 500L). Unfined, unfiltered. 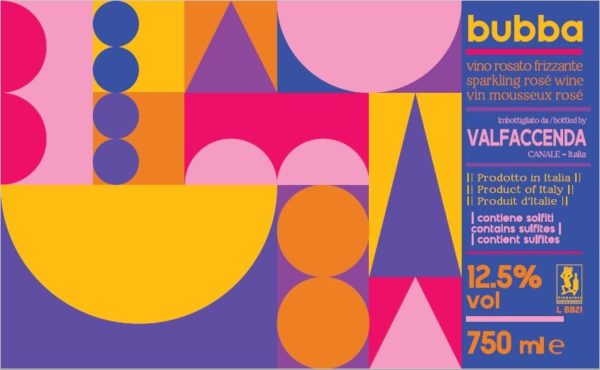 Certified Organic. 75% Arneis, 25% Nebbiolo. An entry into Valfaccenda’s ‘playful’ wines, ‘Bubba’ is a first-time appearance as of 2021. Young vines of Arneis are combined with an early harvest of some younger parts of Valfaccenda’s Nebbiolo vineyards; it’s pressed as a still rosé into stainless steel, then bottled toward the end of winter with the addition of Nebbiolo must to get the wine to referment in bottle and create natural sparkle. Pur jus: a very fun ancestrale style wine normally not seen in the more serious realms of the Roero. 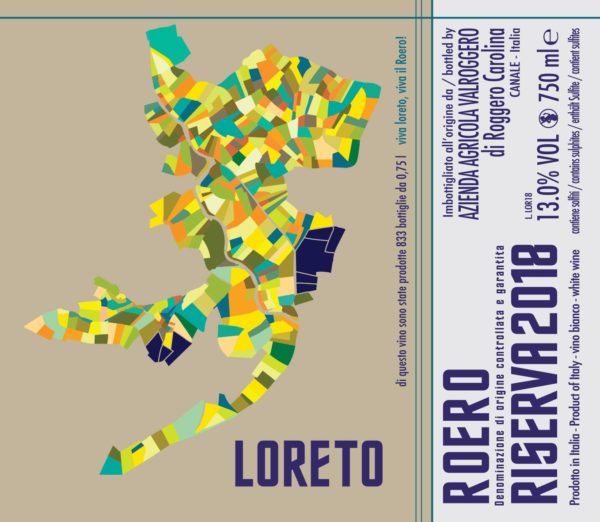 Certified Organic. 100% Arneis. This is Luca Faccenda’s top white wine, an homage to an appellation in the Piedmont still little understood, defined by Arneis on intensely sandy, well-draining soils, on hillside vineyards with elevation. ‘Loreto’ is the Roero bianco riserva from the domaine, from a tiny parcel in the appellation by the same name, vines of 60 years of age. This Loreto was done without maceration, just free-run juice directly into one acacia barrel, aged for 6 – 7 months. Luca retains the lees in the barrel throughout élevage as a way of balancing the oxidative nature of the acacia wood. 2020 was a ‘wide’ vintage, resulting in a wine that’s a little more ‘relaxed.’ Spicy, piquant, vibrantly mineral. Like a more robust or structured salty Chablis.

Certified Organic. 100% Nebbiolo. The vines come from Loreto- sand-loam soils, planted in 1998, east-facing , Mompellini- sand-loam-clay soils, planted in 2008, west-facing, and San Grato, sand and limestone, planted in 1967, southwest-facing. They hand-harvest and ferment each vineyard separately. The grapes are destemmed then pumped into concrete and stainless steel tanks with around 3-5% whole clusters included. Fermentation starts spontaneously and takes, with maceration, approx. 2 weeks. They do soft pigeage and pump a small amount of juice over the cap to extract from the skins. After fermentation they press off in a basket press and then blend the 3 wines together. Loreto brings a fruity nose, some body and good acidity, Mompellini brings color and structure and San Grato brings elegance, floral aromatics and juiciness. After malo they rack one more time in concrete tanks outside (usually in November) and 2 weeks later they rack into botti, a used 500 liter tonneaux, and the rest in concrete. They blend those components together again and rack in April/May and then they don’t touch the wine until November. The wine is then bottled between November and January. 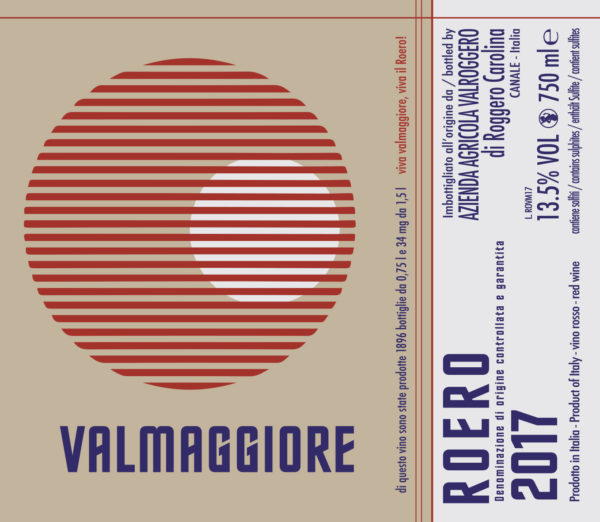 Certified Organic. 100% Nebbiolo. Valmaggiore is a single vineyard located in Vezza D’Alba, planted in 1947 with a south/southeast exposition, sandy limestone soils with a hint of clay. The vineyard is so steep that Luca has no choice but to do everything by hand- a tractor can’t safely navigate this site. The fruit is hand-harvested, destemmed, and moved to concrete tank without pumping but instead with a basket and forklift in order to keep as many berries whole as possible. Gentle hand pigeage and soft pumpovers, one per day, for 2-3 weeks. The wine is then pressed off using a basket press into big casks where malo naturally occurs. After 12 months in cask they bottle and then age the bottles almost 2 years before release. 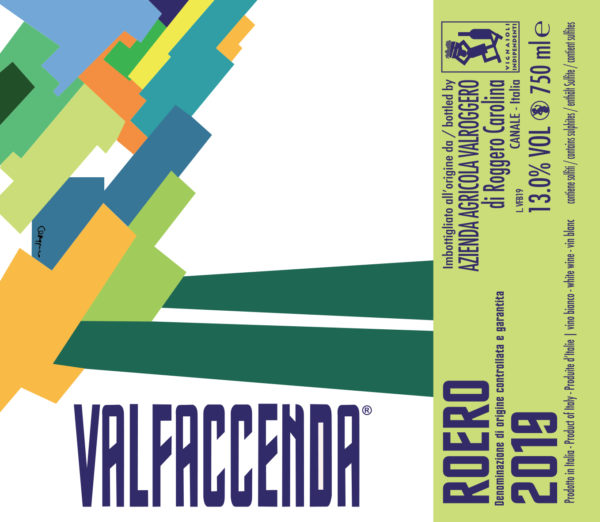 Certified Organic. 100% Arneis. Their classic white comes from different vineyards (Loreto and Mompellini MGA) with different exposition and soil characteristics. Average vines age: 10-15 years, soil mainly sand with some clay and loam. Always following their own intuition, Luca & Carolina make three different harvests, treating each different before finally blending them back together. The first to be harvested are 20% of the Arneis bunches that come from the richer soils in the vineyards, the part where the plants produce more fruit, big berries, rich in juice and acidity with less sugar. They’re destemmed, pressed, racked to tank to settle for one night and spontaneous fermentation kicks off with a pied de cuvee started from a smaller harvest done 7-10 days earlier. This 20% is their “acid part” as Arneis is not an acidic grape, richer more in tartaric rather than malic acid. The second lot, 50% of the grapes, come from the same vineyards as the first 20% but are harvested generally 7-10 days after the first harvest. Here they still get some acidity but more sugar in the juice. Vinification is the same as the first 20%. After malo naturally occurs this wine is racked to a mix of concrete and steel until April when they do the final blend. The final 30% comes from the poorest and lowest organic substance part of the vineyards- exposed to the west and east, from sites named Mompellini and Loreto, where the berries are much smaller, with thicker skins richer in tannins and more ripeness. This part is, like the others, hand harvested, then destemmed and pumped in an oak vat where fermentation on the skins begins. Arneis is naturally very high in polyphenols and lends itself well to skin fermentation. They manage the maceration with hand pigeage and and a maximum of one pumpover per day. After 12-15 days they press off using a basket press and then the wine goes back in the oak vat for the end of fermentation that in total is approx. 3 weeks. After fermentation the wine stays on the lees until malo occurs and even after malo they usually don’t rack off. They usually stir the lees 2-3 times in the winter for the skin-contact portio. In April they do the final blending of all 3 components and rack the wine 2-3 times to avoid clarifying before finally bottling in June/July. Luca describes this as an expression of the fruity and salty side of the Roero. Arneis, vinified naturally, is usually more reserved on the nose but shines on the palate. The wine can be “a little bit nervous” when first opened but with some air and time it comes to live and shows why it’s a reference point wine for the varietal compared to the oceans of generic “white wine” expressions of Arneis made elsewhere in Piedmont. Older generations referred to Arneis as “white Nebbiolo” which suggests something much greater than most present day expressions of the grape. Valfaccenda’s expression is a Renaissance for the grape that shows its true potential.

Certified Organic. 100% Nebbiolo. This is their picnic wine for drinking immediately. It comes from all the young vineyards plus some fruit from some “fresh” exposures in the old vineyards. Steep slopes, sandy/clay soils, and mostly east-facing. Super easy winemaking: 60% is destemmed and whole berry and 40% is whole clusters. They do a 4-5 day carbonic maceration with 3 pumpovers in total in steel. Then they press in the basket press, the wine finishes fermentation in neutral barrel, they rack a couple of times before and after malo and then bottle in November with some residual gas from fermentation to protect the wine since no SO2 is added.