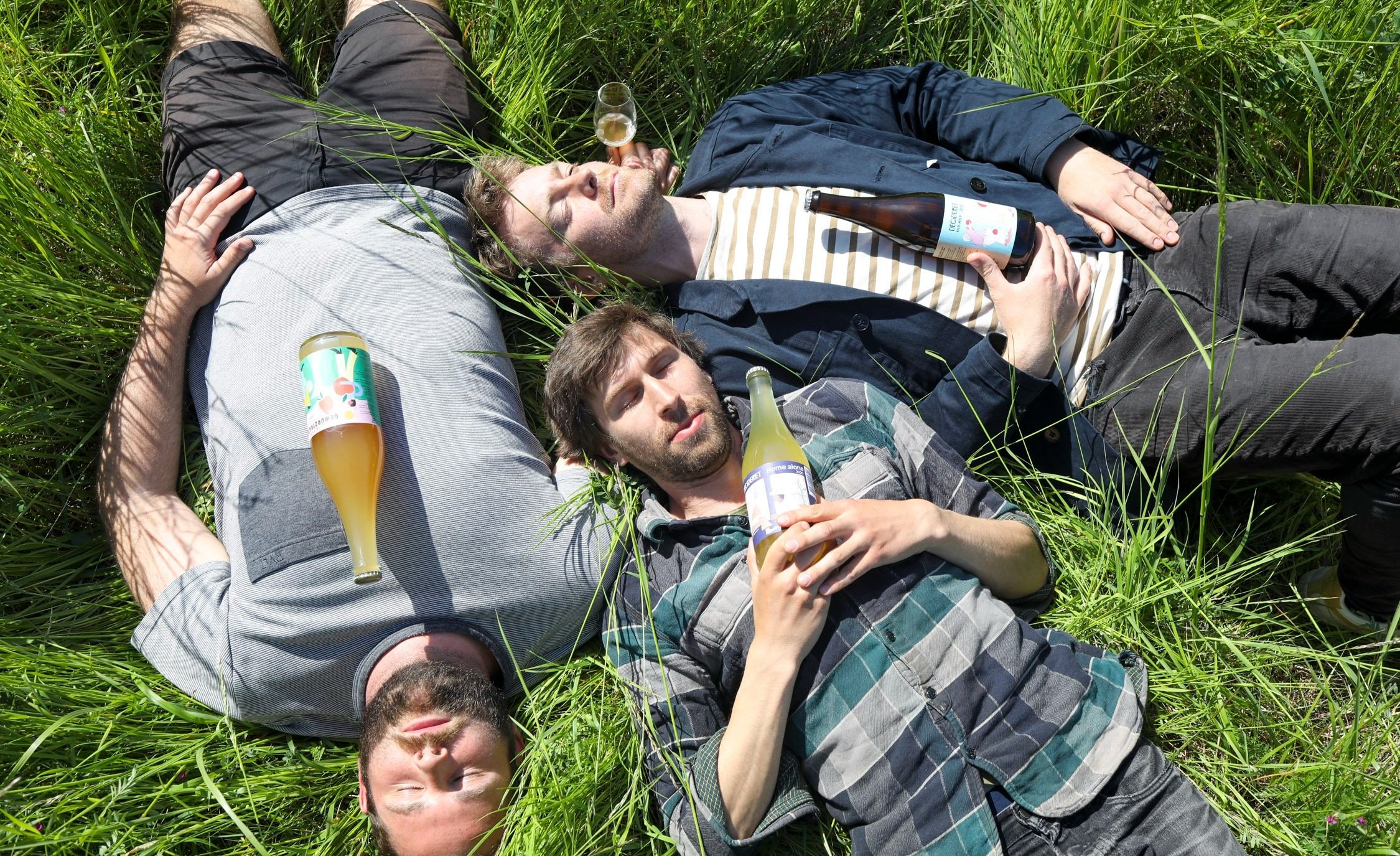 Decideret is the project of three sunny young people in Copenhagen—old high school friends—who don’t come from a winemaking background. Since 2017, Cornelius Simonsen, Jakob Paludan, and Martin Pedersen have been producing deeply refreshing, joyful wines and co-fermentations that startle with their acidity and linear shape. In simple terms, these are organically farmed fruit pét-nats: Nordic sparkling wines made from apple, grape, plum, cherry, pear and blackcurrant. However, they are beverages the likes of which are rarely seen in all of the winemaking world, let alone Scandinavia; they’re not imprecise, funky, nor only experimental.

The trio of winemakers began this project in 2015, initially just as a hobby, after reading an article on cidermaking in the Danish paper Politiken. It was mostly curiosity that provoked their experiments, along with an interesting question: “Why, in Denmark, do we have some of the best apples and fruit—but no tradition for fermenting them into an alcoholic beverage?” 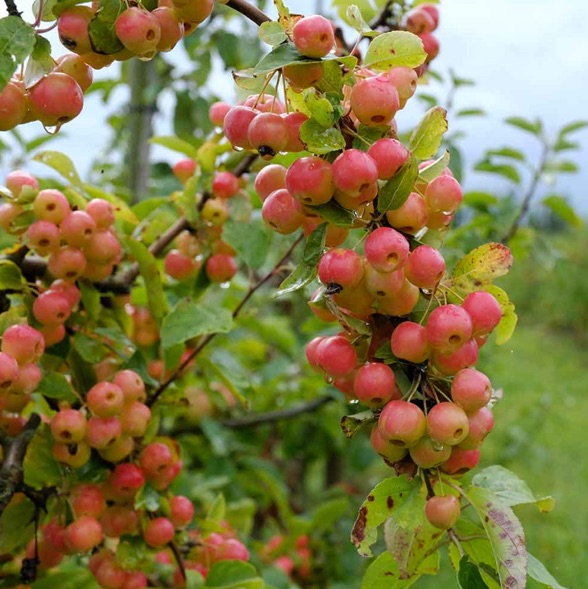 This question has evolved into a clear practice over the last five years for Decideret. Fruit for the wines comes from two general sources: orchards for roughly two-thirds, all of which is organic certified or organically farmed. The latter third or so comes from ‘backyard’ surplus apples. (Cornelius adds: “Authorities estimate that in Denmark around 5 million kilos of apples yearly end up rotting in peoples’ backyards. And that’s only apples. For us, this is a huge waste of a perfect resource.”) The vast majority of the orchard and backyard fruit comes from Fyn, a tiny island in the middle of Denmark—90-120 minutes by car from Copenhagen—known as the ‘Danish fruit garden;’ it has a particular, special climate for raising fruit. The rest hails from either Zealand/Copenhagen or very small islands Fejø and Lilleø south of Zealand. (The latter happens to be where Claus Meyer, Noma founder, has his proprietary orchard from which Decideret gets fruit for their cuvées ‘Who the F*ck Pears?,’ ‘Lees is More,’ and a few others.) At their winery in the neighborhood of Nordhavn, Copenhagen, the trio ferments all of these various fruits with indigenous yeasts and low-intervention winemaking, so the wine stays true to the sources, alive and vibrant.

Decideret says of their work that they’re “working to push the boundaries for what fruit in a bottle can be.” We’ve seen many signs in recent years that Americans are becoming more and more aware of the beauty of wine produced from fruit that isn’t vitis vinifera: we’re happy to add this orchard-savvy band of Danes to our corral of domestic and international producers working with under-valued, misunderstood fruit. Think of it a re-evaluation of the fruit we deem less ‘noble’ and the value systems by which we judge what nobility is. Or just understand it as friends with moxy making fine examples of the exact beverage you reach for at the end of a long night, when you’re exhausted by ‘normal’ wine or beer and want something to refresh and vivify while you dance on your buddy’s living room carpet. Decideret’s precise and vibrant fruit pét-nats are just the thing we need. 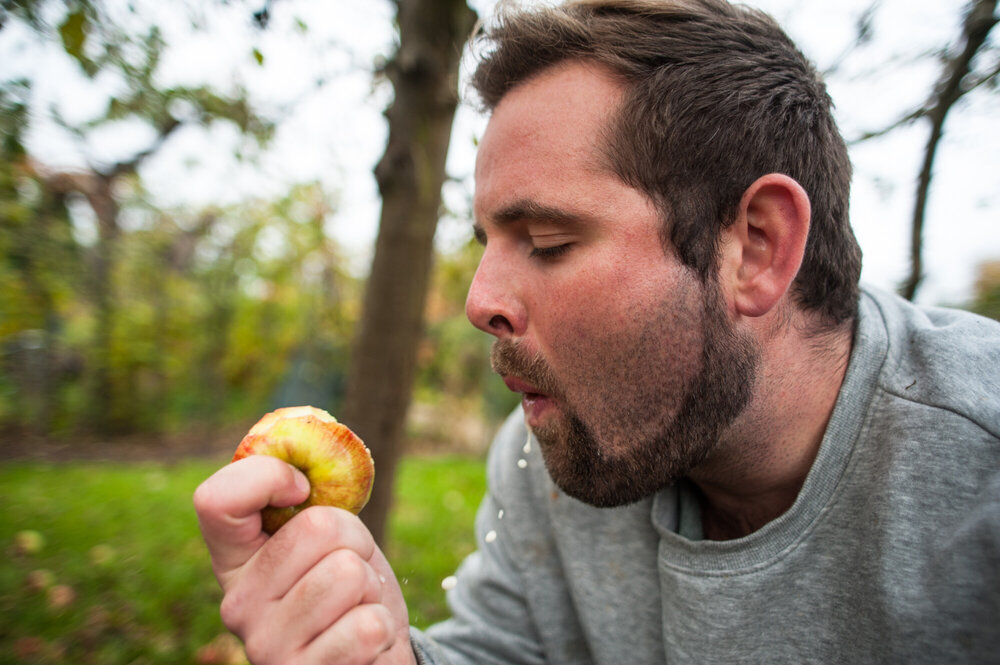 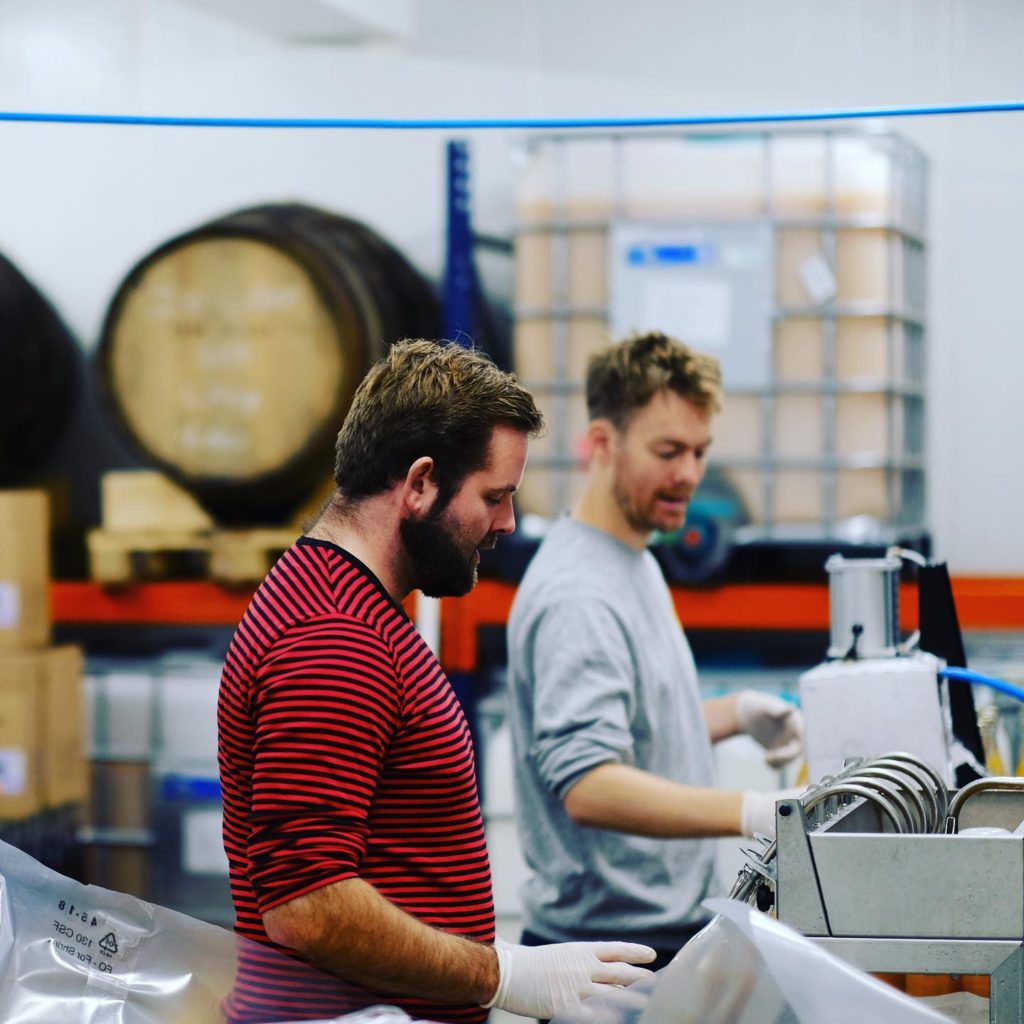 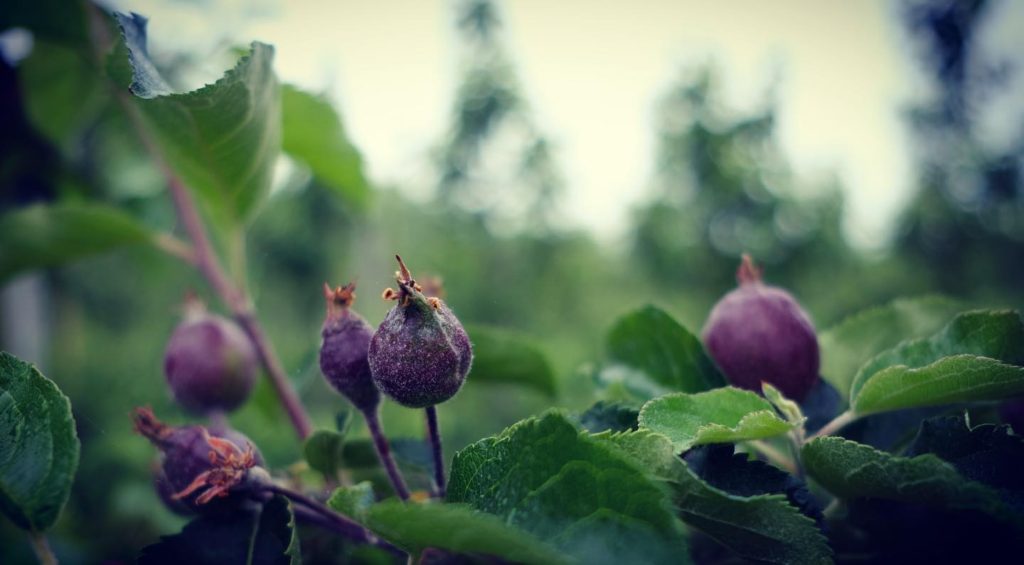 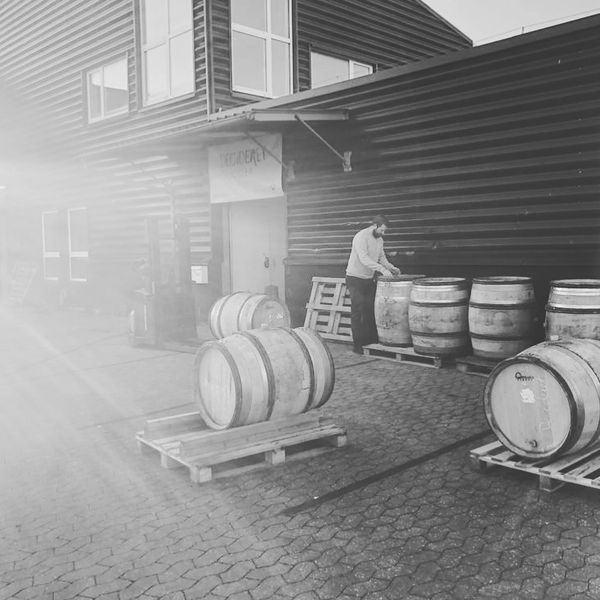 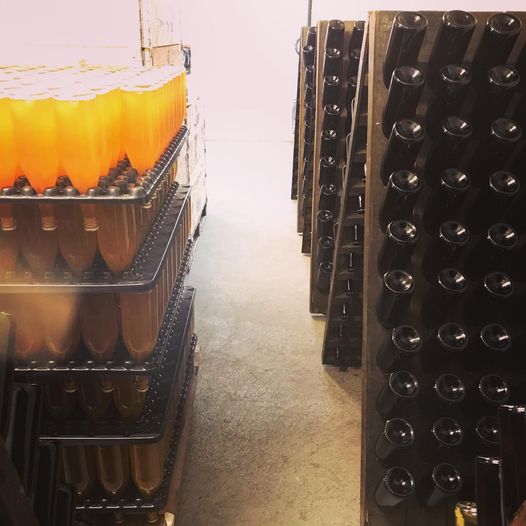 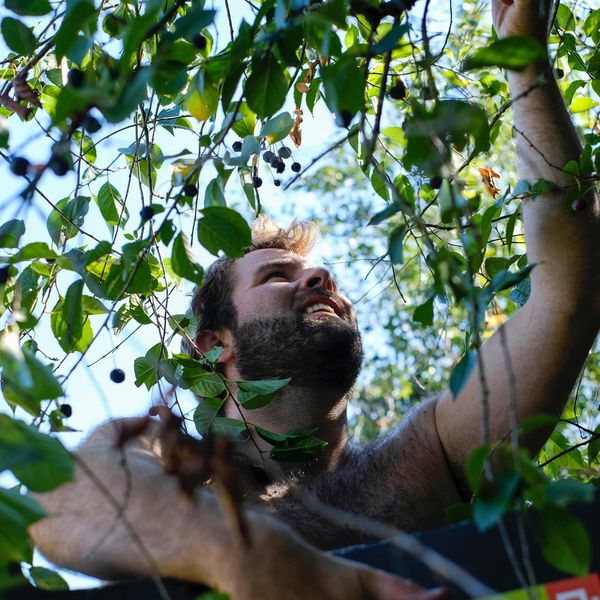 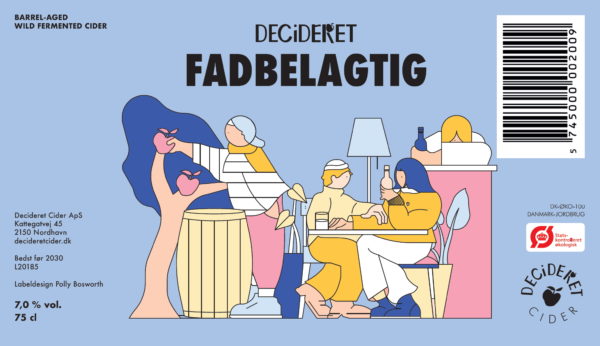 Certified Organic. Holsteiner Cox (67 %) and Topaz (33 %). Fadbelagtig is an organic bourbon barrel-aged cider. Lambic nose, a bit of funk, complexity and fresh acidity. The dry cider from Holsteiner Cox has aged a year on a bourbon barrel. In the autumn 2019 it was blended with freshly pressed Arista adding depth but also freshness and fruit. Second fermentation on the bottle and disgorgement by hand. Dry. 7% alcohol. No filtration. No added sulfur. 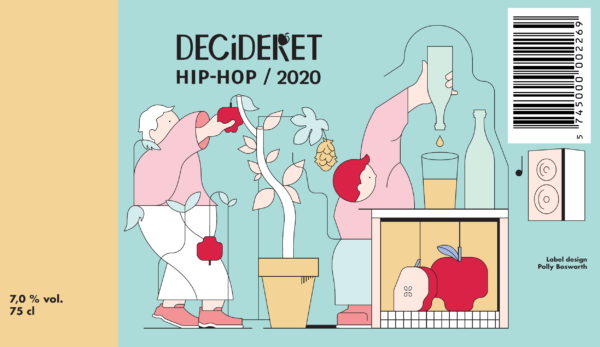 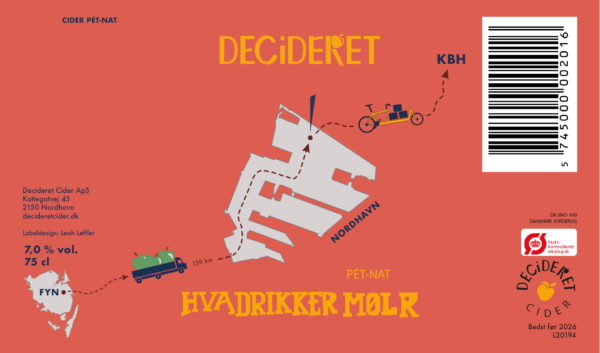 Certified Organic. Rød Aroma (70 %) and Topaz (30 %). Made from the eating apple varieties from the orchards Lystgården and Ådalen on the island Fyn (Funen). Rød Aroma was fermented with skin-contact for two months and bursts with juicy fruit and bitter grassy notes on the nose. Rød Topaz (30 %) adds fresh acidity and depth. It went through 2 months of maceration with the apple pomace. Unfiltered, bottle fermented and bottled by hand in the cidery. Bottled just before Christmas 2019, to finish it’s fermentation under the capsule. Dry. 7% alcohol. No added sulfur. 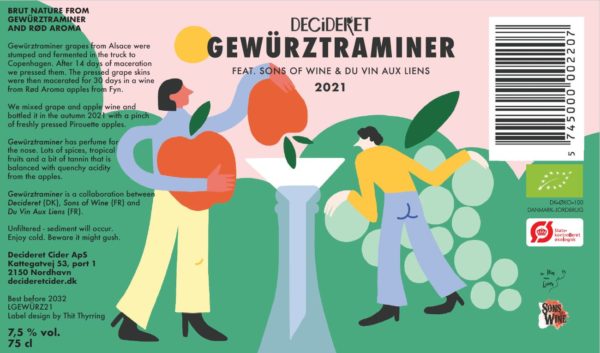 Certified Organic. Wine from Gewürztraminer grapes (20%) and apples (40% Holsteiner Cox, 40% Rød Aroma) were blended and bottled with a pinch of freshly pressed Pirouette apples. This is a collaboration between Decideret and Sons of Wine in Alsace, from whom the Gewürz wine was sourced. Apples were direct pressed; Gewürz was macerated for 12 days. Spontaneous fermentation in neutral plastic 1000L tanks, with the apple wine macerated on the Gewürztraminer grapes for 30 days. Bottled November 2021 with 9 g/l sugar from freshly pressed Pirouette apples to prompt bubbles in the bottle (pétillant naturel or ancestral method). Unfiltered, undisgorged, no SO2 added. The Gewürz obviously gives lots of tropical and spicy perfume on the nose, with lychee, lime, and pear notes on the palate; there’s a bit of tannin that’s balanced out with the lifted acidity from the apples. Yum. 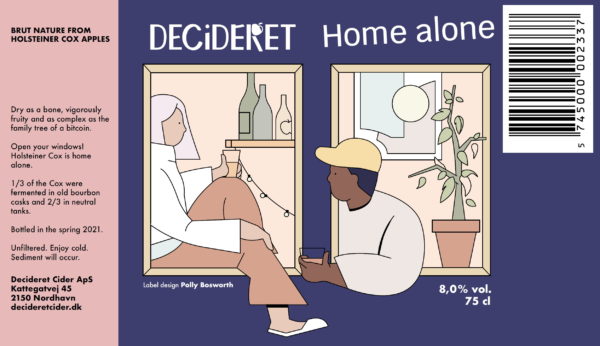 Certified organic. Single-varietal sparkling wine from 100% Holsteiner Cox apples, sourced from a single orchard called Allesø on the island of Fyn. Spontaneous fermentation: one-third in 200L bourbon barrels and two-thirds in neutral plastic 1000L tanks. Macerated on the pomace in both vessels, where élevage took place for four further months. Bottled in March 2021 with 11g/l RS to prompt bubbles in the bottle (pétillant naturel or ancestral method). Unfiltered, undisgorged, no SO2 added. A wine both robust and bracing: ruddy red and golden apple fruit, with a live wire of acidity at the core. 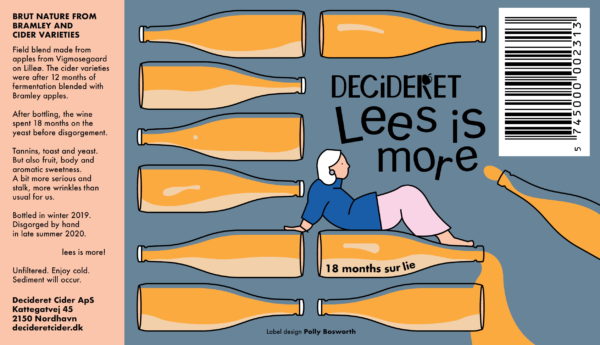 Certified organic. A “field blend” made from apples from Vigmosegaard orchard at Lilleø: Bramley (37%), mixed French cider varieties like Douce Coet, Kermerrien, Binet Rouge (54 %), and a touch of mixed garden apples (9%). The cider varieties, after harvest in 2018 and 12 months of fermentation, were blended with Bramley apples from 2019. After bottling in January 2020, the wine spent 18 months on the lees before disgorgement (Sept ’21). Unfiltered, no SO2 added. This wine has notable but not rough tannic structure, toasty and yeasty notes: it’s very Champagne-like and reminds us of some of the great Norman ciders on the Atlantic coast. There’s also fruit, body, aromatic sweetness: we think it’s one of the most complex and fine wines Decideret has made yet. 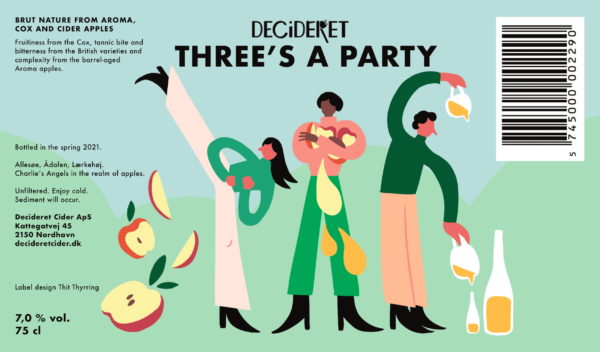 Certified organic. A conversation between three organic orchards: Allesøe, Ådalen, and Lærkehøj, two of which are on Fyn and one of which is in Zealand. Apple varieties: Rød Aroma (36 %), Holsteiner Cox (31%), Major (11%), Tremletts Bitter (11%) and Brown’s Apple (11%). The Rød Aroma was direct-pressed and fermented in 200L bourbon barrels; the other varieties received 24 hours’ maceration and fermented in neutral plastic 1000L tanks. Blended together afterward, bottled April 2021 with 12g/l RS to prompt bubbles in the bottle (pétillant naturel or ancestral method). Unfiltered, undisgorged, no SO2 added. In profile, this wine gains fruitiness from the Holsteiner Cox variety, tannic bite and bitterness from the British varieties, and complexity from the barrel-aged Aroma apples. Decideret refers to this wine as Charlieʼs Angels in the realm of apples, but you don’t have to. 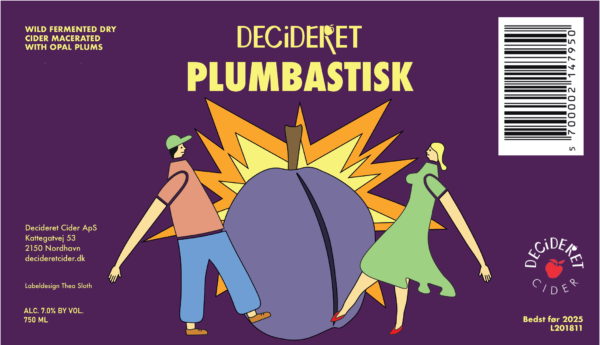 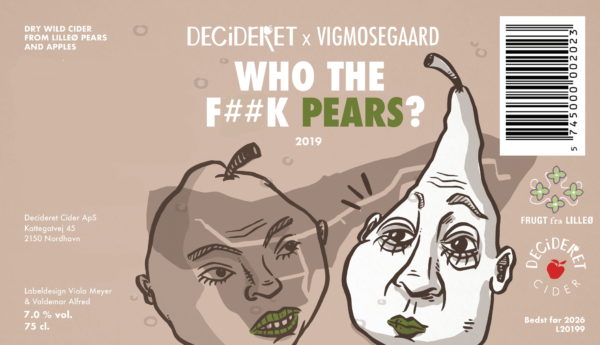 Sustainable. Williams pears (67 %) and Bramley apples (33 %). Field blend from Williams pears and Bramley apples. The fruit is grown at Claus Meyers’orchard Vigmosegaard on Lilleø where the unique surroundings are ideal for growing apples.The climate is mild with few rainy days, lots of light and mineral soil. All factors that contribute to the special terroir of Lilleø. The cider has a slightly funky nose and aromatic pear sweetness. The Bramley apple brings balance and structure with it’s fresh acidity. Unfiltered and bottled by hand in the cidery in Nordhavn, Copenhagen. Bottle conditioned. The cider is a collaboration between Decideret Cider and Vigmosegaard. Dry. 6.5 % alcohol. Disgorgement summer 2020. No added sulfur.