Oregon has rightfully earned a fantastic reputation for Pinot Noir, and more recently, Chardonnay, but if you dig a little deeper, there are a handful of producers there who are more interested in the other, those who are curious to see what else can be grown and what styles of wines can be made here.  Jeff Vejr, the owner/winemaker of Golden Cluster, is one such person.  Since his beginning in 2013, he’s been continuously striving to tell this story of the “other Oregon”.  Through his work on researching Oregon’s wine history, championing off-the beaten-path grapes, and pushing the boundaries of what was thought possible here, Jeff is one of the most exciting and interesting winemakers in the United States.

The Golden Cluster wines, the first label Jeff started with, were born out of his love for Semillon and his getting the chance to work with the incredible fruit of one of Oregon’s oldest vineyards- the David Hill Vineyard.  Planted in the 1966 to grapes such as Semillon, Flora, and Savagnin Rose, the vineyard is own-rooted and dry-farmed.  With the Golden Cluster label, Jeff’s mission is to explore these lesser known wine grapes from this historic vineyard and showcase them on their own.

Vinous Obscura was created to highlight the amazing potential of varietal diversity in Oregon.  Concentrating on vineyards in the Northern Willamette Valley and the Columbia Gorge, they aim to explore a wider view of what Oregon is and can be. As Jeff puts it “Our long term strength is through a wider vision of Oregon.  We are greater than just one wine region and one grape. We are returning to that spirit of experimentation and creativity that shaped Oregon wine in the 1880’s and 1960’s.

The Ordeaux label is one that came about almost by accident.  After going to look at a planting of Saperavi, Jeff was shown some Cabernet vines that had much smaller clusters and berries than anything he’d seen in the US before.  It turns out that’s because these were a rare French clone only recently re-introduced to the United States.  Not being passionate about a lot of current day American versions of Cabernet but being a big fan of the old-school 70s and 80s Napa Cabs, Jeff finally decided to go for it.  The results in only their second year are pretty incredible- this is a throwback to the Cabernets of an earlier era.  If there is another Bordeaux blend that has such ripeness at only 12.2% alcohol, anywhere in the world, we haven’t found it yet. 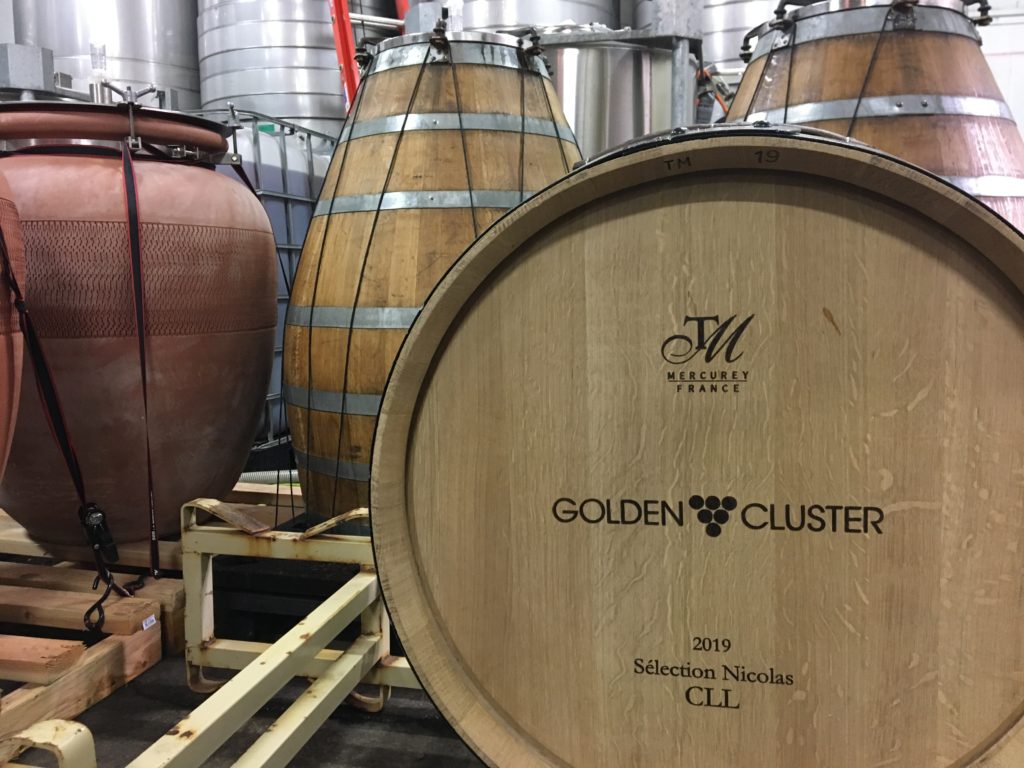 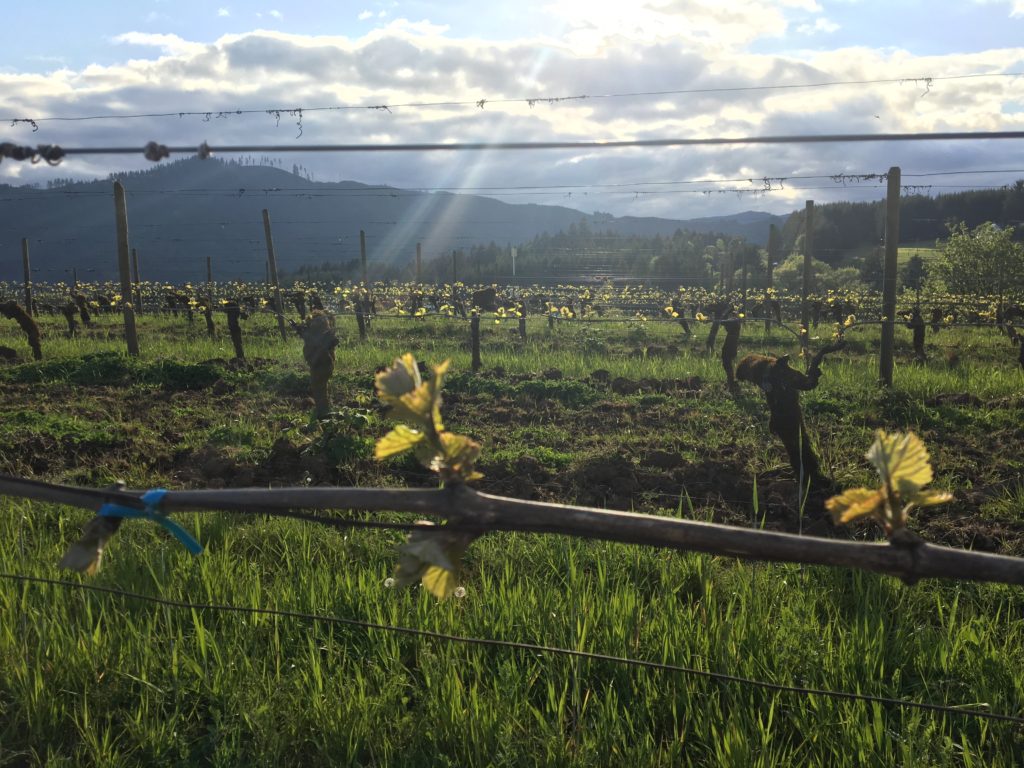 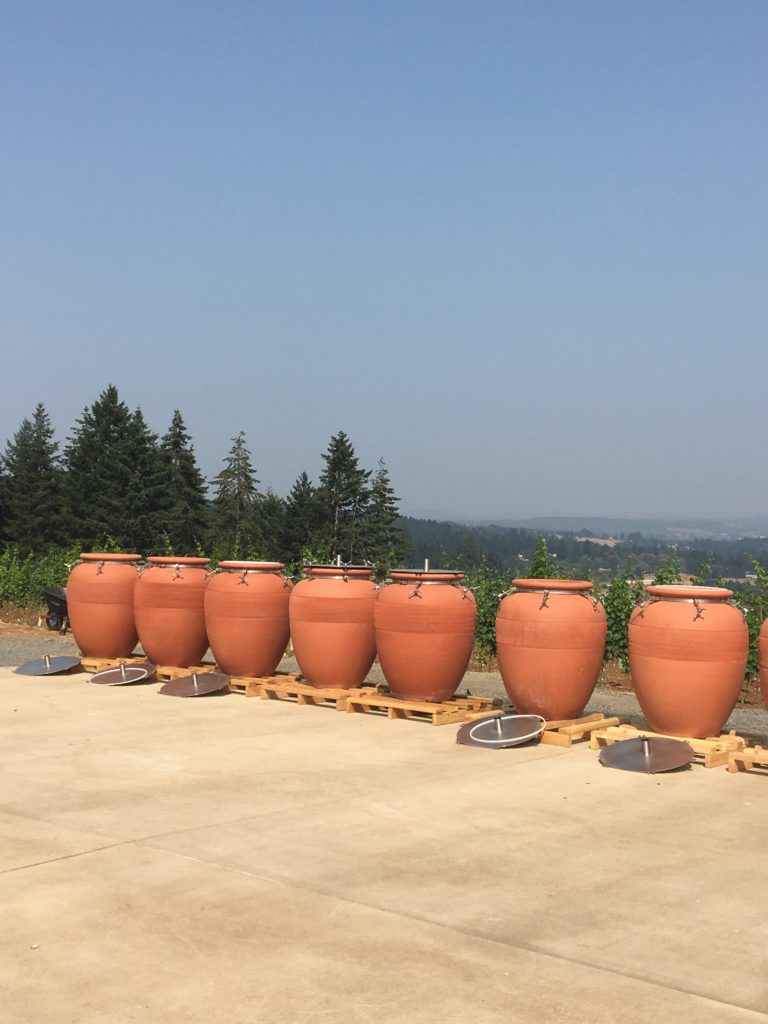 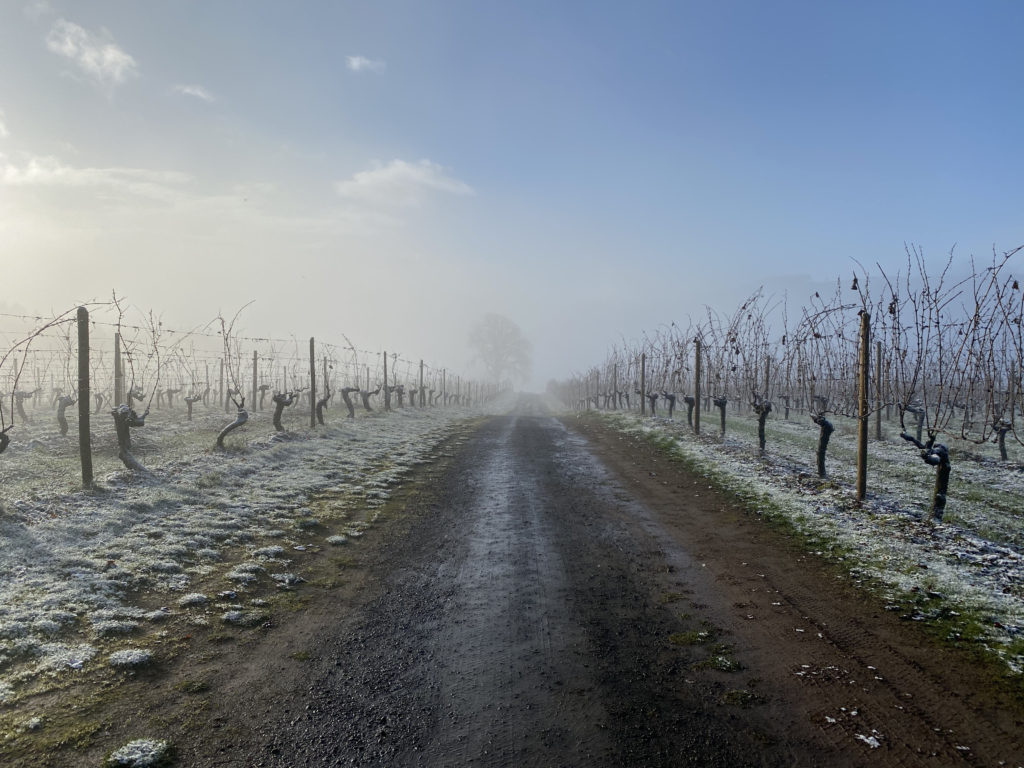 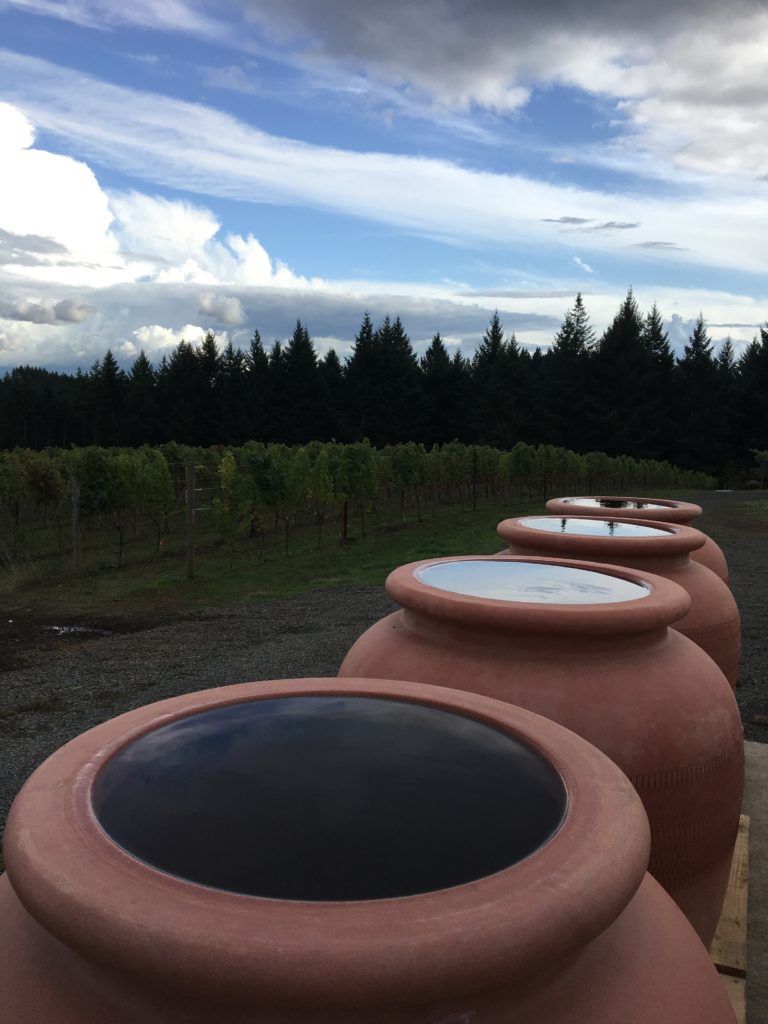 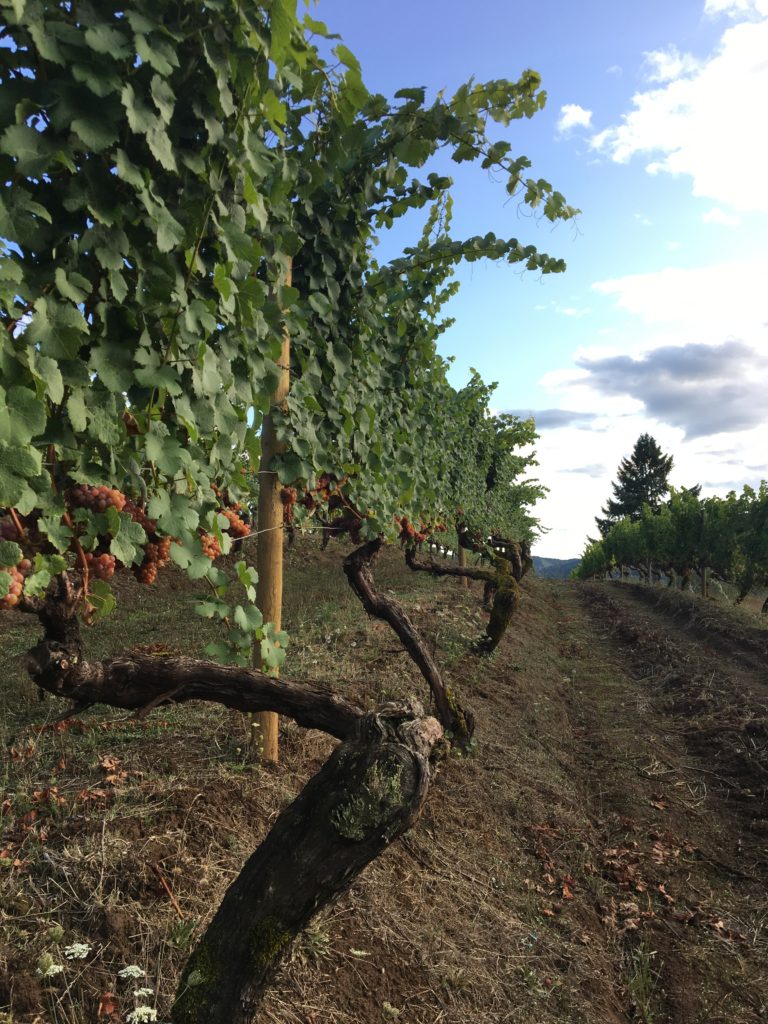 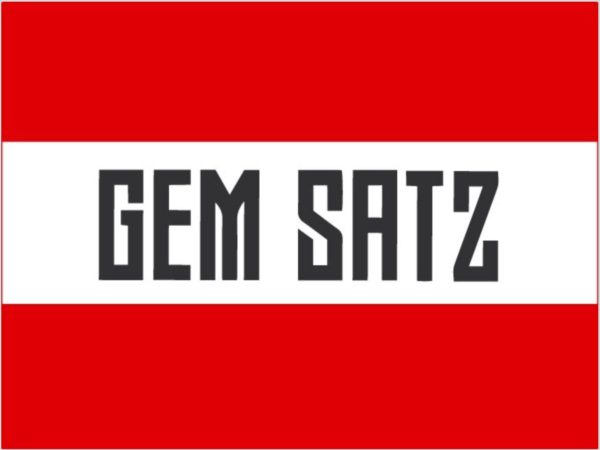 Organic & Sustainable (farmed at LIVE standards but not certified). White field blend. 14 different grapes: Gruner Veltliner, Riesling, Vignoles, Sylvaner, Sauvignon Gris, Gewurztraminer, Chardonnay, Muscat Ottonel, Muller Thurgau, Savagnin Rose, Chasselas, Kerner, Schwartzman, and Isorka. Sourced from 2 vineyards – both are dry farmed & own-rooted with the older vines being planted in 1968. The two vineyard lots are co-fermented separately. One portion was whole cluster pressed, hard settled and fermented in neutral wood. The other portion was co-fermented on the skins for a few weeks, with the skins from the other lot added in the fermenter for additional color/texture/flavor. The wines fermented in neutral French oak barrels for 16 months, then blended into a stainless steel tank then bottled. Unfined & unfiltered (vegan). 122 cases produced. 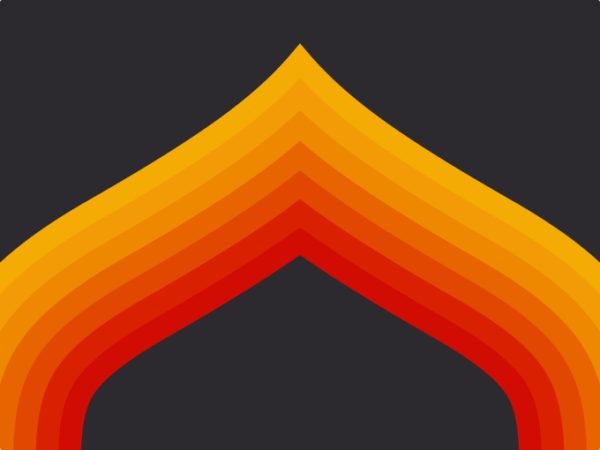 Sustainable (farmed at LIVE standards but not certified). White field blend. 14 different grapes: Gruner Veltliner, Vignoles, Sauvignon Gris, Gewurztraminer, Orange Muscat, Muscat Canelli, Muscat Ottonel, Muller Thurgau, Savagnin Rose, Kerner, Vermentino, Vidal Blanc, Schwartzman, and Isorka. Sourced from a dry-farmed, own-rooted site on loess soils at 111 meters. The grapes were destemmed and separated into 2 lots with the aromatic grapes in one lot and the non-aromatic in the other. Both lots were left on skins until dry, then the wine was pressed and hard settled. The wines aged in neutral French oak barrels for 10 months, then blended into a stainless steel tank until bottled. About 5-10% of the grapes had botrytis which contributes the exotic nature of the wine. Unfined & unfiltered (vegan). 140 cases produced. 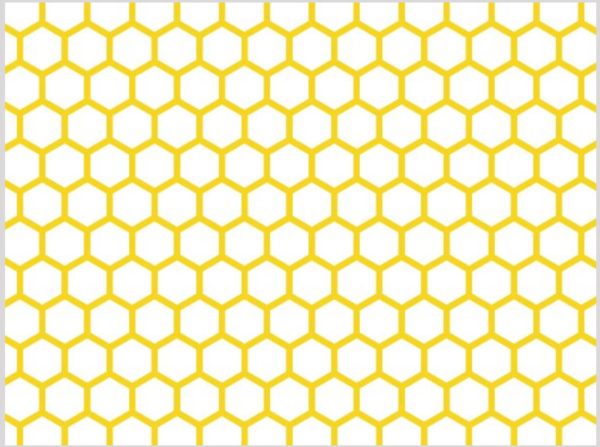 Sustainable (farmed at LIVE standards but not certified). 40% Fiano, 40% Semillon, and 20% Muscat. Sourced from a high-altitude vineyard in Columbia Gorge at 244 meters (800ft) on basalt and river sedimentary soils. The Fiano and Semillon grapes were destemmed and co-fermented on skins until the wine went dry, then settled and racked into neutral Acacia barrels. The Muscat was destemmed and mostly fermented in amphora, then pressed off and finished fermenting in a 3yr old Acacia barrel. The Muscat portion was racked 2 x’s during elevage as it went reductive in barrel. Wine was blended into stainless steel tank, Unfined & unfiltered (vegan). 88 cs produced 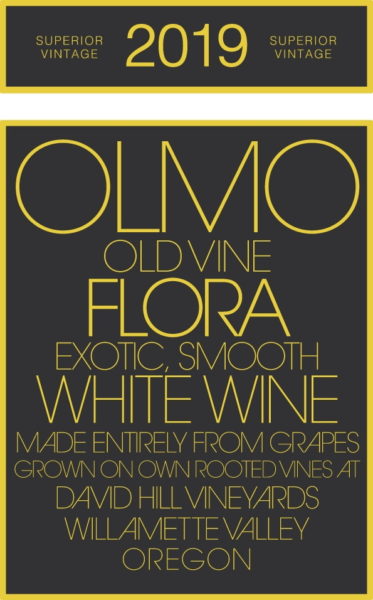 Certified Sustainable (LIVE). 100% Flora – a cross between Gewurztraminer and Sémillon. Sourced from David Hill Vineyard, the vines were planted in 1966 and are own-rooted and dry farmed. Planted on loess soils at 150 meters altitude. There are only 22 acres of Flora left in the world- at David Hill vineyard there is less than a full row of Flora. Whole cluster pressed into stainless steel tank for settling, then moved to neutral French oak barrel for fermentation and elevage into neutral 228L Damy barrels for malo and maturation for around 9 months before bottling then aged 6 months in bottle before release. Unfined and unfiltered (vegan). 47 cs produced 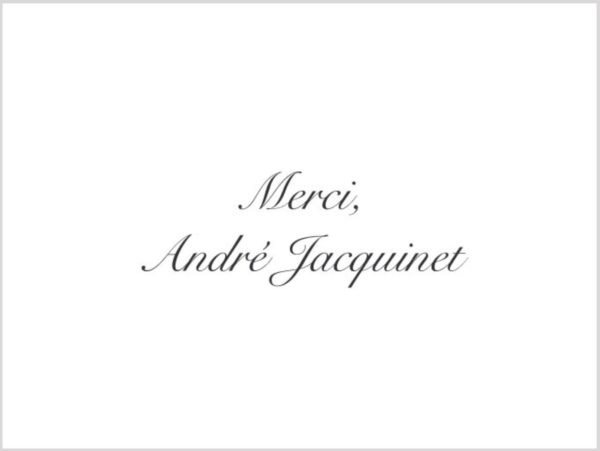 Sustainable (farmed at LIVE standards but not certified). 70% Garanoir and 30% Regent. Sourced from an own-rooted, dry-farmed vineyard at 129 meters on loess and volcanic soils. Grapes are picked together, destemmed but left whole berry and co-fermented in 1 ton open-top fermenters that were covered with a semi-permeable membrane and gassed to limit oxygen during fermentation. In one bin the skins were left in the wine after fermentation completed until they dropped to the bottom of the bin in a process called tannin crashing which adds a little bit of tannin to a wine in a gentle manner. Racked into neutral French oak barrels, elevage for 7 months, then racked to steel before bottling. Unfined & unfiltered (vegan). 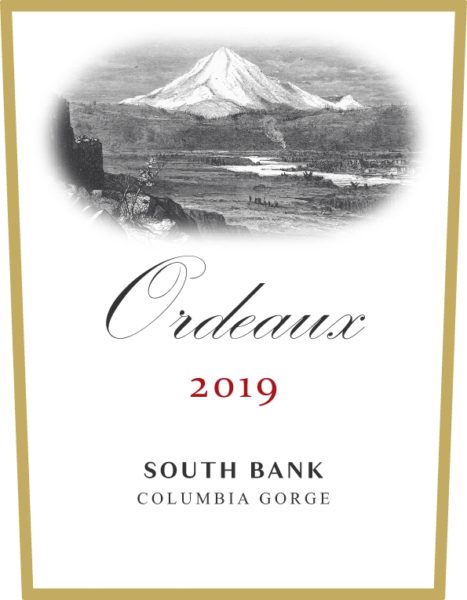 Sustainable (farmed at LIVE standards but not certified). 40% Cabernet Sauvignon, 35% Merlot, the rest equal parts Malbec, Cabernet Franc, and Petit Verdot. Dry-farmed, own-rooted vines planted at 244 meters on basalt and loess soils. The Cabernet clones here are old French clones that only recently became available in the United States again for the first time in many years. The clusters and berries are both smaller than regular Cab clones. The Cabernet Sauvignon and Merlot are destemmed and fermented in 390 L wooden egg fermenters. Malbec, Cabernet Franc, Petit Verdot were fermented separately in 1 ton open top tanks. Both had daily punchdowns but no pumpovers. Cab & Merlot pressed then racked back to wooden eggs and the others pressed then racked to neutral barrels for 10 months elevage. Unfined & unfiltered (vegan). 250 cs produced. 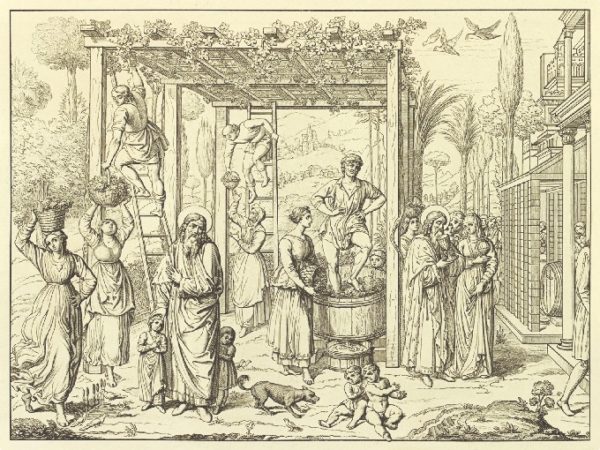 Sustainable (farmed at LIVE standards but not certified). 100% Sagrantino. Dry-farmed, own-rooted vines planted at 244 meters on basalt and loess soils. Destemmed (whole berry) and fermented in open top tanks until dry. Sagrantino has the thickest skins of any grape, so great care is taken to carefully manage the tannins. Only one punchdown is done per day (no punchdowns). The wine is left to ferment on the skins to complete dryness plus a little bit of extra time in order to emulate how Sagrantino is traditionally vinified. Racked into neutral Hungarian Oak puncheon, elevage for 24 months, no sulfur additions, then racked into stainless steel tank, then bottled. Unfiltered & unfined (vegan). 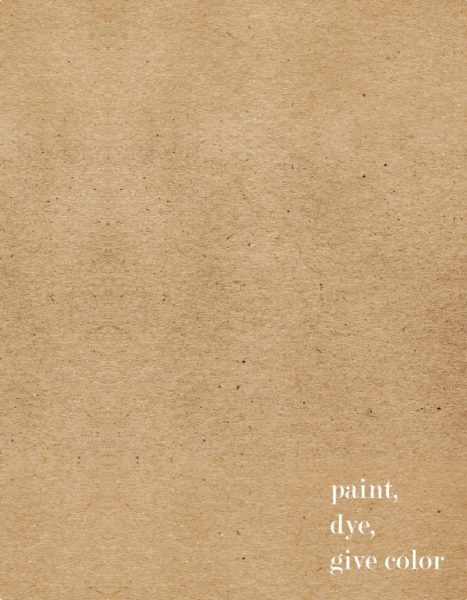 Sustainable (farmed at LIVE standards but not certified). 100% Saperavi. Dry-farmed, own-rooted vines planted at 244 meters on basalt and loess soils. Destemmed and kept whole berry with fermentation in 2 amphora (which were made in Oregon) for 20 days on the skins with punchdowns done by hand. Both amphora are pressed off and the wine is then returned to 1 amphora where it’s aged for 11 months. This was one where the wine never needed any SO2 at any point, so none was added. Unfined & unfiltered (vegan). 124 cases produced. 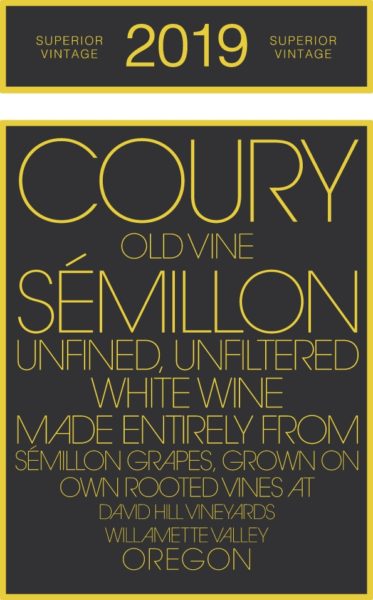 Certified Sustainable (LIVE). 100% Semillon. Sourced from David Hill Vineyard, the vines were planted in 1966 and are own-rooted and dry farmed. Planted on loess soils at 150 meters altitude. 2018 was a wet year plagued with a lot of mildew as well as rot- both noble and otherwise. From these challenging conditions came one of the best wines Jeff has ever made. Completely destemmed, hard settled for 48 hours, racked into another stainless steel tank with fresh lees from a Muller Thurgau fermentation. The wine was racked heavily and this “lees washing” process was deployed a 2nd time. Once the musty levels were minimized, the juice was racked into neutral French oak barrels to ferment and go through a natural ML conversion. The wine was in barrel for 10 months, then spent 18 months in bottle before it was released. Unfined and unfiltered (vegan). 48 cases made.