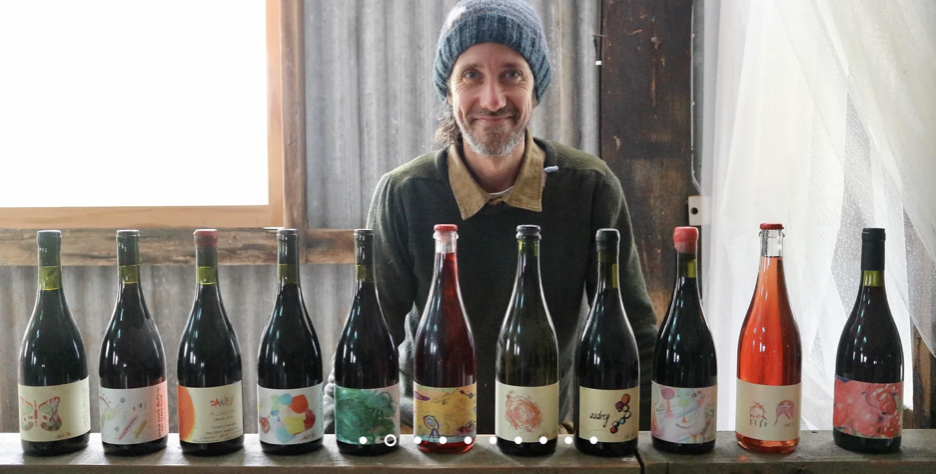 James Erskine is a ray of sunshine: thoughtful, gentle, and fiercely earnest, if you can be such a thing. He’s also a winemaker who knows what he believes, growing and refining his focus along with the evolution of his wine label Jauma (Catalan for ‘James’), begun in 2010. He’s one of the pioneers of natural wine in the recent explosion of great younger, independent producers working in the Adelaide Hills, and his single-vineyard Grenaches rank among some of the finest examples of a new Australia, onethat doesn’t rely on weight, power, or opacity for beauty. James produces Grenache in its highest expression—aromatic, vibrant, and transparent.

James long has worked with a farmer partner, Fiona Wood, for most of the vineyards from which he sources fruit. Everything is certified organic, but Fiona, her father Ralph, and James’ other farmer partner David Gartleman practice many viticultural strategies that extend past organics, aiming for what James calls “a biological farming system.” Grapes are sprayed with aerated compost tea to avoid sulfur & copper applications for mildew and fungi; some vineyards have biodynamic preps 500 and 501 applied. In various vineyards, there are over two dozen cover or co-crops for biodiversity; close attention is paid to not over- or under-cropping of the plants. With his partner Sophie, James also has his home farm, where the two of them directly manage a few estate vineyards—three acres planted in 2020, another half acre in 2021, and one more half acre in 2023, if all goes well.

The Jauma wines are capable of showing a real range: ‘Disco Special’ and ‘Tikka’ are great examples of playful, quaffable Aussie reds, despite the inclusion of the brooding Shiraz, while wines like ‘Alfred’s’ and ‘Ralph’s’ show that the southern Rhône is not the only place in the world where Grenache is made into some of the world’s most singular natural iterations. Jauma is a special producer—we’re delighted to share his work with the East Coast.

Certified organic. 100% Grenache from Clarendon. Taken from the single vineyard called ‘Ralph’s,’ but the bottom half of the block—here, these 28 year-old vines receive less natural water and are smaller vines than in the Ralph’s parcel / bottling. This wine is richer: the berries are smaller and ripen faster. ‘Alfred’s’ is highly aromatic and fruit-driven, with a deep mineral undertone from the ironstone-rich soil. It’s vinified with all free-run juice, no skins in the pressing—the same technique for all the single-vineyard Grenaches—then aged in used barrel for up to one year. Harmonious and perfumed—a Grenache masquerading as lacy Pinot Noir if there ever was one. Unfined, unfiltered, zero added SO2.

Certified organic. 70% Shiraz, 30% Grenache. Direct pressed into stainless steel tanks and then blended for the final cuvée. The fruit from this wine comes from multiple vineyards across the McLaren Vale, in particular the ‘Ralph’s’ Shiraz vineyard when it is very productive. A cuveé that’s not made every year, but when it’s made, it’s a blend intended to be fun and easy. Roses, beach plums, bramble. It’s disco, not your dad’s Shiraz. Unfined, unfiltered, zero added SO2.

Certified organic. 100% Grenache. One of James’ single-vineyard bottlings, named ‘Ralph’ after the owner of the block, viticulturalist Fiona Wood’s father. This bottling is from the same vineyard as ‘Alfred’s,’ but these 28 year-old vines are at the top of the block, where there’s more natural water available to the dry-farmed vines. As a result, this block yields more bunches, lower alcohol, and slower-ripening fruit. It’s vinified with all free-run juice, no skins in the pressing—the same technique for all the single-vineyard Grenaches—then aged in used barrel for up to one year. ‘Ralph’s’ always displays an anise-like flavor on top of blackberry and raspberry, with a distinct mineral backbone that comes from the ironstone-dominated soils of the vineyard. Perfumed and elegant. Unfined, unfiltered, zero added SO2.

Certified organic. 80% Shiraz, 20% Grenache. Direct pressed into stainless steel tanks and then blended for the final cuvée. The fruit for this wine comes from two of James’ top single vineyard sites, ‘Ralph’s’ (the Shiraz) and ‘Lilies’ (the Grenache). Like ‘Disco,’ this cuvée is intended to be fresh and easy-going; it takes well to a slight chill, too. Blackberries and dark currant, sweet spice, and wet forest earthiness, with a clear line of acidity keeping things fresh. Unfined, unfiltered, zero added SO2.

Certified organic. 100% Grenache. One of James’ single-vineyard Grenaches; this is his farmer partner Fiona Wood’s personal block of 80+ year-old vines, planted on deep white sand. The block is vinified with all free-run juice, no skins in the pressing—the same technique for all the single-vineyard Grenaches—then aged in used barrel for up to one year. These old, carefully tended Grenache vines routinely give fruit that renders simultaneously bold and ethereal wine: ‘Tullah’ tends to be light in color and with a complex aromatic profile of rose, raspberry and wild bush. Unfined, unfiltered, zero added SO2.

Certified organic. 100% Chenin Blanc. The Chenin is from a single-vineyard site tended by James’ legendary cheesemonger/farmer friend Lulu, on a steep, east-facing block. It’s grown in soil types James calls classic Blewitt Springs: ‘white beach sand over yellow clay. The sand is about 3m deep and is just like the local beaches. It’s quite fun to be bogged in!’ Racy, ripping, ocean-inflected Chenin pét-nat, one of the sharpest and brightest sparklers we’ve tasted. Grapes are direct pressed and fermented in tank, then bottled with around six g/l residual sugar so the wine can ferment the rest of the way in bottle to dry and bubbly. Unfined, unfiltered, zero added SO2.