Fraternal twins Bert and Fay Salomon are the 9th generation to take over their family’s historic winery, a pillar of quality in the Wachau Valley since 1792. One of the oldest family-owned wineries in Austria, they were the first to export their wines to the United States in the 1930s and are founding members of the Traditionsweingüter Österreich, the group tasked with classifying Austria’s most important vineyards in a system resembling that of Burgundy. Salomon’s top vineyard sites, perched on south-facing terraces along the Danube River, are all designated Erste Lage ÖTW, or Grand Cru, which might please the Capuchin Monks who planted them should they have lived long enough to find out.

Like their father, Bert Salomon Sr., Fay and Bert believe that great wines are made from living soils and don’t wear makeup. The path to a beautiful bottle is through meticulous, environmentally conscious care in the vineyard and thoughtful work in the cellar. Cover crops are grown between rows to maintain vital soils and encourage biodiversity, and under-vine management is done manually, without the use of sprays (there has been no use of herbicides in more than a decade). Sheep’s wool is hung to repel hungry deer from the nearby forrest, and natural pheromones are used to prevent destruction by a local butterfly. The wine is handled gently in the cellar – not manipulated, but rather protected – as it reaches toward a pure expression of its time and place.

The Salomons farm 30 hectares of vines in and around Stein in the Kremstal DAC, almost all of it Grüner Veltliner from deep loess soil and Riesling from primary rock terraces.  The clarity and pure fruit of their traditional wines never gets tired, but for Bert and Fay there’s always room for something new – don’t miss their “Wolke für Zwei” (Cloud for Two) Riesling pet nat and perfectly savory “Alma” amphora Riesling.

"So good for so long, it's easy to overlook Salomon Undhof, whose deeply mineral and transparent wines are some of the country's most profound. Elegant and refined are words that come to mind. These wines dazzle with their quiet, staid solidity." - Raj Parr & Jordan Mackay, The Sommelier's Atlas of Taste 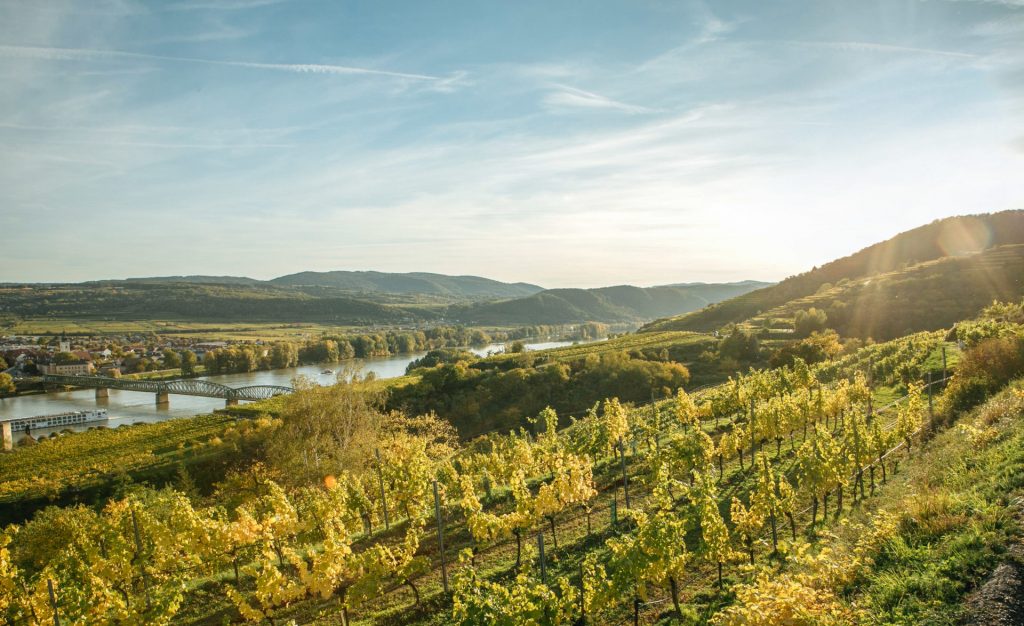 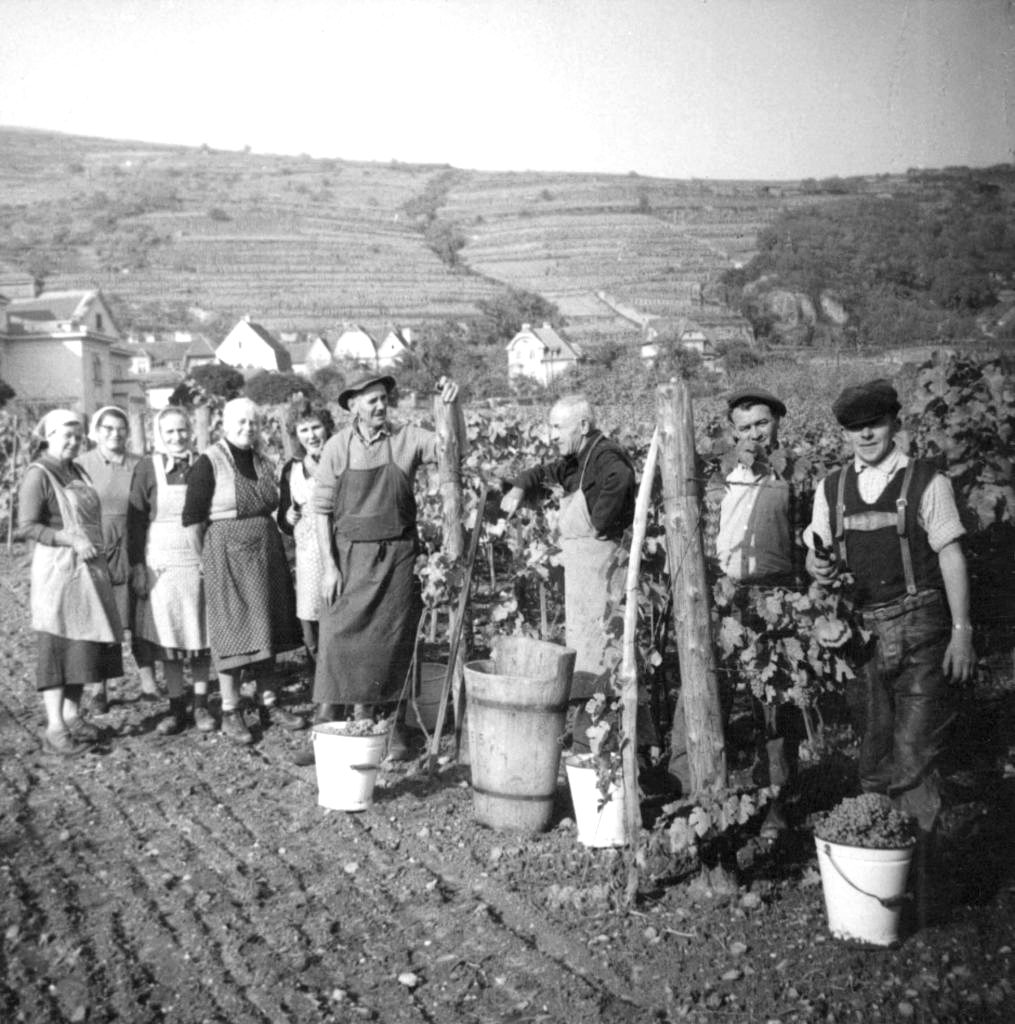 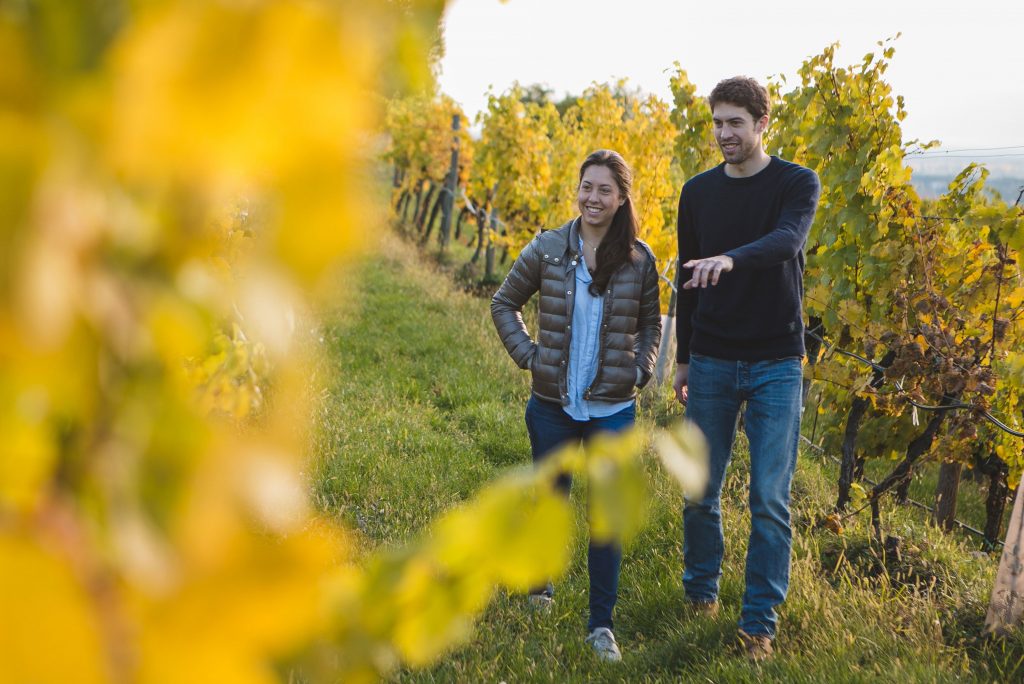 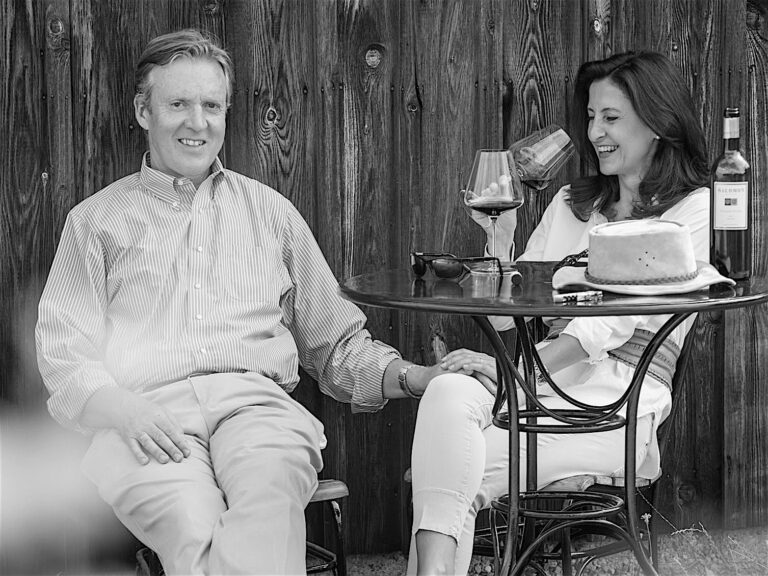 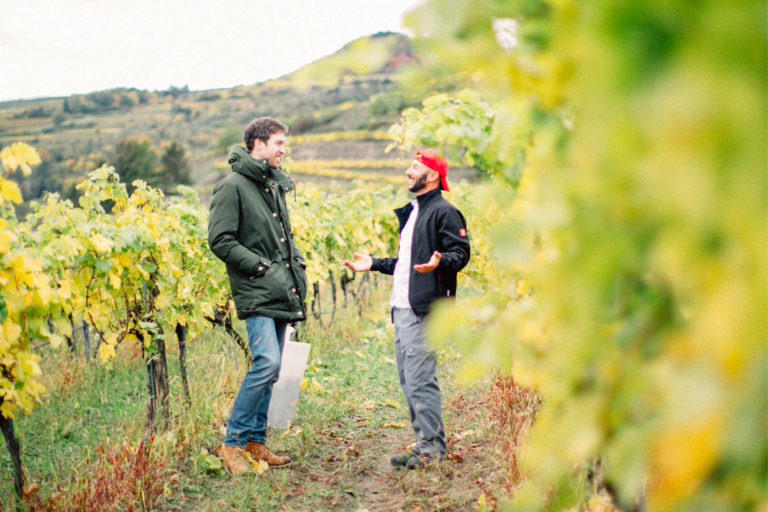 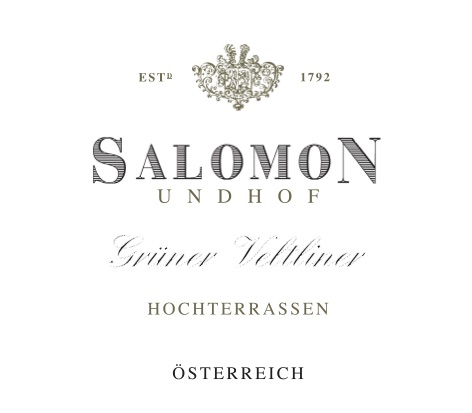 Certified sustainable. Sourced from high-altitude terraces in Stein and Krems. From the youngest Gruner vines of the estate, up to 25 years, planted in loess soils on terraces overlooking the Danube. Hand-harvested, destemmed, and pressed. Spontaneous fermentation in stainless steel for 3-4 weeks following by ageing on the lees for 2 months in steel. Hochterrassen literally translated means “high up terraces” and the Gruner from here displays the brighter acidity and lower alcohol expected from the cooler climate here.

Kremstal DAC Reserve. Erste Lage ÖTW (Grand Cru). The estates oldest GV vines at 70-80 years. Deep deposits of loess over slate stretch between the Kögl and Wachtberg vineyards above the city of Krems and overlooking the Danube. Harvested by hand and raised in stainless steel. 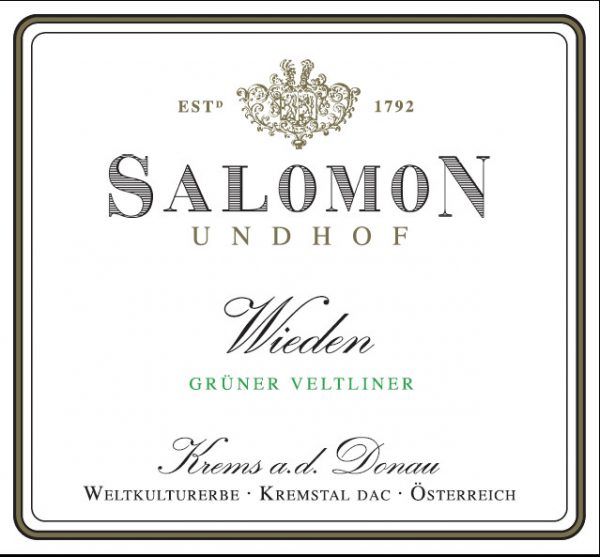 Kremstal DAC. From Wieden, the only remaining vineyard within Krems-Stein city limits, plus a small parcel of the same clone planted on the terraces of the Kremser Kreuzberg. 25 year old vines on loess soils with sand and stone. Harvested by hand and vinified in stainless steel with native yeasts. 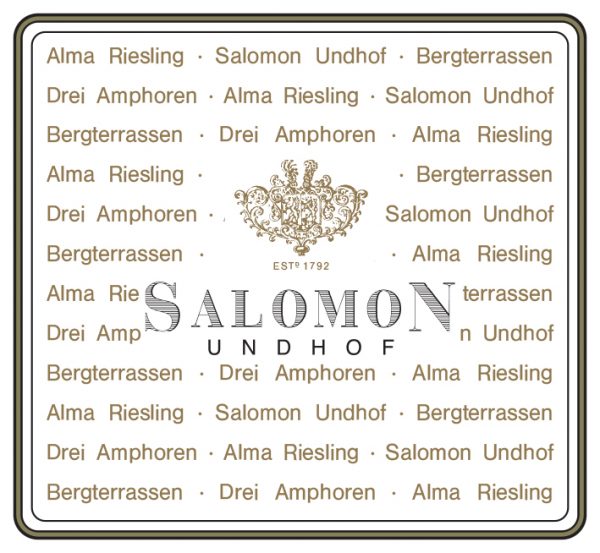 100% Riesling. From the Grillenparz vineyard. Conglomerate soils of Danube riverbed pebbles. Harvested by hand and fermented on the mash in amphorae. Racked off the skins and bottled after Easter of the year following harvest. 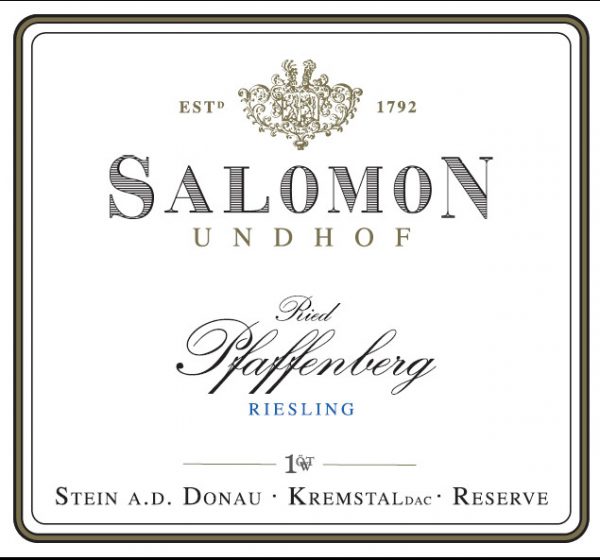 Certified sustainable. Erste Lage ÖTW (First Growth). Along with the Kogl, the Pfaffenberg has the family’s oldest Riesling vines at 60-80 years old. Steep, southeast-facing terraces close to the Danube hence exposed to wind and temperature extremes. 250-375 meters altitude. The crystalline bedrock consists of gneiss, mica schist, and, in some areas, amphibolite. The soils are hard, stony, and largely non-calcareous. Hand-harvested, destemmed and crushed with 12 hours of maceration on the skins, then pressed off. Native yeast fermentation in stainless steel for 10 weeks following by ageing on the lees in steel until bottling in May. 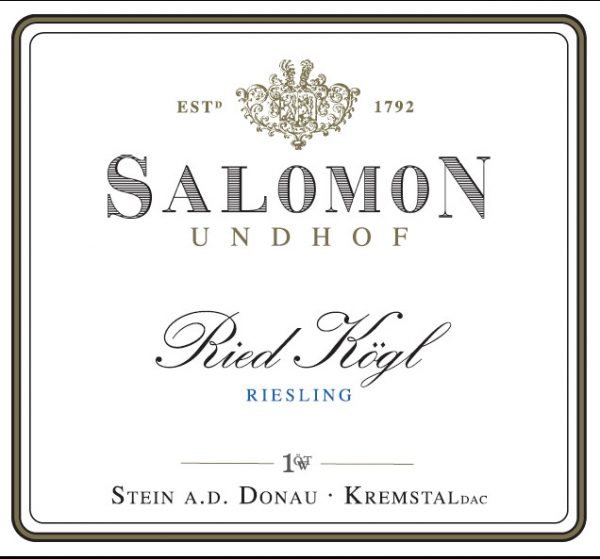 Kremstal DAC Reserve. Erste Lage ÖTW (Grand Cru). The family’s oldest Riesling holdings are here and in the Pfaffenberg, with vines ranging from 60-70 years old. Heavily weathered bedrock soils (gneiss and schist) on south-facing terraces above the Danube. Hand harvested and fermented in stainless steel with native yeasts. Bert Jr analyzed the soil here parcel by parcel as part of his master’s thesis and plans to experiment with micro ferments of parcels where the soils vary. 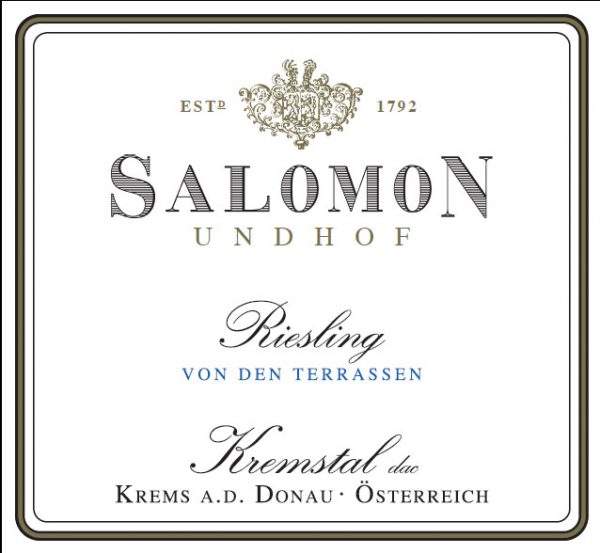 Certified sustainable. Sourced from high-altitude terraces in Stein and Krems. From the youngest Riesling vines of the estate, up to 25 years. Planted on primary rock (gneiss) terraces overlooking the Danube. Hand-harvested, destemmed, and pressed. Spontaneous fermentation in stainless steel with native yeasts. Aged on the lees in steel until bottling in February.